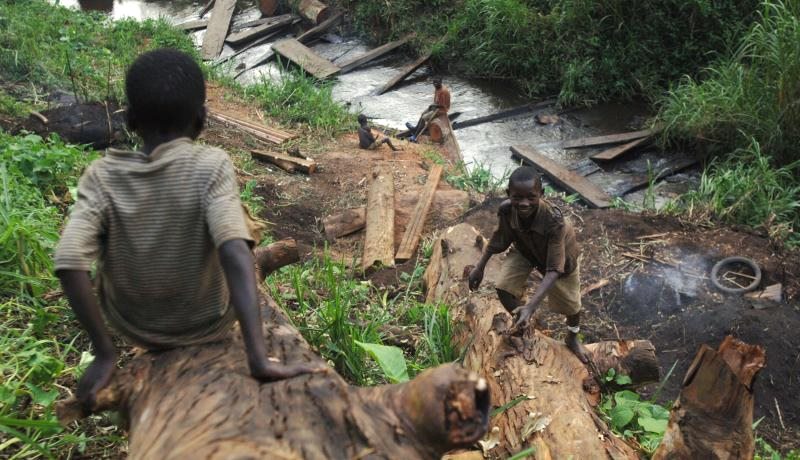 Children slide down logs 13 June 2008 in Katwe, 160km north of the provincial capital Goma. Although nearly all industrial logging in the DRC is licensed in some way, there are widespread and serious breaches of regulations in the production of much of this timber. Read more here. Image: Lionel Healing / AFP / Getty

The Congolese Minister of Environment, Amy Ambatobe, has reinstated 6,500 km² of logging concessions that were cancelled in August 2016 by the then Environment Minister Robert Bopolo following instructions from then Prime Minister Augustin Matata Ponyo.

Two of the concessions overlap with a recently discovered peatland deposit covering 145,000 km² and believed to contain 30 billion tons of carbon. Expanding industrial logging into these areas is considered to be among the biggest threats facing them.

“We are alarmed that the Minister of Environment has illegally reallocated these concessions in breach of the 2002 moratorium on new industrial logging titles despite their earlier cancellation. Greenpeace Africa calls on the Congolese government to revoke these concessions once more and, this time, sanction the perpetrators,” said Irene Wabiwa Betoko, Greenpeace Africa Senior Campaign Manager.

In October 2017, the Norwegian-funded Central African Forest Initiative (CAFI) greenlighted the transfer of USD 41.2 million to the DRC’s national fund for Reducing Emissions from Deforestation and forest Degradation (REDD+). This was supposed to be done only after the Congolese government put in place a “robust action plan” with internal oversight measures. However, CAFI’s failure to insist on measures to prevent future breaches of the moratorium has meant that significant funds have been disbursed in the absence of due diligence.

Jo Blackman, Campaign Leader at Global Witness, said: “We call on CAFI to immediately suspend future funding until the DRC’s government cancels these concession allocations, guarantees that the moratorium will be respected and sanctions those responsible for these illegalities. 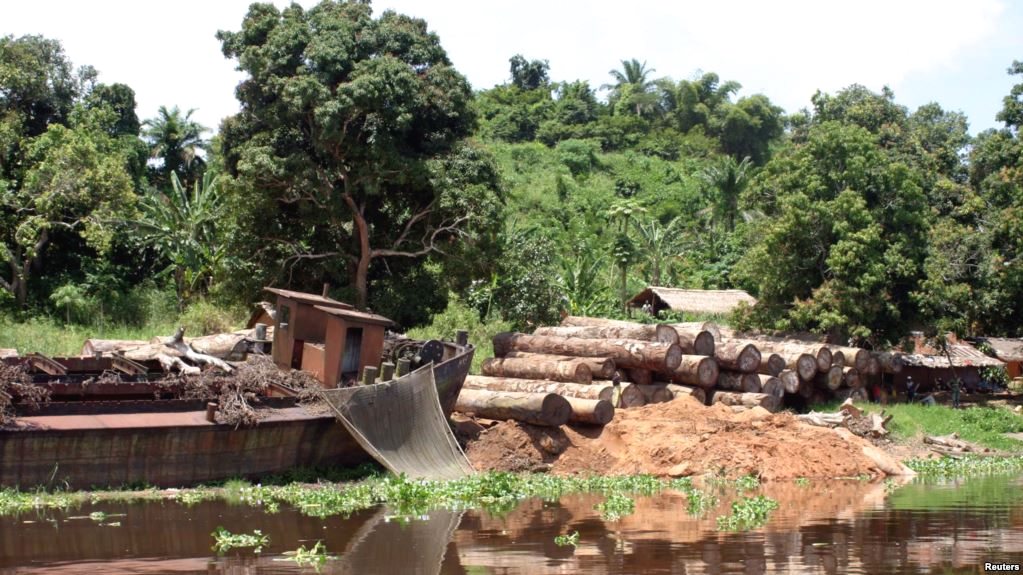 Logs lie next to a rusting barge on the banks of the Congo River, Oct. 7, 2004. Greenpeace reported at the time that the president of the Democratic Republic of the Congo was finally backing a largely ignored ban on new logging that had been approved in 2002. But several illegal permits have been issued since then. Read more here.

Lars Løvold, Director of Rainforest Foundation Norway added: “It is surprising that elements within the DRC government apparently are willing to risk cancelling the whole 200 million dollar agreement between CAFI and DRC by insisting on short-sighted illegalities.”

During a photo opportunity aboard the Greenpeace ship Esperanza on October 31 2017, the DRC Environment Minister solemnly committed himself to the protection of the country’s peatlands by stating:

“I’m sending here a message to the entire international community for the mobilisation of funding and to help DRC Government to protect these sensitive areas and to improve the livelihood of communities living around these peatlands.”

Simon Counsell, Executive Director of Rainforest Foundation UK, said: “The issuing of new logging concessions sends a clear signal to the international community that the DRC government is abandoning any pretence at reducing emissions from deforestation and forest degradation. Any new large-scale logging operations on peatland forests in particular are likely to cause massive emissions of greenhouse gases. Donors such as Norway and the World Bank will need to reconsider whether REDD programmes in DRC are credible and supportable.”