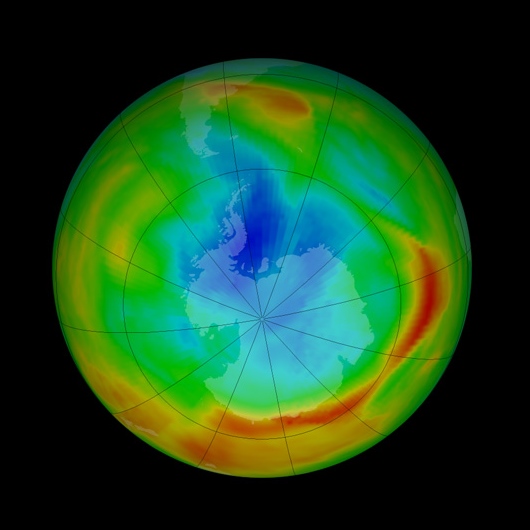 The stratospheric ozone layer protects life on Earth by absorbing ultraviolet light, which damages DNA in plants and animals (including humans) and leads to skin cancer.

Prior to 1979, scientists had not observed concentrations below 220 Dobson Units. But in the early 1980s, through a combination of ground-based and satellite measurements, scientists began to realize that Earth’s natural sunscreen was thinning dramatically over the South Pole each spring. This large, thin spot in the ozone layer came to be known as the ozone hole.

An image of series on NASA’s Earth Observatory website shows the size and shape of the ozone hole each year from 1979 through 2013. The measurements were made by NASA’s Total Ozone Mapping Spectrometer (TOMS) instruments from 1979–2003 and by the Royal Netherlands Meteorological Institute (KNMI) Ozone Monitoring Instrument (OMI) from 2004–present. Purple and dark blue areas are part of the ozone hole.

As the images show, the word hole isn’t literal; no place is empty of ozone. Scientists use the word hole as a metaphor for the area in which ozone concentrations drop below the historical threshold of 220 Dobson Units. Using this metaphor, they can describe the hole’s size and depth. These maps show the state of the ozone hole each year on the day of maximum depth—the day the lowest ozone concentrations were measured.

Records in depth and size haven’t occurred during the same years (the largest ozone hole occurred in 2006), but the long-term trend in both characteristics is consistent: from 1980 through the early 1990s, the hole rapidly grew in size and depth. Since the mid-1990s, area and depth have roughly stabilized (see the Ozone Hole Watch website for annual averages). Year-to-year variations in area and depth are caused by variations in stratospheric temperature and circulation. Colder conditions result in a larger area and lower ozone values in the center of the hole.

An uneven seam in the contours of the data marks the location of the international date line. Ozone data are measured by polar-orbiting satellites that collect observations in a series of swaths over the course of the day; the passes are generally separated by about 90 minutes. Stratospheric circulation slowly shifts the contours of the ozone hole over the course of the day (like winds shift the location of clouds). The contours move little from any one swath to the next, but by the end of the day, the cumulative movement is apparent at the date line.

The ozone hole opened the world’s eyes to the global effects of human activity on the atmosphere. It turned out that chlorofluorocarbons (CFCs)—long-lived chemicals that had been used in refrigerators and aerosols sprays since the 1930s—had a dark side. In the layer of the atmosphere closest to Earth (the troposphere), CFCs circulated for decades without degrading or reacting with other chemicals. When they reached the stratosphere, however, their behavior changed. In the upper stratosphere (beyond the protection of the ozone layer), ultraviolet light caused CFCs to break apart, releasing chlorine, a very reactive atom that repeatedly catalyzes ozone destruction.

The global recognition of CFCs’ destructive potential led to the 1989 Montreal Protocol banning the production of ozone-depleting chemicals. Scientists estimate that about 80 percent of the chlorine (and bromine, which has a similar ozone-depleting effect) in the stratosphere over Antarctica today is from human, not natural, sources. Models suggest that the concentration of chlorine and other ozone-depleting substances in the stratosphere will not return to pre-1980 levels until the middle decades of this century. These same models predict that the Antarctic ozone layer will recover around 2040. On the other hand, because of the impact of greenhouse gas warming, the ozone layer over the tropics and mid-southern latitudes may not recover for more than a century, and perhaps not ever.

Ed’s note: That makes me wonder about all those dreadful chlorine swimming pools around. Does that chlorine gas leaving the pools play a role here? Even in salt water pools the chlorinator turns the salt into chlorine, so it is no better at all. What do you think?