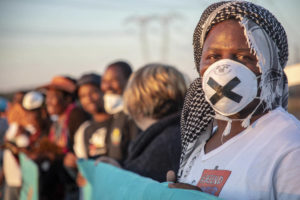 For many climate justice advocates, the trajectory of the Covid-19 pandemic is unsurprising, as it mirrors the very systems and structures that underpin the climate crisis. A new report by the Institute for Economic Justice, 350Africa and the Climate Justice Coalition attempts to show the way to a Just Recovery.

The Covid-19 pandemic has drastically altered the lives of the vast majority of the world’s population. Varying forms of lockdown, social distancing, mask wearing and major restrictions on work, travel and trade have been implemented to slow the virus’s spread and limit its impact.

The Covid-19 crisis exposes how our global economy shifts the worst impact of a crisis onto the most vulnerable and how mainstream economic policy has led to this. This is the same economy and economic policy that is destroying our environment, including through excessive greenhouse gas emissions, air and water pollution and loss of biodiversity. We must envisage something new.

A Just Recovery means tackling the global economic developments, strongly present in the South Africa economy, which have contributed to the devastation caused by the Covid-19 pandemic including:

Our response to the crisis and plans for a recovery must be different. It must be people-centred and designed to overcome, and not entrench, existing inequalities.

The pandemic is giving us a window into the types of problems we will face as the climate crisis takes hold. We must leverage this moment to begin to build institutions and social solidarities that can dismantle, rather than strengthen, the current order.

The South African government was initially praised for taking proactive and aggressive steps to fight the pandemic. However, the economic response has been extremely weak and threatens to place an even harsher burden on an already crippled society. As a result of deep and worsening inequality, poverty and unemployment South African households have poor buffers for dealing with shocks like this. We have few decent public services and households are heavily indebted and therefore without savings. Many livelihoods, particularly of families reliant on a single breadwinner, are threatened by job losses.

No going back to normal

As communities, governments and citizens we must ensure that the recovery from Covid-19 is a just one not a return to the status quo. The fight for better alternatives is already underway from communities and initiatives across South Africa calling for a just transition, a Green New Deal and a Green New Eskom. These initiatives – and many others – inform the content of this report, which advocates for a Just Recovery.

This is underpinned by principles that build resilience to future crises:

We propose six ways in which to give life to these principles and to ensure they are relevant to the South African context. These measures simultaneously set South Africa on the path towards a transition away from reliance on fossil fuels, while transforming our deeply unequal economy. These interventions embody the notion that climate, racial and gender justice are intersecting struggles that require a fundamentally different economy.

A Just Recovery must reclaim the power of public investment that is geared towards the public provision of goods and services. While some environmental movements call for a reduction in consumption, much of the world’s population struggles to access even basic goods and services. Rather than “green austerity”, we argue for an expansion of public services in a manner that is compatible with a decarbonised economy and the advancement of human wellbeing and progress.

A transformative and expanded public transport system and public housing are examples of this. These can mitigate against spatial inequality. They can grow the economy and fight both unemployment and poverty through reducing what people spend on transport and the time spent commuting, improving support and infrastructure for pedestrians and cyclists and by stimulating consistent and well-paying jobs across manufacturing, housing, transport, and infrastructure maintenance. And they can address climate change through reduced carbon emissions and lowering harmful land usage.

A Just Recovery must respond to the crises of care that the pandemic highlights – our society’s inability to provide adequate caring labour such as the work needed to raise a child or look after the elderly, an indispensable component of human well-being. The “purple economy”, as a parallel to the green economy, aims to prioritise and value care work in our societies. It insists that this should also be seen as work, should not be undervalued and should not be only the responsibility of women. It also means the prioritisation of investment in quality social infrastructure such as care, health and education services.

This has both social and economic benefits, and has been shown to create more jobs and advance gender equity. A study from ITUC found that investing 2% of GDP in care activities and infrastructure would increase overall employment by 2.4 to 6.1%. In addition, greater investments must be made in rural economies, as environmental restoration projects such as tending the land are heavily gendered, and will be a key part of a just transition.

Transitioning to a low-carbon energy system

The Covid-19 crisis has underscored the urgent need for a resilient energy system that supplies reliable and affordable energy. This is especially critical to sectors such as health which are under unprecedented pressure from crises including pandemics and the impacts of climate change. Transitioning to renewable energy will bring public and environmental health benefits, as well as being one of the primary means to mitigate climate change. The transition must also ensure affordable access for all households, especially to low- or no-income households that currently have limited or no access to reliable electricity.

All of these proposals speak to changing the fundamental structure of the South African economy – sustainable “structural transformation”. This is different to the “structural reforms” that the National Treasury speaks of. These emphasise the need for less regulation, cutting of budgets and policies supposedly aimed at increasing investor confidence. However, these policies have not worked to build an inclusive and responsive economy, and have entrenched inequality, poverty, unemployment and ecological destruction.

The current structure of ownership concentrates power among a small group of people. They are able to influence both policymaking and company decisions in a manner often not in the interest of the majority or the environment. While a greater role for the state is essential, we should not be caught in a false choice between corporate ownership and large, centralised, state-owned enterprises, which themselves often adopt the management principles of corporations. The dominance of both of these institutional forms is what has also allowed state capture to flourish.

Instead, democratic public ownership must be part of the solution. This means that assets, services and enterprises are held collectively by all people through co-operatives, community ownership or worker control, usually in a specific geographic area. We must complement changes in ownership with increased participation by various stakeholders in key decisions, such as through participatory budgeting processes and greater worker involvement in decision-making, while limiting the power of large corporations. Democratic oversight of the economy must be enshrined, with the end goal being the provision of goods for society in an environmentally sustainable and progressive way.

The Covid-19 pandemic has shown us just how interrelated our world is and how a Just Recovery must confront, not deepen, global inequalities that threaten the Global South. The pandemic will not be limited to a public health crisis. The experience of it will be heightened as, for example, countries in the Global South typically have poorly developed healthcare systems, often resulting from the imposition of structural adjustment programmes and high debt repayment burdens. They also have unequal access to global finance and their workers are exploited leaving them with fewer social protections.

We need to ensure that our Covid-19 recovery policies take account of this and are done in such a way that we forge a new internationalism, restructuring not just domestic, but also international relations of power. This will be critical in the fight for climate justice.

A Covid-19 stimulus package can support these proposals. In addition to direct state financing, local development banks and investment corporations – such as the Development Bank of Southern Africa (DBSA) and Industrial Development Corporation (IDC) – can play a greater, more strategic role by reconfiguring their mandates in order to ensure that a Just Recovery along the lines of the principles and projects articulated here is prioritised.

The deep inequalities in both wealth and income in South Africa contribute to the unequal patterns of ownership and power. More progressive income taxation and a wealth tax is also an important avenue of funding. The structure of our taxation system overall needs to be more progressive to help shift power relations in our society. Similarly, unequal power relations globally mean that we have to mount a campaign for sovereign debt relief for countries across the Global South.

No return to “business as usual”

South Africa is at a crossroads where the decisions that are made regarding how we attempt to recover from the Covid-19 pandemic will have implications for generations. If we allow market-based solutions and reducing the scope of the state, we will have to face the consequences of not having created resilient political, social and economic institutions. This will mean more inequality and the social ills that accompany it.

It means higher emissions contributing further to the global climate crisis and leading to more frequent and greater climate shocks. We will be less able to handle them and more people will suffer. A similar, if not worse, outcome will arise from doing nothing. We must not bail out Eskom and other SOEs without insisting on their transformation into public-serving, democratically-controlled institutions geared towards a renewable energy transition.

A different economy is possible

Covid-19 has shown us that the health crisis, inequality crisis and the climate crisis are all connected. They can only be properly addressed if we tackle our economic system as a whole. South Africa can follow a different model. This requires building democratic institutions and social services that allow for public affluence and human wellbeing alongside a just energy transition. A different economy is possible. A Just Recovery is an opportunity to lay the foundations for the long-term goals of overcoming inequality, centering community and restoring the planet.