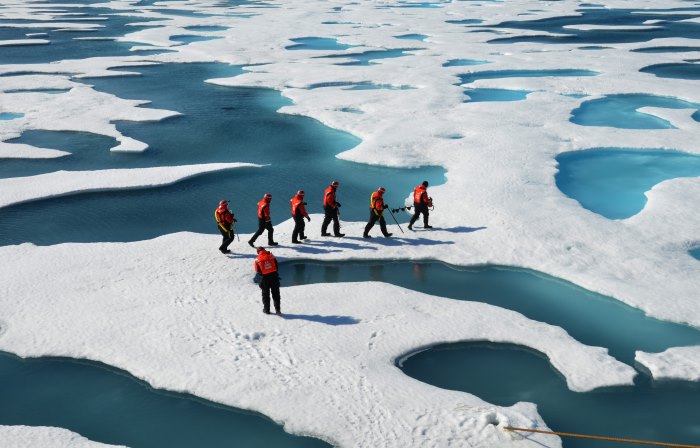 The effects of climate change on the Arctic — including melting ice and sea level rise — may possibly alter weather patterns in the northern hemisphere. These effects could include hotter, drier summers in some areas, wetter summers in other areas, and cold, stormy winters in others, according to studies compiled by the Greenpeace Research Laboratories in the report, “What happens in the Arctic doesn’t stay in the Arctic” which is published today.

“There seems no doubt that warming of the Arctic region is a major contributory factor to mid-latitude weather patterns. Although scientists are trying now to understand better the influence of the complex atmospheric processes of the poles, under a precautionary approach, it is extremely urgent to take action to combat climate change and to protect the Arctic.”

The Arctic ecosystem is warming more than twice as fast as any other region in the world, the total area of summer sea ice in the Arctic has decreased substantially over the last 30 years while sea ice volume has reduced even more substantially. This means that more heat is being exchanged between the Arctic ocean and the surrounding atmosphere and the reflective ability of the ice (surface albedo) is reduced. Furthermore, the release of harmful greenhouse gases from their long-term storage in the Arctic permafrost will further add to global climate change.

As the Arctic environment is integral to global climate systems, there have been notable alterations in storm tracks, the jet-stream, as well as northern oceanic circulations. Blocked atmospheric planetary waves are leading to ‘stuck’ weather patterns that cause more persistent weather at a given location. These changes appear to be influencing the weather across mid-latitudes, with profound effects on our daily lives.

As the sea ice recedes in the Arctic Ocean, fishing, maritime transport and hydrocarbon exploration will encroach further on the northern waters, including those beyond national controls, increasing the threats that this currently still relatively pristine region is already facing.

Despite these threats and likely increasing pressures in the future, this fragile and critically important ocean is still the least protected worldwide. Greenpeace advocates the establishment of an Arctic Sanctuary (a highly protected area prohibiting all extractive industries in the international waters around the North Pole). The designation of the “Arctic Ice High Seas Marine Protected Area” by the OSPAR Commission would be a step towards this goal and would provide some protection for the Arctic’s vulnerable species and habitats during a time of global change. It will also allow a precautionary and adaptive management of any future human activities across the region.

Voices for the Arctic

Along with the report, Greenpeace has produced a pack of Photoshopped artistic images that  illustrate the impacts of climate change around the world. Greenpeace is asking people around the word to send their reasons to save the Arctic using the site www.voicesforthearctic.org . Greenpeace, has already gathered almost 8 million signatures demanding Arctic protection and will deliver people’s statements for Arctic protection during a grand piano performance played by Ludovico Einaudi.