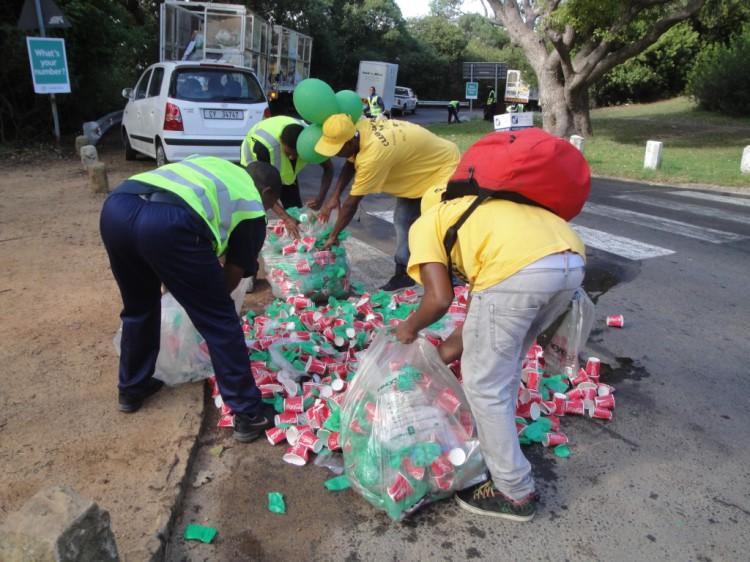 The Plastics SA team busy collecting the litter along the route at this year’s Two Oceans Marathon.

Marathons are no longer the wasteful events they used to be, as the recycling industry comes to the pavements and cleans up every scrap.

This year marked the 8th occasion that Plastics|SA was involved in cleaning the waste generated by runners and supporters alike at the Old Mutual Two Oceans Marathon.

According to John Kieser, Sustainability Manager at Plastics|SA, the aim of the association’s involvement in this annual race, is to ensure that the waste is collected, removed and recycled in line with the overall goals of the marathon’s environmental policy.

“Our involvement in this and other major sporting events held in Cape Town, such as the Pick n Pay Cape Argus Cycle Race, helps to raise awareness of the issue of littering and the fact that plastic waste, in particular, should be recycled as it is too valuable to waste,” Kieser says.

Brilliant team assistance right down to removal of cable ties

Plastics|SA employed a team of 120 workers from the Ocean View and Masipumelela communities for the duration of the race day. “By now we have developed a group of well-trained and experienced waste collectors who also helped us in previous years’ Two Oceans marathons and other high profile sporting events, making light work of what many would consider an impossible task,” he adds.

“The clean-up crews were divided into various teams, including a primary event sweep team, a main event team, a final sweep team and even a final, post-event cable tie team that had to remove all the cable ties left behind by the contractors on route,” Kieser explains.

Once everything was collected, the litter was sorted into four different materials, namely plastic (90 % of waste collected, primarily LD), glass 95 %), paper (10 %) and metal (5 %). As in previous years, Plastics|SA once again partnered with WastePlan for the recycling of the above mentioned waste.

Concludes Kieser: “Our participation provides a unique platform for the plastics industry to showcase its commitment to reaching our sustainability initiatives in a very practical and relevant way. We are committed to reaching our objective of sending zero plastics waste to landfill. By increasing total waste-to-recycling figures each year, we are helping to make sure the Two Oceans Marathon maintains its reputation for being ‘The world’s most beautiful marathon!’