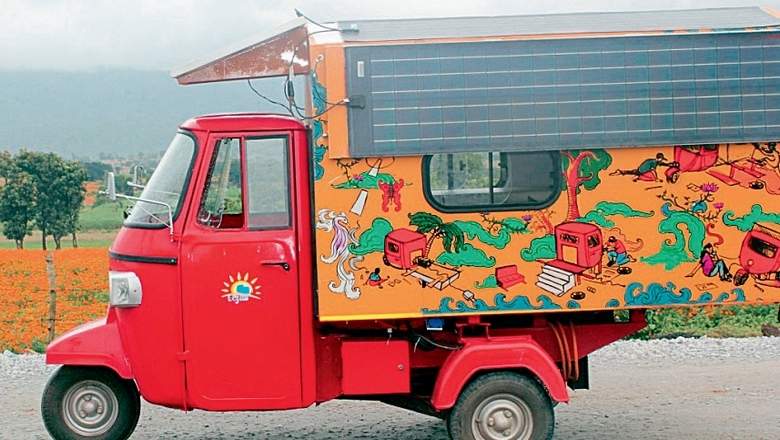 In an effort to spread awareness of alternative and clean energy sources, an adventurous young man is driving a solar and electric-powered Tuk Tuk (rickshaw) on an epic 10,000km road trip through 10 countries from India to the UK.

Project Tejas – a Sanskrit word for brilliance – is the brainchild of Indian engineer Naveen Rabelli, who, along with documentary filmmaker and back-up driver Raoul Kopacka, will travel through India, Iran, Turkey, Bulgaria, Serbia, Hungary, Austria, Germany, France and Great Britain.

Rabelli is no stranger to travelling for good causes, having recently concluded an 18-month, seven-country trip through New Zealand and Southeast Asia, teaching underprivileged children about sports, science, maths and sharing Indian culture with local residents.

On a brief stopover in Dubai before headed to the Iranian port of Bandar Abbas, Rabelli said he drew inspiration from the ubiquitous Tuk Tuks of his native country India.

“I was in India, and there are too many Tuk Tuks that are polluting, and not much was being done to them. That’s where the idea came from,” he told Khaleej Times.

“I started making my own Tuk Tuk three years ago, and after all the planning it took about that long to get to where I am now,” he added. Making of the Tuk Tuk The planning itself was a four-stage process. In the first stage, the team (which also included mechanics) examined current trends in solar power, planned the trip, and sourced required materials. In the second, motors and batteries were mounted and power cables were installed.

In the third stage, an on-board computer was installed and the solar powers were fitted onto the Tuk Tuk. Lastly, the vehicle was tested and data was analyzed with which to make improvements. According to Rabelli, the total cost of the trip – including the planned documentary, travel expenses, vehicle logistics, permits, visas and marketing efforts – is $38,790. Rabelli’s vehicle – a modified Piaggio Ape – can travel up to 100km per charge, and can be charged from existing electrical grids in addition to through its solar panels.

Beginning from Kochi, Rabelli and Kopacka have so far travelled through Bangalore, Pune and Mumbai.

“I was really struck that there are some places in India where there is absolutely no power. That really stood out to me,” he said.

“In our imagination everything runs on power, but these guys probably haven’t seen power for years now.” 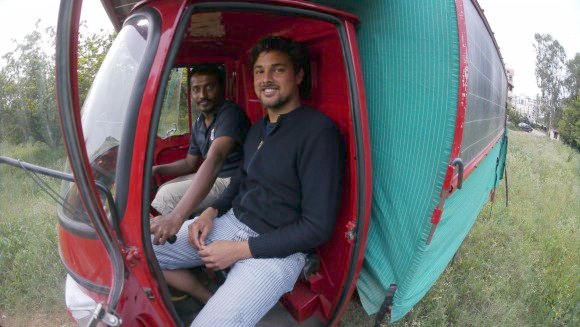 From Bandar Abbas, Rabelli will drive his Tuk Tuk to the Iranian cities of Shiraz, Isfahan and Teh-ran, before headed to the Iranian-Turkish border.

“I expect to cover the whole of Iran in about 40 days,” he said. The entire trip, Rabelli said, will take about four months, including numerous stops to discuss clean energy sources and meet with NGOs.

“It’s more about the journey for me, because I’ll be going to schools and colleges,” he said.

“I’m a very small guy, but I want people to start thinking about clean energy solutions,” he added.

“Especially with the younger generations, they have better scope to start thinking and get inspired by this project and see the possibilities of what we have.”