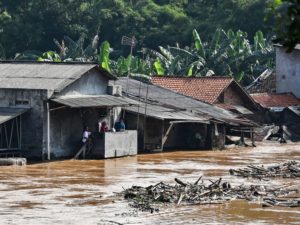 Jakarta is a victim of climate change, the fault of humans the world over (though mostly the fault of corporations), but it’s also a victim of its own policies. The city is sinking—a process known as land subsidence—because residents and industries have been draining aquifers, often illegally, to the point that the land is now collapsing.