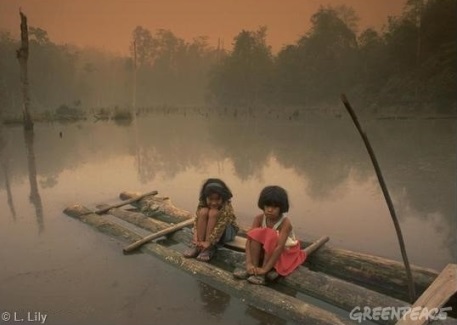 Peatlands are perhaps the world’s most critical carbon stores and are typically saturated with water, but become prone to fire when cleared and drained for industrial scale plantations for palm oil and pulp and paper.

Protecting Indonesia’s carbon rich peatlands is key to reducing the chance of fires responsible for the Haze Wave, but there is still no legal protection of all peatland and forests.

New mapping analysis from Greenpeace shows that fires are five times more likely to occur on peatland, while 75% of peat fires are located in Riau province alone, close to urban centres such as Singapore.

“How President Susilo Bambang Yudhoyono deals with this emerging global threat and public health emergency will define his green legacy. Industrial plantation companies are turning parts of Sumatra into a giant tinderbox. Will he take urgent action to strengthen laws that protect all forest and peatland before his term is up, or will he see his legacy go up in smoke?” asked Yuyun Indradi, forest campaigner at Greenpeace Southeast Asia.

Modelling from researchers in 2012 attributes an average of 110,000 deaths a year in the region to peat and forest fires, primarily associated with long-term seasonal exposure to smoke particles. This increases to nearly 300,000 deaths during an El Niño year. The fires are also responsible for destroying people’s livelihoods.

“Before when the forest was still intact, the soil could conserve water and protect the peat. Now the fires burn much deeper, and much faster. When the fire came, my three children and I tried to extinguish it [but] we lost everything,” said Laskar Harianja, a villager whose farm burnt down, in Greenpeace’s short documentary released today called ‘Forest Fire Families’.

Greenpeace’s analysis shows that fire hotspots in 2013 were 3.5 times more frequent on deforested peat as of 2011 than on peat that remained forested. The province of Riau, home to a significant portion of Indonesia’s plantation sector, accounts for just 5% of Indonesia’s land area, but 40% of all fires hotspots and nearly three-quarters of all fire hotspots on peat.

Even President Susilo Bambang Yudhoyono’s (SBY) moratorium on clearing primary forests and peatlands, where 30% of fire hotspots occurred, has not prevented the fires.

“SBY is keen to tout a “green” economic transition, and the moratorium was a step in the right direction, but little has been done since. We urge SBY to issue a strong regulation that protects all peatlands before his term is up, and help diffuse what is quickly becoming a carbon time bomb,” said Yuyun.

Companies including Colgate-Palmolive, Nestle, plantation companies GAR and APP, Wilmar International and more recently P&G have pledged to eliminate forest destruction from their supply chains following global pressure and campaigning from Greenpeace.  Greenpeace urges other companies like IOI, KLK, Musim Mas and APRIL/RGE Group to commit to No Deforestation.

Head over to Greenpeace for more links and info on this important issue.