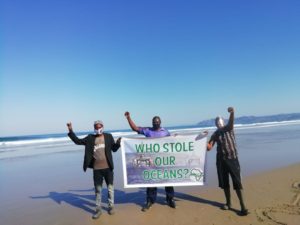 This World Ocean Day, fishing communities from around the country are calling on government to commit to legitimising the sector, as a matter of urgency, to protect the livelihoods of coastal communities who have been dependent on the ocean for generations.

While the recent lift in lockdown restrictions on fishers from the Department of Environment, Forestry and Fishing (DEFF) is a welcome change, the issues experienced by South Africa’s small-scale fishers during this period, exposed a number of serious threats to their way of life.

According to Liziwe McDaid from the Green Connection – a NGO working with coastal communities to further empower them to protect our oceans, as part of its new Ocean Protection Campaign Who Stole Our Oceans? – fisher communities in Langebaan in the Western Cape and in Port St. Johns and Port Alfred in the Eastern Cape all experienced a host of challenges during the lockdown. This included being harassed by the military and police services, even with government permission to fish.

McDaid says, “While our initial focus is on protecting the oceans and raising awareness amongst coastal communities, including rights of small-scale subsistence fishers, from abuses by the Oil and Gas industries, the situation under lockdown was too dire to ignore. In all our conversations with fisher communities around the country, one of the key issues that came up over and over again, was that government took away their independence – that is, their ability to fish, for food or for sale – to make them dependent on insufficient and inconsistent hand-outs.”

Ntsindiso Nongcavu of Coastal Links in Port St Johns says, “To me the ocean means to be free and independent. It feels good that I am able to fish to feed myself and my family. This way I have dignity. I do not have to beg from anyone to put food on the table. And, when we work together as a community, sharing our catches or harvests, then we have a variety of seafood to choose from and everyone eats well. And, if everyone takes responsibility, through fishing we can also improve our local economy.”

“I come from a fishing family,” says Nongcavu. “Our family has been able to thrive, through fishing. While the methods of fishing may have changed over the years, our ability to be independent and live and make a living from the ocean, has not changed. Growing up, I remember, we did not have to buy too many things except what we could not produce those ourselves. That is our way of life, we live by doing things for ourselves, we don’t want to be dependent on others, and we want to live the way we have been and protect this place. We have been reliant on the ocean for many years.”

Phindile Phikani, also from Coastal Links in Port St. Johns says, “The first challenge was being locked-up at home, prohibited from fishing – our livelihood – and being told to wait for government assistance, which never arrives. In the rural areas especially, we are out of reach from government. This lack of support from government has led to other challenges, such as not being able to register our cooperatives. This meant that we could not fish, and many families in our community had to suffer with hunger, because of this.”

In other places like game reserves, fishers are caught no matter the documentation they carry. They are told that they are not permitted to enter due to lockdown. In Port Alfred, the South African Police Services (SAPS) even confiscated some fishers fishing equipment. Even though we asked for support from DEFF, no assistance was received. This only increased our troubles, because people were apprehended while trying to (legally) provide for their families,” adds Phikani.

Solene Smit, a fisherwoman from Langebaan, Chair of the regional branch of Coastal Links says that since small-scale fishers do not belong to a sector, there are no policies in place to govern the sector, and was a key reason that the Covid-19 lockdown was unnecessarily difficult for many local fishermen around the country.

“Imagine the stress for our communities when, with government permission to fish, members of the military abused our people and refused to let them fish. While we did have a session with Minister Barbara Creecy, during this period, far too many of our issues remained unresolved. Not only did they not give us sufficient information, DEFF offered no support to assist with the imminent issues we face,” says Smit.

Smit adds, “Our community did receive a once-off delivery of food parcels handed out during lockdown, while neighbouring towns continued to receive food parcels. What I do not understand is why the government took away our ability to fish, and therefore at least feed our families. Why did they want to make us dependent on handouts?”

Hilda Adams (based in Langebaan) from the umbrella movement, the SA Small Scale Fishers Collective says that local fishing communities were terribly unprepared for the lockdown, and that bureaucratic red tape – which affects much of the lives of our communities – have created even more issues.

“We could fish during lockdown, if you had a permit. But, to get this, fishers needed to travel far and needed to arrange for accommodation, and these places were all closed and people ended up with no permits during this period.”