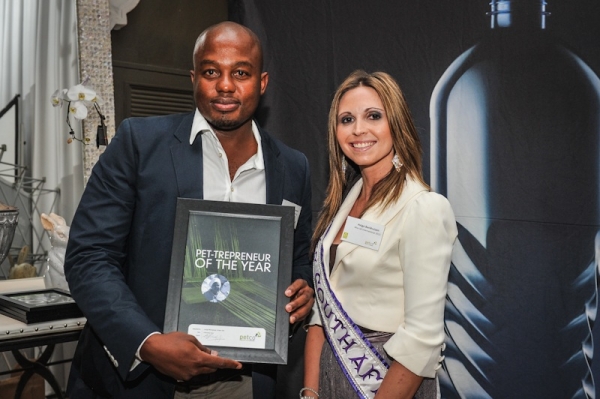 PETCO recently celebrated the best people, companies and organisations involved in post-consumer PET recycling in South Africa, at their 7th annual AGM and networking evening held at the Forum, in Bryanston, Johannesburg.

The magical evening, which was not shaken by the devastating hailstorm that gripped the reef, took the form of a stylish cocktail and networking session with formal program of entertainment and top notch speakers, and aimed to reflect on PETCO’s previous year’s achievements, showcase best practice and inspire the industry to innovate, contributing to a sustainable future for all.

Mbali Vilakazi, Soul Activist, Thinker and Poet, launched off the proceedings with a moving piece that artfully wove the story of recycling with a thread of “A chain reaction”, galvanising the audience to action, and reinforcing their important role in the chain. Mbali was followed by Cheri Scholtz, CEO of PETCO, who gave an overview of their activities for the year gone by showing that in 7 years of growing targets, collecting recycling levies, creating awareness amongst consumers and understanding end-use economics, PETCO is beginning to connect the dots!

Renown Political Analyst Daniel Silke enlightened the attendees with his socio-political commentary titled ‘South Africa in Perspective.’ Daniel shared fascinating global statistics, drawing Africa, and in particular South Africa, into this global perspective. He ended off imparting a sense of optimism about our future and the unique space in which South Africans find themselves, where opportunities to innovate abound in creating sustainable livelihoods, delivering basic services, balancing socio economic factors and meeting the needs of the present.

Having been inspired and motivated, the PETCO awards rolled out, with Miss SA International 2012 Helga Barkhuizen assisting in the certificate handover. The awards celebrated the best people, companies and organisations involved in post-consumer PET recycling in South Africa.

PETCO honoured cooperatives with the award of a certificate to Shirley Bahula-Ermias, President and founder of Tshwane YaMamelodi Secondary Cooperatives. This award is given to a cooperative that has proactively and effectively grown the volumes of PET recycled, creating employment opportunities, and promoting collection, maintaining quality environmental standards, adhering to fair labour practice and in general furthering the aims of PETCO.

Tshwane YaMamelodi Secondary Cooperatives, which was founded earlier this year as a spin-off of a Mandela Day initiative, services the whole of Mamelodi. Each co-op has a compliment of 35 members of staff in each of its 5 zones. At present, they are servicing a 250 000 homes without any municipal help and have created sustainable employment opportunities for at least 175 locals. 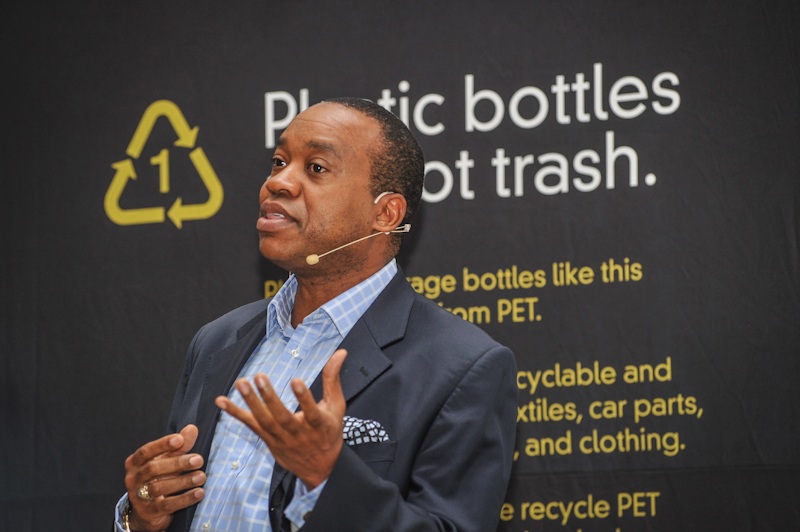 Cheri Scholtz, CEO of PETCO, aptly quoted the United Nations Secretary-General Ban Ki-moon saying that “Cooperatives are a reminder to the international community that it is possible to pursue both economic viability and social responsibility, and PETCO is proud to be able to showcase the efforts of our local community in taking charge of their wellbeing and creating sustainable livelihoods.”

“We will continue to empower cooperatives as part of our Category B project model where we support initiatives and activities that do not necessarily increase the collection volumes of recycled PET, but contribute to the visible recycling of PET,” she added.

2012 is the International Year of Cooperatives, which highlights the contribution of cooperatives to socio-economic development, particularly their impact on poverty reduction, employment generation and social integration. Under the theme ‘Cooperative Enterprises Build a Better World,’ the Year seeks to encourage the growth and establishment of cooperatives all over the world. Individuals, communities, non-governmental and government agencies are encouraged to recognise the role cooperatives can play in helping to achieve the Millennium Development Goals.

The line-up of award winners also included PET-trepreneur of the Year – Langa Mkhwanazi of Green Dot Recycling, who runs a collection company active in the Pretoria area. Langa is moving approximately 120-150 tonnes per month, achieving 142 tonnes last month despite the transport strike. Langa runs a 24 hour operation, working 3 shifts, he has 2 trucks, he employs 18 men and deals with over 1000 people daily.

The PET Recycling Innovator of the Year award, was awarded to Fanus Beytell of Anti-Waste. Fanus has developed a business model which is based on a combination of technology, market support and capacity building. The model involves the franchising of special cages for separation and storage of material in the different waste streams, a specially designed pickup truck with a patented loading mechanism to deliver empty cages on site and take the full cages back to the Materials Recovery Facility, working capital; signage; marketing support; safety clothing. PETCO recognises this as an ideal model for a co-operative to service an area on a highly labour intensive basis, and lauds Fanus’s efforts. 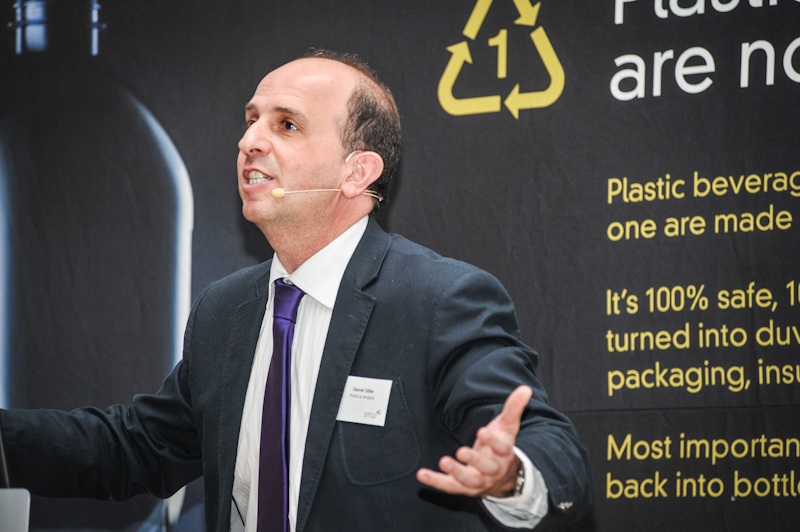 Plastics SA’s John Kieser and Douw Steyn were delighted joint recipients of the PET Recycling Educator of the Year award. Between them these two individuals are active members of the Global Plastic Action group, the e-Waste Association of South Africa (eWASA)  and the National Recycling Forum of SA.

They are founder members and initiators of the Marine and Coastal Educators Forum, the International Coastal Clean-up SA, Clean-up and Recycle SA and Global Recycling Day. They have initiated the Fantastic Plastic Schools competition that has involved 20 000 learners in plastic awareness and recycling over the past 6 years. They have coordinated numerous exhibitions and workshops about plastics recycling involving close on 80 000 people per year. They have both worked for Plastics SA for over 15 years and continue to motivate and empower people, young and old, across the country to take action.

As with all recycling efforts, there will only be a demand for material, if there is an end use market for recyclate.

This year’s PET Recycled Product of the Year was awarded to the locally-produced product that best reflects a commitment to using RPET, local production, quality and the promotion of rPET in product packaging and promotion.

Fibertex but emerged as winners with their extensive range of nonwoven geotextiles. They offer the Betatex range of nonwovens, made from rPET sourced locally, which is used for non-chemical applications in the building industry. Their product range also includes the Skudo Surface Protection range, which is a temporary covering that protects finished surfaces from construction site damages and spills. This is currently exported to the USA and is an interesting end use for the brown gingerbeer PET bottles.

“There is great market uptake for RPET in South Africa at present” noted Scholtz, “with other notable products in this category being the Woolworths bag – made from rPET fabric produced by Romatex; Kaytech’s Bidum, which contains rPET, was used for the lining of the Gautrain tunnel and is currently used in many engineering applications; Feltex nonwovens, which are locally produced using rPET fibre, is used for automotive applications; Brits nonwoven products, made from rPET fibre, used in many building and engineering applications; Isotherm and Think Green and other locally produced roof insulation, which is largely made from the green PET bottle rPET fibre; ExtruWood and the Extrupet pallet, which is made from the Jazz run; Belgotex carpets, which are slowly including more rPET fibre; the Woolworths juice bottle, produced by Polyoak, which contains 25 and 35% rPET content respectively; the Lomold pallett; and the Recycling Box and associated rPET products supplied by Lisa Khule which include slippers, geyser blankets.” 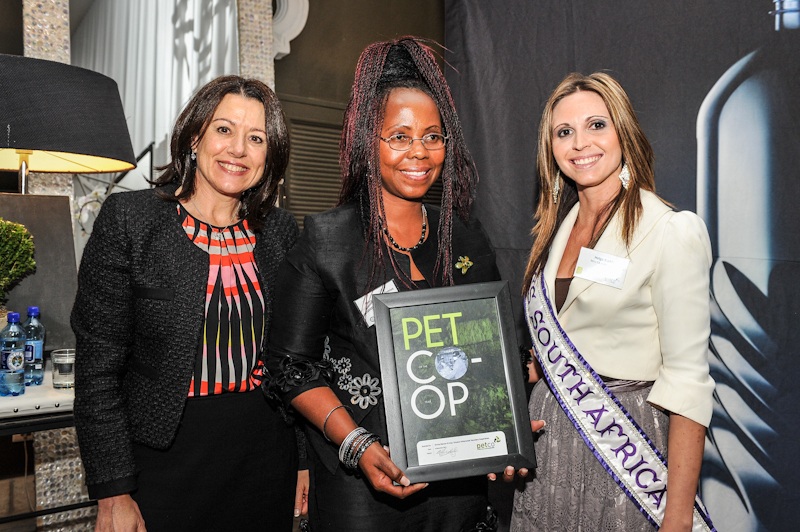 The awards ceremony drew to a close with the awarding of the Best end use PET market development of the year award. This honours a company that has developed a new end-use market for recycled post-consumer PET and has successfully commercialised this product in the marketplace. Extrupet walked away from the podium, award in hand for their Phoenix PET offering. Although initially produced in 2009, at the behest of Woolworths, this recycled polyethylene terephthalate resin was officially branded PhoenixPET on April 1st, 2012. The rise in green consumer consciousness and a need for local consumer brands and their retailers to display better sustainability credentials, justified Extrupet’s investment in creating the PhoenixPET brand.

Noteworthy achievements thus far include Polyoak being awarded gold, in the “percentage recycled content” category at SAPRO’s “Best Recycled Plastic Product Competition” 2011. This award being for the 1,5L juice bottles produced for Woolworths. Not only did Polyoak receive this award, but they also received the overall “Best Recycled Plastic Product” award, in the same competition. These juice bottles contain up to 25% PhoenixPET. Market response has been extremely positive, so much so that the demand for PhoenixPET exceeds supply. To this end Extrupet plans to upgrade its bottle-to-bottle (B2B) facility, in order to increase production capacity. PETCO will be watching this development with baited breath.

Sheryl Ozinsky finally closed the evening quoting Ivanka Trump who once said, “You have to think anyway, so why not think big?”

“South Africa is at a crossroads – we are a people with a certain past and an elusive future. In my opinion, the identity we seek will be discovered through entrepreneurial people for they are the prophets, going where others cannot” said Ozinsky, “….. And South Africa needs creative and entrepreneurial people, because the future will be made not by committees, cabinets and cliques, but by individuals such as those who have received awards here tonight. Non-conformists all, they are led by intuition and fed by imagination as they re-draw the maps and re-write the rules”.

PETCO is proud to be a part of this chain reaction.