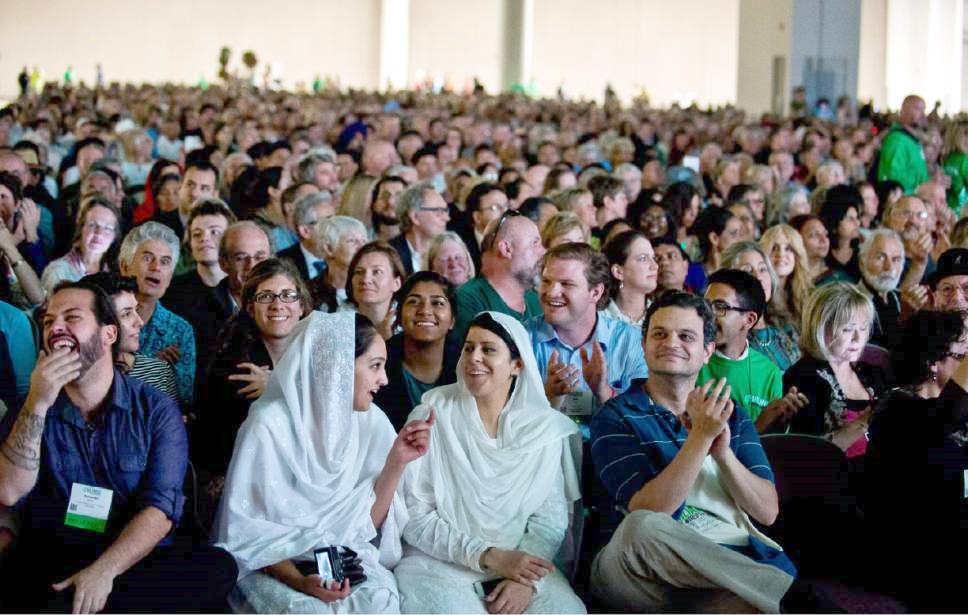 Nobody does pageantry like people of faith — and that was decidedly on display Thursday night as the 2015 Parliament of the World’s Religions opened with a lengthy processional at the Salt Palace in downtown Salt Lake City.

Chiefs from seven American Indian tribes, wearing traditional feathered headdresses and fur cloaks, led the way to the podium as a drum circle accompanied their steps.

They were followed by men and women dressed in the attire of their religions — all-white tunics, black tunics, black suits with white collars, maroon-and-mustard robes, saris, black-and-red robes, and holy headgear of every kind including kippahs, turbans and headscarves.

Thousands of participants watched – some snapping photos with cellphones – as the procession winded its way to the front of the interfaith lovefest.

From the stage, Ute and Piute tribal leaders welcomed the visitors from 50 religions and 80 countries.

Next came Imam Malik Mujahid, the conference chairman, who enthusiastically opened the sixth Parliament of the World’s Religions.

“This is our time — the world is coming closer in the global village,” Mujahid said. “Let’s bring hearts and minds together. That is the interfaith movement. Are you with me?” The crowd filling the exhibition hall roared back their affirmation.

Prayers for harmony and goodwill

Utah officials, including Gov. Gary Herbert, Mayors Ralph Becker and Ben McAdams, and LDS official L. Whitney Clayton — newly appointed president of the Quorum of the Seventy — joined speakers from several other faiths in offering their greetings and prayers for harmony and goodwill.

Utah’s The Rev. Patty Willis of South Valley Unitarian Universalist Church wrote lyrics about spirituality of the earth for a piece composed specifically for this gathering by Utah-based composer Mary Lou Prince. She performed the hymn and led the crowd in singing along.

Nearly 10,000 people are in Salt Lake City through Monday to dream out loud about a better world.

But the real fruit of the conference will be seen when they go home, organizers say.

“We’re not going to leave it in Salt Lake City,” said Larry Greenfield, vice chairman of the group. “We’re going to take it home.”

The five-day conference is being held in the United States for the first time since 1993. It began in 1893 in Chicago, resumed a century later and since has been held in such cities as Cape Town, South Africa, and Melbourne, Australia.

The idea of the conference is to bring together people of diverse religions to talk about what works and does not work in trying to solve problems such as war, hatred, climate change, wasteful consumption and income inequality.

Many of those attending are activists, and they hope to influence civic groups, governments, nonprofits and nongovernmental organizations.

“Religions have to be engaged in the world,” said Greenfield, who is an ordained minister with American Baptist Churches U.S.A.

Janaan Hashim, a defense attorney in Chicago and parliament board member, said the meeting has a ripple effect.

“Who are we to tell people in Turkey how to solve their problems? Or people in California?” Hashim asked. “But it’s very realistic to have those people come here, to wrap their heads around these ideas and take that back home with them.”