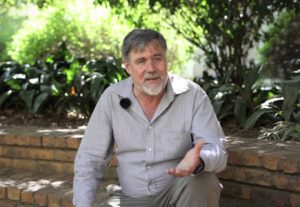 Biodiversity is not about a few endangered species, but rather about the building blocks of life sustaining all earth’s ecosystems. Over 600 scientists attending the 2nd major International Biodiversity Conference held in Cape Town recently said in their concluding statement that ‘the fabric out of which the earth system is woven is unravelling at an accelerating rate.’

‘We are losing species 100 times faster than new ones are being generated. And this biodiversity loss is accelerating fast. It will get much worse by the end of this century. We are entering the 6th massive extinction event in earth’s history.’

So said Dr Bob Scholes (pictured), leading ecologist at the CSIR, vice-chair of the International Biodiversity Research Co-ordination Group DIVERSITAS, and local organiser of the conference. Of dozens of presentations, here are a few that stood out for me.

What the environment’s services are worth

Research has revealed unbelievable dollar values for the ‘ecosystem services’ of biomes like forests and coral reefs – including food, pollution treatment, and climate regulation. The research provides insight into the worth of ecosystems in human economic terms, and should help societies make better-informed choices. For example, coral reef services worldwide have an annual value estimated of $172 billion. However, coral reefs are unlikely to survive if atmospheric CO2 levels continue to exceed 350 ppm.

Halving the destruction of tropical forests, meanwhile, would allow them to continue absorbing roughly 4.8 gigatonnes of carbon per year, slowing the rise of atmospheric carbon levels and forestalling anticipated climate change damage. Halving deforestation has a net present value estimated at $3.7 trillion according to research. Studies are showing that investment in protected areas holds exceptionally high returns. Investing $45 billion could secure nature-based services worth $4.5 – 5.2 trillion annually. For example, planting mangroves along a coastline in Vietnam cost $1.1 million but saved $7.3 million annually in dyke maintenance.

Conference scientists reported that marine ecosystems such as mangroves, salt marshes and seagrasses are among the most cost-effective carbon capture and storage systems on the planet. However, far from maintaining and enhancing these natural carbon sinks, humanity is degrading them at an accelerating rate. We are losing these crucial ecosystems much faster than rainforests – on current trends they may be lost within a couple of decades.

According to conference experts massive mismanagement and growing human needs for water are causing freshwater ecosystems to collapse, making freshwater species the most threatened on earth with extinction rates 4 – 6 times higher than their terrestrial and marine cousins. While freshwater ecosystems cover only 0.8% of the earth’s surface, they contain roughly 10% of all animals. There is growing scientific evidence that we are on the verge of a major freshwater biodiversity crisis, but few are aware of the catastrophic decline at both local and global scale. The problem puts billions of people at risk as biodiversity loss affects water purification, disease regulation, subsistence agriculture and fishing. Freshwater ecosystems and their species also absorb and bury a significant volume of the planet’s carbon.

Conference scientists declared that ongoing biodiversity losses make zero social, environmental and economic sense – but that these losses won’t stop without transformative and committed action. Copenhagen and the International Year of Biodiversity (2010) are therefore crucial opportunities. The conference was dedicated to practical solutions, such as the formation of a new global biodiversity monitoring system; developing the interface with policymakers; and assessing economic incentives to prevent habitat destruction.

But on a local level there is a lot we can do too; small adjustments in farming practices such as leaving corridors of biodiversity and stepping back from excessive use of fertilisers and pesticides can have massive positive impact on biodiversity.