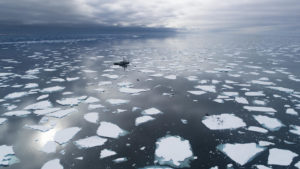 Scientists on an ice floe during an expedition at the ice edge to take sea ice core samples, measure snow and ice thickness, and water column properties below the ice at the Arctic ice edge in Fram Strait, between Svalbard and Greenland.

The launch of the Intergovernmental Panel on Climate Change (IPCC) special report on the Ocean and Cryosphere today, highlights the need for governments to urgently scale up and accelerate efforts to address the climate emergency and protect the world’s oceans.

Drawn from almost 7,000 papers by over 100 leading climate scientists, the IPCC report represents the most comprehensive assessment to date of the severity of climate impacts on our oceans and the cryosphere (frozen areas of the Earth).

“The South African government can no longer ignore the climate crisis. There is no debate and the science is crystal clear: our reliance on coal means that our air is toxic, greenhouse gases are out of control, and we are killing our oceans. We need acts of unprecedented political courage from our leaders to prevent the most severe consequences for our planet by staying below 1.5℃.

“Strongly advocating for a strong Global Ocean Treaty – capable of protecting at least 30% of the world’s oceans – is an essential step for the South African government to take to begin building the resilience of our oceans. Climate action and protecting our oceans go hand in hand, and both of these are critical for our very survival.” 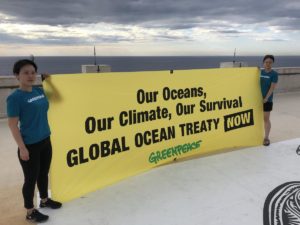 The IPCC report points to some potentially irreversible changes and growing threats to the Earth’s oceans and shrinking cryosphere. It comes as Arctic sea ice levels reached their second lowest level on satellite record – some 2.1 million Km2 below the average long term minimum area.

The IPCC also presents policy solutions to help governments mitigate the worst impacts of global warming and build climate resilience. It points to the challenges of oceans and cryosphere governance systems, which remain fragmented across administrative boundaries and sectors and fail to provide effective ocean protection.

“World leaders at the UNSG Climate Action Summit this week pretended to care, but unless words translate into more ambitious commitments to address the climate emergency and forge a strong Global Ocean Treaty, they are failing the millions of climate strikers around the world who came out onto the streets demanding radical change.

“The IPCC report is another wake-up call for those governments who continue to sleepwalk through the climate crisis. The decisions that world leaders choose to make in the next few years will have profound consequences for the future of humanity in the coming centuries.” 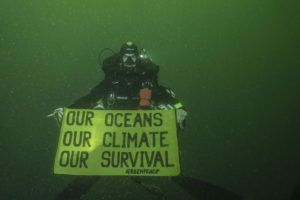 In other findings, the IPCC report found:

That sea-level rise by 2100 could be close to one metre if global warming exceeds 3°C, which is where the current global government policies are heading to. This could result in the displacement of millions of people from coastal areas.

As sea surface temperatures increase and as oceans become more acidic, marine life and ocean ecosystems will suffer major challenges. Even if global warming is limited to the agreed target of 1.5°C, it is projected that up to 90% of warm water coral reefs will be lost.

Widespread permafrost thaw is projected for this century. Arctic and Sub-Arctic Permafrost contains 1460-1600 Gigatons of organic carbon, equivalent to almost twice the carbon currently in the atmosphere.

By the end of this century, the frequency of marine heatwaves could increase 50-fold (under temperature increases of 3-5℃) compared with the end of the 19th century.