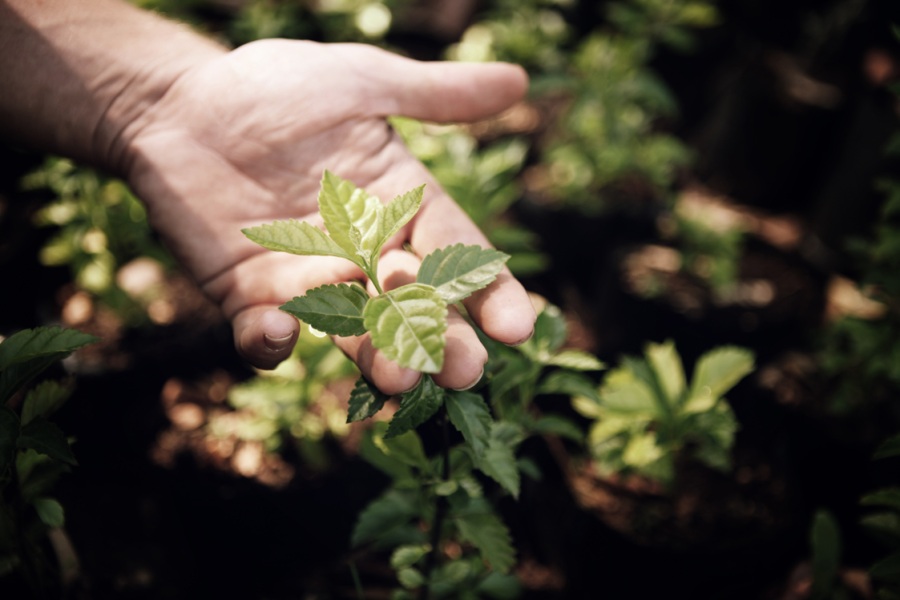 How on earth do you farm intensively without producing carbon dioxide?

A colleague tells me about Backsberg’s carbon neutrality (since 2006) and I hear something about it on the radio. A whole new concept for me. I’m making an appointment with Mr Michael Back. His first question to me: “How serious are you about organic farming?” It catches me off guard and I mumble something about how “sustainability is important to me”. Under the alien oak trees around a table with delicious coffee, juice and snacks, he chats with about 10 of us, very informally.

Michael is the third generation Back on Backsberg and is primarily a wine farmer, but also farms with specialty fruits on a smaller scale. About 5-6 years ago he read a lot about climate change and started thinking about the condition of his farm and what he could leave to his son. A farm owner “owns” his land for only a very short time.

Every time vineyards are planted, forests and trees are cut down. At first he thought he was doing the right thing when he cut down giant pine trees – after all, they are alien. Now, however, he regrets it, because trees are and remain a renewable energy source. Hence the beautiful oak trees under which we could hang out. Currently, 10% of the farm has been set aside for the conservation of fynbos for the farm’s biodiversity initiative.

But its alien trees remain – as long as a tree grows, it will consume carbon dioxide and can be used. He believes everything is about balance, also between indigenous and alien. Of course, he makes sure that his trees do not spread to neighboring land. “Something is only a problem when it is not utilized”. (He wishes he could GROW water hyacinths in Klapmuts’ fallow works for renewable energy and thus find a good use for a plant that is currently considered a problem.) 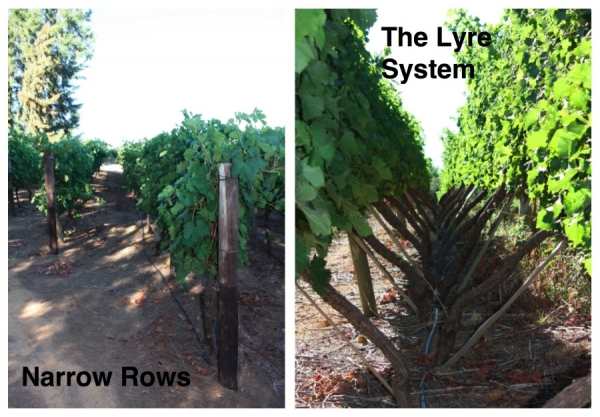 The principle he followed was “How little can we do?” He conducted an internal audit on the farm and asked questions such as the following:

How many cubic meters of cement, wood, stainless steel, manufactured steel (vehicles) etc. is used on the farm?

Does his plains farm justify an expensive 4 × 4 vehicle or is it just to soothe his ego? He currently drives a Bantam bakkie himself and his drivers can choose between a Bantam and a Corsa.

Are large tractors justified? He then gradually replaced his large tractors with small tractors and only changed the weight distribution on the three point so that the smaller tractors could still do the same job. Immediately, the capital outlay on vehicles, the fuel consumption, the carbon dioxide production, as well as the impact of the tractors on the ground dropped drastically.

Why are the pergola poles planted 6m apart in the vineyard? He inherited it that way and his vineyard manager also did not really know why. He then gets a structural engineer to do some sums and they calculate that poles 7m apart will still be strong enough to support the vineyard. All new artefacts are now being built this way and the savings on wood as well as its transport costs are definitely significant. 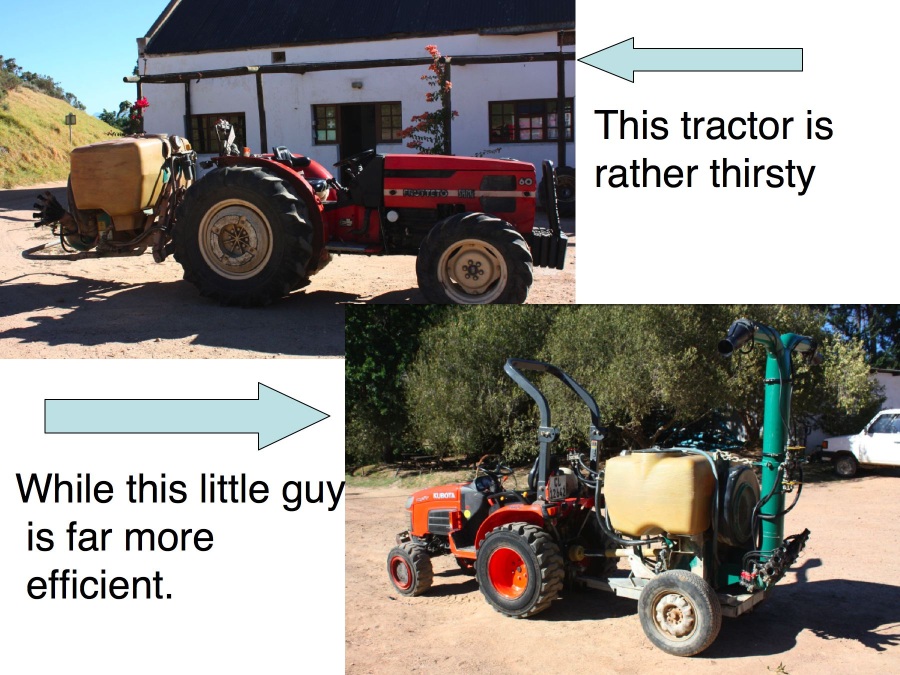 Michael previously owned several blocks of vineyards that he operated organically, so he reckons it’s easy for him to make comparisons between the two. He reckons that there are many factors surrounding organic farming that have not been researched enough yet. For example, he had to inject organic substances up to three times in the organic blocks while the same problem was only treated once with conventional chemical products in the conventional blocks. So the impact of the tractors, the use of fuel, the money in time as well as the production of carbon dioxide was three times more in the organic blocks and the question now arises: which one is really more sustainable? He is extremely pragmatic when it comes to new things: if it works, he will do it, if it does not work, he seeks an alternative.

According to the carbon audit he commissioned from his farm, his biggest current expense was energy (fuel and electricity) and not chemicals. With increasing pressure from the market to seek lower carbon footprints in farming, it was easy to make the adjustments. All the adjustments initially cost money, but he assured us over and over that it was economically justifiable.

He reckons that there are no “holy cows” in farming. EVERYTHING is negotiable and only the best methods should be implemented, not the historically acceptable ones.

One of the fundamental principles he applies is to approach the perspective of production at vineyards differently. He reckons that tons per hectare give a skewed picture of production and that the amount of fruit per square meter of canopy gives much more information about the production capacity of the plant. 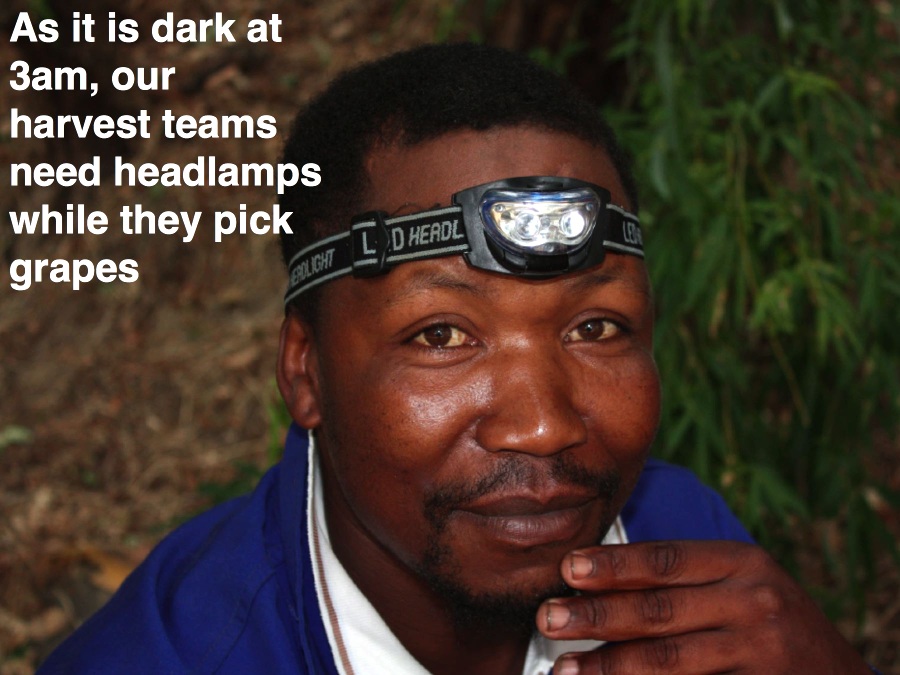 Its vineyards are 3.6m apart, much wider than the “acceptable” distance, but it is laid out in such a way that it leans towards each other. In this way he increased the drag per stick, but reduced the distance to be driven, the people needed for the work as well as the carbon dioxide production. His red wine is cooled with dam water using gravity after hearing that all water in the Western Cape remains 3-4m below the surface constant between 14 and 15 oC.

The inlet pipe of the water used in the cooling tower is now 4 meters below the surface of the dam water and this cool water flows with gravity to its basement, where it cools the tanks. The water is returned to the dam by solar pumps. The fact that he starts harvesting at 3am at night also reduces the energy consumption for cooling – but now his pickers have to wear headlights!

He reckons he has invented nothing that is not already being done by someone else. He only does his best to use less and use things over and over. After that, everything possible is recycled.

He farms only on 80% of his land, because in addition to the 10% reserved for biodiversity, 10% of his farm is also used for the cultivation of renewable energy. He planted a multitude of bamboo plants outside the farm and other marginal lands. Along with sawdust and waste from a nearby sawmill and wood from his own alien plants on the farm, he wants to generate his own electricity while making bio-char. The gas (syn-gas) produced by this process as a by-product can therefore serve as fuel for its generators. The charcoal is then used as a soil supplement which also improves the carbon sequestration. 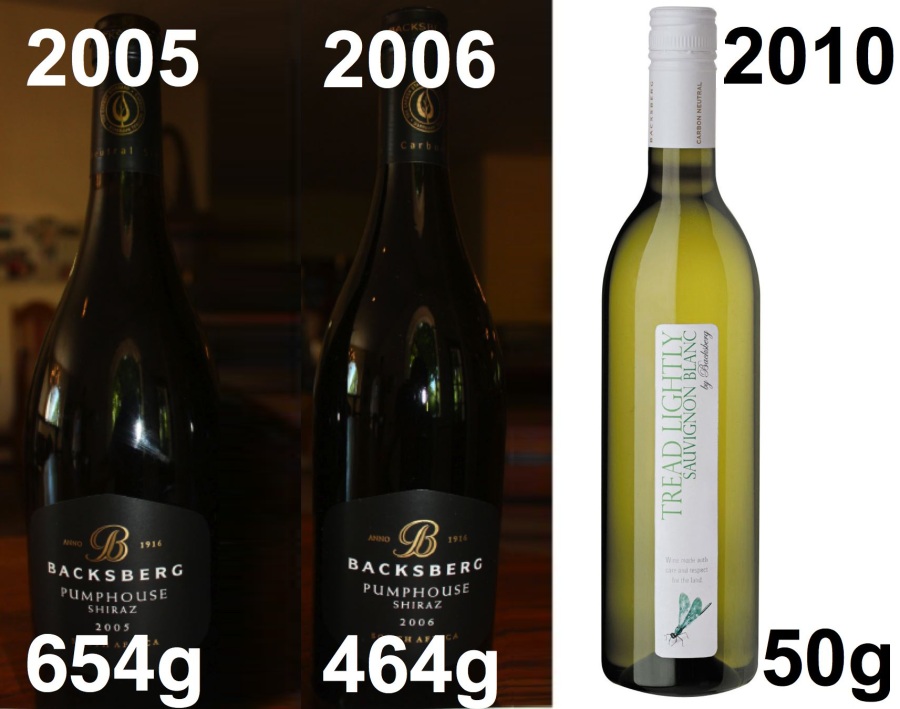 Since 2010, Backsberg has been the first wine farm to market certified wine in a soft polyethylene terephthalate (PET) bottle. The bottles use 50% less energy and produce 55% less greenhouse gases during manufacture than a similar glass bottle and are 100% recyclable. At the same time, it has only 0.125% of the mass, which makes the transportation of the wine significantly cheaper.
How now?

The question now arises: what if someone also wants to operate his farm carbon neutral? A good start is to do an internal audit yourself: what is the minimum that the farm can meet and still make a profit? What “softer” alternatives are available locally? So chase away the sacred cows of “this is how it has always been done” immediately from the farm!

After that, the experts must be called in for the carbon audit – fortunately they are already available locally and can be contacted via the internet. One such website is this one which mainly concentrates on the wine and fruit industry.

As a last thought, Michael assured us that all his “inventions” had been invented by others. His ears are open and he likes to plow with other people’s calves. So do not hesitate to approach experts, even if it costs money. Mistakes can be very costly.