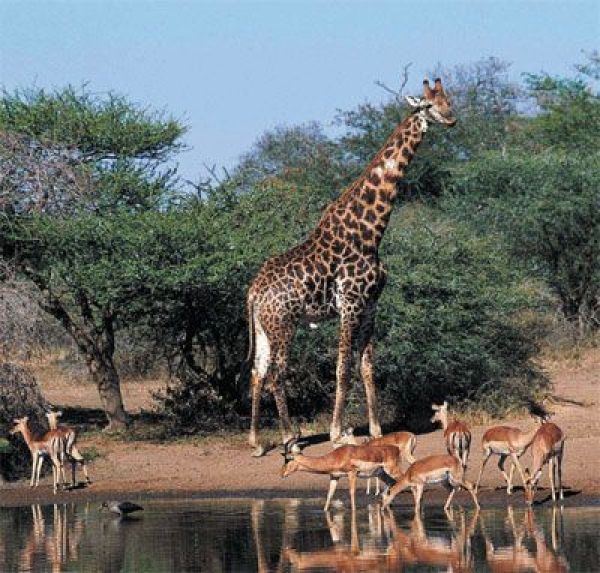 Plans to build a new development and two world-class hotels inside the Kruger National Park is now threatening one of South Africa’s most pristine locations. A pressure group called AIKONA (Against Interference in Kruger & other National Assets) was created by some members of the public and a concerned conservationist who are up in arms.

It is widely speculated that SANParks is to establish an upmarket hotel at Malelane in the Kruger National Park. It is said that guests will have 24 hour access to the Park, with an hourly shuttle service. This planned 220 bed hotel is to be built at the confluence of the Timfenhene Creek and the Crocodile River. It is aimed to provide more space for people visiting the Park, according to William Manasa HOD of Public Relations and Communications. Yet AIKONA sees it as commercialization and exploitation of the sacred National Park.

The Malelane Safari Resort (MSR) is planned to be built in a Wilderness Area as per a map compiled by W. van Riet, dated 1985. The area is still zoned as primitive, with a high biodiversity sensitivity rating as per the KNP Zoning Plan of 2006.

According to an inside source, the parking area for these vehicles will be inside the KNP across the Crocodile River, in full view of the guests on the deck of the Pestano Lodge.

Guests at the hotel will have all the facilities normally offered at a 4/5 star establishment and will be taken on game drives in open safari vehicles.

The cost is said to be R1500.00 pppn bed and breakfast. If you add on the other costs of meals, teas and drives these costs are comparable to that charged by the concessions in the Park. Ample accommodation is available in these lodges as their average occupation rate is 40%.

“The AIKONA group currently is a few members short of 300 and is against the commercialization and exploitation of our National Parks, which belong to the South African population – not to SANParks,” Allan Eccles, an official representative of AIKONA said.

“SANParks are the appointed custodians of our heritage. It seems to me that conservation no longer appears to be a priority of the Board of SANParks. Moneymaking, tourism and profits seem to be occupying the front seat,” said Eccles.

“I am in possession of a document of SANParks which indicates that they are now planning a Peripheral Development Zone (PDZ) which runs within the borders two kilometres wide. This will be set aside for development and specifically makes mention of accommodation of up to 250 beds to be allowed for. This document was drawn up during September 2011 – again in secrecy with no public participation whatsoever,” he added.

Should this development zone be approved it will open the door to the other hotels in the KNP, which except for the one at Skukuza are being denied.  The rumour is that six hotels are planned: The Malelane Safari Resort, Skukuza, The Orpen area, the Phalaborwa area, and numbers 5 and 6 further north. But HOD of SANParks Communications, William Mabasa denies this.

“This is not true. We are only planning two hotels. We cannot say by when the hotels will be built. Currently there are 22 hotels on the property, which stretches over 2 million hectares. We need to provide more space for people and tourists visiting the Park. The environmental impact studies for the first hotel has commenced. I don’t know when it will be completed, as it’s an independent process and depends on many factors,” said Mabasa.

Eccles believes that the PDZ plan is in direct conflict with the recent published Government Gazette, which makes mention of buffer zones. This is an area of a few kilometres wide where development is restricted around our National Parks.

“How can SANParks now even consider PDZs?” he asked.

Recent surveys done for SANParks by the Tourism and Leisure School of the North-West University indicated that 89% of the respondents indicated that the KNP should remain is it is, with no commercialization. They said they visit the National Parks for a nature experience.

Anti commercialisation and exploitation of nature

AIKONA says they will continue being supporters of the National Parks, but will also object to the commercialization and exploitation of the nature assets. If nothing is done to stop these ventures the KNP will turn into ‘just another holiday resort’.

“The Kruger is currently a Category 2 IUCN National Park (International Union for Conservation of Nature). If the hotels go ahead it could lose this international status, which will affect tourism to South Africa,” Eccles said.

Amongst AIKONA’s disquiets is SANParks failure to respond to their requests to open these plans for the proposed hotels to an open public debate.

“Dr David Mabunda, CEO of South Africa National Parks explains that the new vision of SANParks is “to connect to society.”This is based on the RSA Constitution, which he quotes as follows: ‘Everyone has a right to have the environment protected, for the benefit of present and future generations, through reasonable legislative and other measures that promote conservation; and secure ecologically sustainable development and use of natural resources, while promoting justifiable economic and social development’.

“It doesn’t say anywhere in the Constitution that there shall be no development done in national parks or that there are certain groups or individuals who are not allowed to benefit from the existence of protected areas including national parks. I believe that Dr Mabunda has misinterpreted and misrepresented the essence of the clauses quoted from the Constitution and that they are, therefore, unfounded and misleading,” says Dr Salomon Joubert says, a former head warden of the Kruger National Park.

Joubert says the Constitution rather endorses the wise counsel of old Chief Seattle when he cautioned that ‘we have not inherited this land from our fathers, we are merely borrowing it from our children’ and that it refers to our environment and the necessity to conserve it with the aim of retaining its vigour and viability while utilizing its renewable resources.

“Dr Mabunda quotes the Minister of Environmental Affairs as stating that our national parks are ‘hubs of economic development in our society’. If the inference is that national parks are intended to be hubs of economic development the legality of the statement needs to be seriously challenged. An earlier (1969) definition of a national park by the International Union for the Conservation of Nature (IUCN) and the current guidelines for Category II National Parks essentially make provision for areas set aside to preserve natural ecosystems in their most pristine state possible and where visitors are allowed to appreciate nature. The definitions, old and new, do not exclude tourism; neither do they dismiss the economic value of tourism. Both can be accommodated in national parks, but subject to the core value of preserving biodiversity (which includes wilderness) in its most pristine state possible,” he stated.

He says that hotels and extravagant facilities were shunned from the beginning, instead accommodation facilities – with basic essentials only – were provided to afford tourists the opportunity to visit the park. “This later developed into the philosophy that facilities should never be used as attractions to national parks and that the primary objective would remain the experience of nature in her most unspoilt state possible.”

“Dr Mabunda has tried to assure South Africans that SANParks will not over-develop the national parks. However, the proposed developments fly in the face of these reassurances. SANParks owes it to the people of South Africa to preserve the intrinsic values of our national parks in their unblemished state for the benefit of this and future generations.”