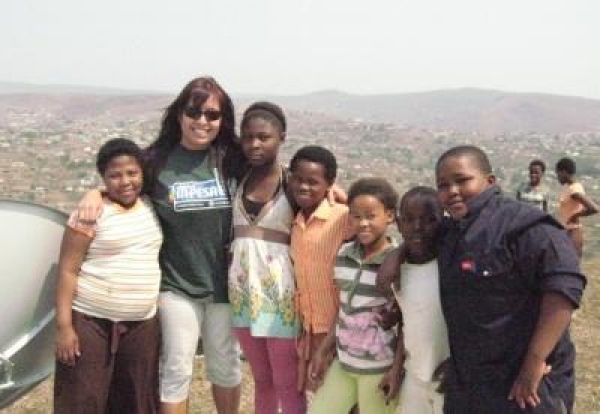 The GPS diligently led me through shacks and narrow tar-less streets to an incorrect location. Temperatures already climbed into the thirties at 8am in the morning. I back tracked a bit and passed a young girl with her books under her arm and a bright blue t-shirt on.

I asked for directions and she promptly pointed me in the right direction – Izwilesizwe Primary School, Imbali, Pietermaritzburg – in flawless English. Not too far off I spotted the school on the hill. I had imagined it smaller, but it was easily visible and had the typical look of our red-bricked schools. A huge cellphone tower marked the spot and I just followed the tip above the buildings.

Winding up the hill past basic shelters and dodging chickens and a few goats, I arrived at the very well kept school. The main gate slowly opened and the guard in the box waved me in. I was one of the first to arrive. Lunga from the Wessa eco-schools projects had already arrived and beckoned me into the front entrance of the school. I passed a few curious school pupils and entered into a cool building. In the staffroom we found teachers and other volunteers from different walks of life, enjoying tea and coffee, juice and sandwiches. We were excited to be involved together.

This project was encouraged by Nedbank for staff to get involved in together with WESSA (Wildlife and Environment Society of South Africa). The intention was to supply the school with a sustainable self sufficient infrastructure with regards to food security and educate the children involved in maintaining it.

Nutrition is key to good education

As most of these children only have limited access to nutritious food, the school takes the responsibility in the community to feed the kids during the day. There was a choice of two primary school destinations, one in Pinetown and the other in Pietermaritzburg. I chose this school  because I had visited a dynamic lady from the Ethekwini municipality a few weeks prior. When Ronel Mitchell heard what we were involved in, she immediately organised a math and science gift box for the school to assist in the lack of sufficient resources from their own Pietermaritzburg municipality.

Lunga introduced me and Thobile claimed me for her sun cooker team. Yes, I wanted to get involved with that specifically because I had been exposed to veggie tunnels and gardening before. I love gadgets and couldn’t wait to get my hands on one. We assembled on the grounds outside the main building and were separated into our different groups. Pupils were allocated to us in teams and the games began. Learners carried 10 boxes out of a storage room onto the dry sandy ground.
Nifty kids with can-do attitude

The directions in the box were basic and easy to follow, at times. No pressure, as I tried to assemble the weird contraption for the first time in my life. The kids were helpful and duly passed the nuts and bolts. It was like building a Lego design. We had hardly finished when the pupils started taking boxes and their different teams got busy.

My team of five kids, three girls and two boys, had an older girl, who was technically savvy and took charge. The learners were so excited and after a while our cooker was completed. With a shout of success they claimed to be the winners and promptly took the next box to assemble.

In great spirit the kids got involved in making a difference. These cookers were donated to their school to provide them with food in an eco friendly, energy saving way. They saw it as a challenge to be able to assemble it themselves and be successful at what they were attempting to do. Getting educated on how to do it expanded their knowledge base for their future.

Then I hauled out the gift box from Ethekwini Municipality. The great excitement from learners and teachers alike showed me the passion that drives this humble school. I was proudly shown the array of awards and trophies they had won as a school. I think that our country will succeed if individuals like these from different aspects of our country assist each other in moving forward, not expecting anything in return.

The onus is also on corporate companies to get involved and help where it is needed, because they have the means to. They need to be the change that is needed in the world and more realistically for us, our country.

Nedbank created the awareness and made it a part of their culture to involve staff and promote community volunteering annually to make a difference. I would urge any-size company to do the same so that staff has the opportunity to be involved with community programs. In this way people are reached and exposed to what is happening around them.

As an energy-conscious country it is critical to assist our communities towards natural energy resources so they can prosper in a brighter future. 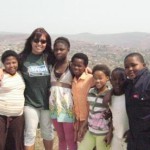 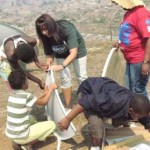 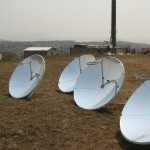 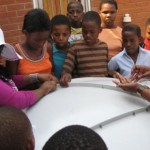