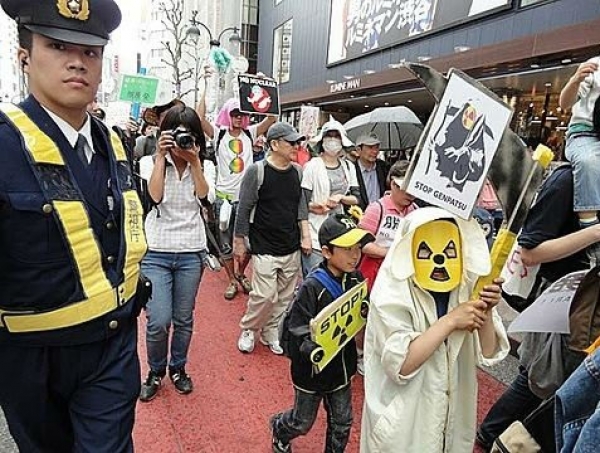 Responding to public protests, such as this 2011 demonstration in Tokyo, the Japanese government has announced plans to phase out the nation’s nuclear power plants by 2030.

Greenpeace Africa commends the announcement by the Japanese government that they are committing to phase out nuclear energy by 2030 and increase renewable energy by 30% in the electricity mix.

Japan now joins countries such as Germany and Switzerland in turning away from nuclear power. Greenpeace Africa urges the South African government to demonstrate similar leadership and to move away from its nuclear plans towards renewable energy, according to Ferrial Adam, Greenpeace Africa climate and energy campaigner.

“It is about time, that our government stops to irresponsibly waste its efforts on outdated and risky technologies, while keeping the emerging innovative industry sector of Renewable Energy in a cage, at huge economic costs to all South Africans” added Adam.

Japan was the third-biggest user of atomic energy before the Fukushima Daiichi disaster and had planned to rely on nuclear power for 50% of its power needs by 2030. But since the Fukushima disaster, 48 of 50 reactors in Japan have been taken offline, and public opposition to nuclear power has continued to grow.

“It is not too late for South Africa to take decisive action and stop its nuclear plans,” continued Adam. “The debate and discussion around nuclear expansion must be opened to all citizens of our country and not done behind closed doors and in secret as is currently the case.” Greenpeace Africa’s Advanced Energy [R]evolution provides a road map for South Africa to have a just transition away from fossil fuels towards renewable energy and shows that almost half of the country’s electricity can be produced from renewable sources by 2030, increasing to 94% by 2050.

“A nuclear-free future is not a choice, it’s an inevitability. Japan’s step to eliminate nuclear energy sends a message to other countries that it is time to end the use of this dangerous technology once and for all,” Adam added.