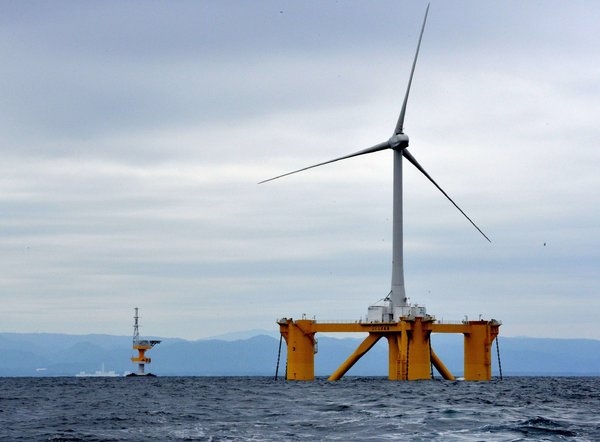 Twelve miles out to sea from the severely damaged and leaking nuclear reactors at Fukushima, a giant floating wind turbine signals the start of Japan’s most ambitious bet yet on clean energy.

When this 350-foot-tall windmill is switched on next month, it will generate enough electricity to power 1,700 homes. Unremarkable, perhaps, but consider the goal of this offshore project: to generate over 1 gigawatt of electricity from 140 wind turbines by 2020. That is equivalent to the power generated by a nuclear reactor.

The project’s backers say that offshore windmills could be a breakthrough for this energy-poor nation. They would enable Japan to use a resource it possesses in abundance: its coastline, which is longer than that of the United States. With an exclusive economic zone — an area up to 200 miles from its shores where Japan has first dibs on any resources — that ranks it among the world’s top 10 largest maritime countries, Japan has millions of square miles to position windmills.

The project is also a bid to seize the initiative in an industry expected to double over the next five years to a global capacity of 536 gigawatts, according to the industry trade group Global Wind Energy Council. The Japanese have lagged at wind turbine manufacturing, which is dominated by European and Chinese makers.

The Japanese government is paying the 22 billion yen, or $226 million, cost of building the first three wind turbines off Fukushima, part of Prime Minister Shinzo Abe’s push to make renewable energy a pillar of his economic growth program. After that, a consortium of 11 companies, including Hitachi, Mitsubishi Heavy Industries, Shimizu and Marubeni, plan to commercialize the project.

“It’s Japan’s biggest hope,” said Hideo Imamura, a spokesman for Shimizu, during a recent trip to the turbine ahead of its test run. “It’s an all-Japan effort, almost 100 percent Japan-made.”

What sets the project apart from other offshore wind farms around the world, consortium officials say, is that its turbines, and even the substation and electrical transformer equipment, float on giant platforms anchored to the seabed. That technology greatly expands potential locations for offshore wind farms, which have been fixed into the seabed, limiting their location to shallow waters.

For this reason, there have been few great sites for offshore wind farming in Japan, which lies on a continental shelf that quickly gives way to depths that make it unfeasible to build structures into the seabed. But floating wind farms could change the picture in a big way.

Harnessing wind in deeper waters off Japan could generate as much as 1,570 gigawatts of electricity, roughly eight times the current capacity of all of Japan’s power companies combined, according to computer simulations based on historical weather data by researchers at Tokyo University, one of the project’s main participants.

Potential for 7.5 terawatts of electricity

If you get the scientists dreaming big, they say the world’s wind power potential — the maximum power that can be extracted by a given number of wind turbines over increasingly larger areas — could yield up to 7.5 terawatts of electricity. According to a study by researchers at the University of Delaware and Stanford University concluded last year, that is more than enough to fuel half the world’s power demand in 2030. A gigawatt is equal to 1 billion watts, and a terawatt is 1 trillion watts.

“We’re opening a new page in the history of offshore wind power,” said Takeshi Ishihara, a civil engineering expert at Tokyo University and the leader of the project.

Paul J. Scalise, a research fellow at the Institute of Social Science, also at the University of Tokyo, said it was far too early to place such big hopes on offshore wind power. Mr. Ishihara’s forecasts, he said, needed to be adjusted for load factors, disruptions to sea lanes and fishing zones, as well as possible “not in my backyard” protests by fishermen and other local residents.

With those restrictions, he estimates Japan’s offshore wind generation potential far lower, from a third to three-fifths of Japan’s current electric power supply.

“We shouldn’t forget the obvious reality check. The farther from the coast they place these floating wind farms, the more expensive it becomes to build them and transmit the power back to Japan,” he said. “It becomes a cost-plus benefit analysis in which you weigh the benefits of the electricity versus the cost to build and maintain the infrastructure.”

Japan has been forced to look more seriously at renewable power after its multiple nuclear meltdowns at Fukushima in 2011. All Japan’s 50 reactors are currently down, awaiting inspections aimed at reducing local fears over nuclear energy and depriving the country of a power source that once provided close to 30 percent of its electricity. 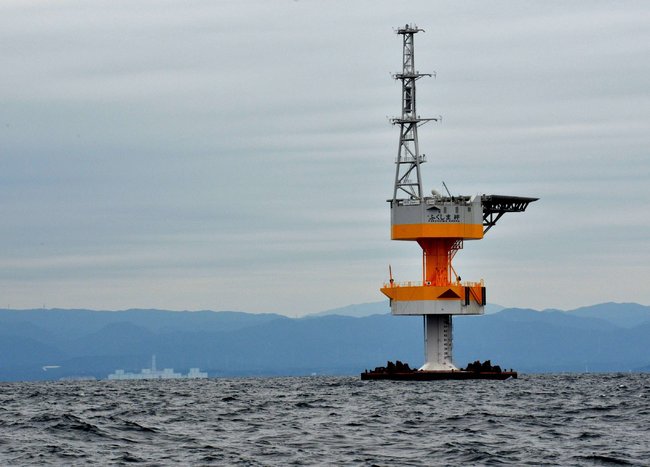 The subsequent jump in oil and gas imports to Japan has not only underscored the country’s crippling energy dependence, but has also exposed how it has lagged its peers in developing renewable energy sources. Contrary to Japan’s reputation for being on the cutting edge of green technology, its adoption of renewable energy has been slow. Excluding hydropower, less than 3 percent of the electricity it generates came from renewable energy sources in 2011.

In an effort to catch up, Japan last year introduced an incentive program to diversify its energy sources. In the program’s first 12 months, through June, the country added 3.6 gigawatts of capacity powered by renewable sources, equal to the output of nearly four nuclear reactors, the Trade Ministry said last week.

Solar power has accounted for most of the clean energy capacity added to Japan. Growth of solar projects is limited, however. Instead, over nine-tenths of Japan’s potential capacity to generate clean energy comes from wind energy, especially those placed offshore, according to estimates from the Environment Ministry.

Norway and Portugal are also experimenting with small-scale, floating wind farms, but Japan’s project is set to be the largest and among the earliest to commercialize the technology.

The biggest challenge for the Fukushima project comes from local fishermen, who have not been able to fish since the disaster and who fear that the project will take away their fishing grounds. Trawlers, in particular, would no longer be able to operate around the farm. On the other hand, there are hopes that the giant chains that anchor the turbines to the seabed will eventually encourage colonies of fish and seaweed.

Fishing cooperatives in the area have agreed only to the three test turbines so far, and the 100 more planned in the area need to be renegotiated once the impact on fisheries in the area becomes clearer.

“All we can say is that we will wait and see,” said Masanori Ono, 63, a fisherman who has worked in waters off Fukushima for over four decades. He now spends much of his time ferrying workers and guests to and from the wind farm.

Cost is another big issue. Building the first three turbines off Fukushima — each with a different design — comes to about 2 million yen, or about $20,000 a kilowatt, about eight times as much as the cost of building a wind turbine on land. With increasing economies of scale and design improvements, the consortium says it hopes to bring that cost down to about twice the cost of land-based turbines.

Durability is the third large question mark. Shimizu, the construction company, says the turbine’s blades have been designed to last at least two decades, and to withstand the biggest typhoons to have hit the region over the last half-century. But Mr. Imamura at Shimizu acknowledges that no one is certain how long, or how well, the turbines will hold up.

Still, momentum is building for the project, and not entirely for energy reasons. Offshore wind generation involves many of the industries that Japan is desperate to revive, from shipbuilding, which has lost out to rivals in China and South Korea in recent years, to heavy machinery, construction, batteries, electronics and advanced materials like the carbon fiber-reinforced polymers used in the turbine’s blades.

The 2,500-foot long chains on the three initial turbines, with links each weighing more than 450 pounds, use a total of 20,000 tons of steel from Nippon Steel and Sumitomo Metal.

The potential economic returns are exciting to executives here. Yasuhiro Sato, president and chief of Mizuho Financial Group, told a government panel on Japan’s global competitiveness this year that the roughly 20,000 parts used in offshore wind turbines could add billions of yen to Japan’s economy.

With new technology, though, there are a host of unforeseen problems. Out at sea, workers are encountering unexpected obstacles. One seemingly simple yet confounding conundrum was on display during the recent trip to the turbine, a vast structure that hardly seemed to budge despite the swelling ocean that day. By contrast, a small boat carrying Shimizu officials and a group of reporters was tossed around by the 10-foot waves and had difficulty approaching the turbine.

Mr. Imamura, clutching onto the boat’s rails, said workers would need to figure out an easier way to get on and off the turbine to maintain it. “This is something we didn’t fully anticipate,” he said.