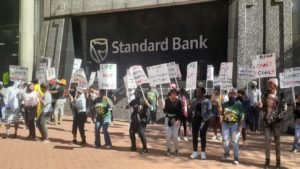 In anticipation of Standard Bank’s Annual General Meeting (AGM) vote today, Earthlife Africa Johannesburg and a large contingent of concerned citizens gathered outside the bank’s Head Office in Johannesburg to demand that shareholders call for an end to fossil fuel investments. The environmental justice organisation also calls on shareholders of Total SE, which has its AGM this Friday (28 May), to be vigilant and see the oil giant’s climate plan for what it is, a sham.

Earthlife’s Coal Campaigner Thabo Sibeko says, “We, the ones who must breathe polluted air and live in ruined environments, are calling for an end to investments in dirty fossil fuel industries. Africans are suffering because of government and corporate greed. South Africa, for example, is infested with coal mines that devastate our natural environment and problematic coal-fired power stations – currently that are causing irreparable harm to our people’s health and livelihoods, as well as the environment. And yet, we still sit with load shedding and unaffordable electricity prices, not to mention the corruption allegations surrounding Kusile.” 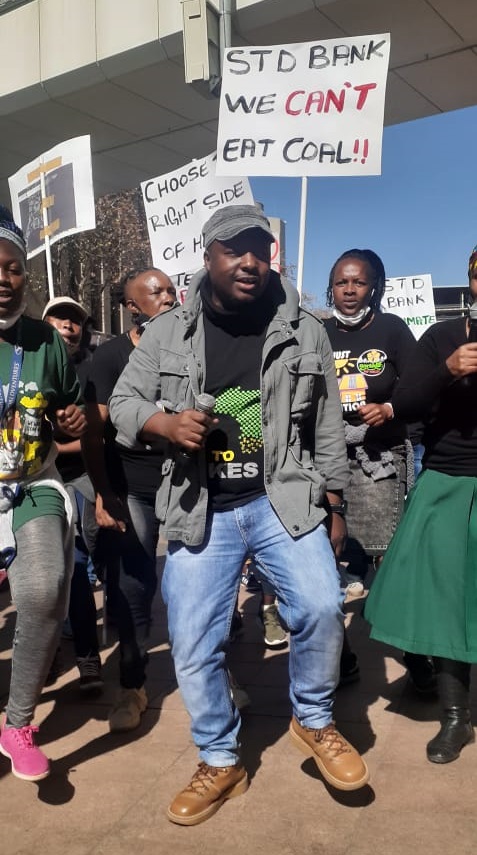 Sibeko says that the organisation and the communities it works with will continue to raise awareness about the dangers of fossil fuels, such as coal, oil, and gas because people need to know that these bad choices are harming them and ruining their future.

Sibeko says, “We are now even more committed than ever, following the recent news that a Dutch court ordered Royal Dutch Shell to dramatically slash its CO2 emissions by 45% by 2030 from 2019 levels. And, as a result of investor activism, at least two pro-fossil fuels Exxon directors have been removed. We are fighting the good fight and will continue to do so until we have the sustainable energy future that we deserve and need.” 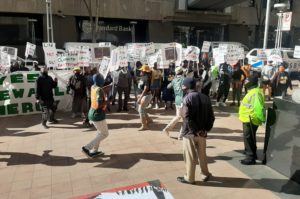 According to Earthlife’s Climate Justice Campaigner Ulrich Steenkamp, “In its recently released roadmap, the International Energy Agency (IEA)’s also shattered any delusions for new fossil fuel extraction. The IEA was clear that oil and gas projects are not aligned with the Paris Agreement. Therefore, any reasonable person will agree, we need to be moving towards a renewable energy future. Not only is it cleaner and cheaper, but it is also socially-inclusive and able to also have a positive impact on the issues of inequality and poverty that we face in this country.”

“While we know that we still have a long way to go on the road to a just energy future, these historic developments at Shell and Exxon are a great boost for climate activism around the world and here in South Africa. Citizens just need to be more informed and educated about our rights, so that we are united in our fight against these greedy tyrants who seem to have more interest in making money than they do in growing the country in a positive way.”