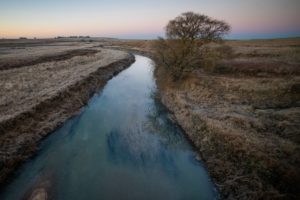 Acid mine drainage is the flow of polluted water from old mining areas. Image: Earthlife Africa

This week, as South Africa adjusts to the eased of restrictions of lockdown Level 1, more people are likely to travel domestically again, many heading to SA’s economic hub for business.

According to Earthlife Africa Johannesburg’s Makoma Lekalakala, “Many South Africans do not know that Johannesburg, the country’s largest city, is also the most radioactive city on the planet, as a result of its prominent gold mining past. During this period, in the late-1800s, uranium was merely considered a waste product, and was therefore dumped without ever being recovered. Since abandoned mines were not properly decommissioned, the tailing disposal facilities, all around the city, still have a relatively high uranium concentration today.”

“It is especially during the windier months from around August and September that residents in these areas complain about the effects of the highly radioactive and dangerous dust particles that invade their homes and make their families sick. We are concerned that very little is being done to protect the people living in the mostly black residential areas around these abandoned mines. It is important, especially at this time that the South African government is pushing for more nuclear energy, to emphasize the connection between gold mining and the devastating pollution from uranium.”

Earthlife says that in 2017, the Benchmark Foundation – an NGO that works with communities in these impacted areas – conducted a study that found that 56% of the area’s residents suffer from respiratory diseases.

“Today, we are witness to the misery and devastation around the areas of Riverlea, Snake Park and Diepkloof. On numerous occasions, over the years, those who live near uranium mines have voiced concerns over the impacts on public health, reporting high incidences of lung and stomach cancers, leukaemia, as well as birth defects. There is no safe uranium mining, and those who live around these areas or where there has been tailings, suffer more than others. These are the people who are most vulnerable and likely to die prematurely, due to the unbearable environment they live in,” she adds.

Uranium mining also has a very negative impact on the wider natural environment. Concerns include the risk of environmental degradation, contamination of the soil, reduced ecosystems viability and biodiversity, contamination of public amenities and land. This could lead to the quarantining of land for future beneficial use.

According to Lekalakala, “As devastating as the CoVid pandemic has been, this is a great opportunity for South Africa to rethink our governance system. To rethink our energy systems. To rethink what is it that we can do to protect our biodiversity. South Africa has lots of wind and sun to build and develop a formidable renewable energy sector, that is decentralised and better able to meet the energy needs of our people. SA should not even be considering any more nuclear or fossil fuels, for that matter.”

For many decades, South Africa was the main uranium supplier from Africa. However, Namibia and Niger now leads this. Around 2008-2009, the price of uranium skyrocketed to 7-fold. Uranium companies all over the world flocked into Africa to leave no stone unturned to find uranium. We also witness the rush for uranium in the Democratic Republic of Congo and Tanzania. As a result, there is a slow unnoticed genocide taking place, due to uranium mining, on the African continent.

“It appears that more than 10 countries in Africa are being bullied into dangerous and expensive nuclear energy – which is largely unwanted by multinational corporations, mostly based in Europe. Uranium has become a blessing to those who are driven by greed and do not have regard for life, but is a curse for indigenous and poor people around the world, who usually live in the areas and have to breathe-in this toxic dust. For the sake of people’s health, our ecosystem and the general wellbeing of life on Earth, the madness of uranium mining has got to stop!” she concludes.

According to Lekalakala, this new form of colonialism is forcing African governments to prioritise unsustainable development, contrary to even the Sustainable Development Goals that they have committed to. Why, with Africa’s vastly unexploited access to clean and affordable energy system, do we see an ambition to ‘nuclearise’ Africa?”