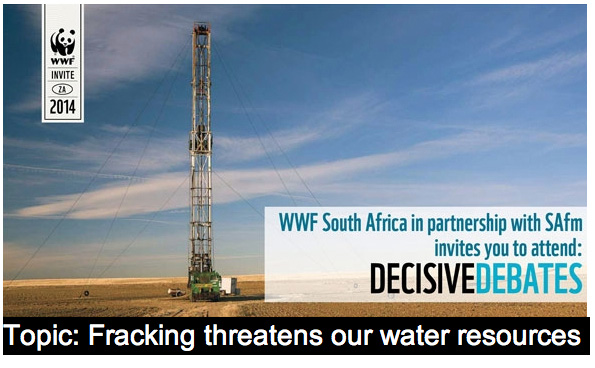 As the ANC’s new cabinet moves into gear, expectations are that President Zuma will soon issue final regulations in connection with shale gas mining. This, as promised by Mr. Zuma in his State of The Nation Address, ‘will be followed by the processing and granting of licences.’

At that point, the doors to exploration will have been opened and Shell, et al will be set loose to move into the Karoo. If and when exploration proves to be successful, even to the extent that it will keep the explorers busy enough to recover some of their investment thus far, South Africans can be assured that production – either at full scale – or under a convenient provision that permits explorers to ‘dispose’ of extracted resources will go ahead.

I guess, just as with the E-toll, many South Africans will sit and watch something happen and then wail and gnash their teeth when it is too late.  It is still not too late to get behind this issue and stop the state in its tracks.  But if people believe that it is OK because someone else is fighting it – it’s the same as not going to vote because they think their vote doesn’t make a difference.  It does matter and we can make a difference.

WWF and SAfm are hosting a debate and panel discussion on fracking on Friday morning, 30 May at 07:30 – 09:30. TKAG will be represented by Jonathan Deal, CEO. Other speakers will include Mariette Liefferink (Federation for a Sustainable Environment), Dhesigen Naidoo (Water Research Commission) and several others.

Vote in favour or against this motion: ‘fracking threatens our water resources’.
Cast your vote online at www.wwf.org.za or send an sms to 34701 (R2 per sms) on Friday morning 30 May 07:30 to 09:30
Tune in or listen online at www.sabc.co.za

Do you want Fracking in South Africa?

Will you send TKAG R50 a month, every month?

Are you in the fight to stop Fracking?

Make a direct donation to: