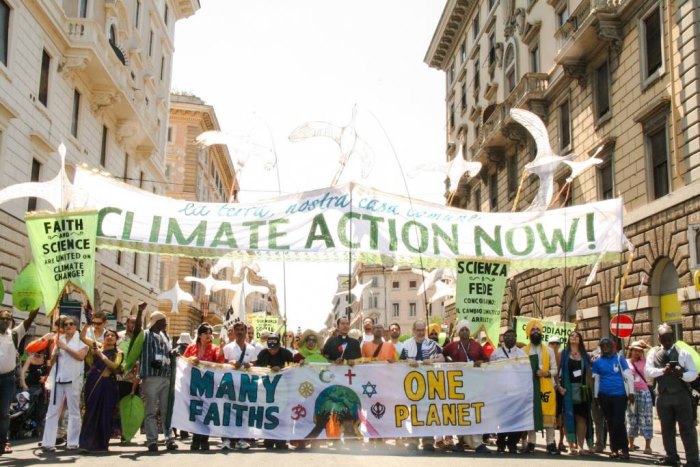 The weekend before the biggest UN climate conference of the decade in Paris, the world will stand together in a weekend of global action at the People’s Climate March. This is to send a powerful message to governments meeting in Paris: keep fossil fuels in the ground and finance a just transition to 100% renewable energy by 2050.

Last year, the People’s Climate March saw almost 700,000 people rallying for climate action across the world. This year, 350.org is going even bigger: more events in more places. And of course across South Africa there are events too. Make sure you find a spot to march, or create your own march in your area.

There are already 1000 events registered around the world — from Papua New Guinea to the Maldives to Tanzania to Monaco, volunteers are leading events everywhere! And 350 are helping organise a huge march in Paris to anchor it all.

Today, we want to invite you to join the Global Climate March chorus by leading an action in your community. With people everywhere showing that we are a powerful, big and diverse movement ready to take the streets and push for climate action, we will have the chance to set the climate conference agenda for ambition — the ambition to build the future we need.

So far, commitments from world governments have been timid and are not adding up to a global climate agreement. This is not a matter of lacking alternatives, or an economic roadblock: renewable energy is becoming a revolutionary economic force that could power a just transition away from fossil fuels. The solutions are here, and no more financial excuses can be thrown at negotiation tables. That is exactly why we need to take action.

And action 350 have been taking! Last month they helped organize workshops all over the world where people got together to discuss and plan their actions for the Global Climate March. More than 280 groups have met and made their plans, and are now going to register actions on November 28-29. A big march in Paris is also planned for November 29, right at the climate negotiators doorstep.

The people will have the last word

But there’s more: on December 12, when the climate talks wrap up, the climate movement will step up again in Paris, with thousands of us showing that no matter where the climate talks end up at, it will be the people who will have the last word on climate change. We will be supporting those taking action in Paris — stay tuned for more information about this.

We know that the real work doesn’t end in Paris, so next year we’re getting ready to take things to the next level. We need to keep fossil fuels in the ground — and that’s what we’re aiming to do with a series of global actions.

People pushing for government to get serious

The Global Climate March is the first major step on this year-long plan — so we need to make it a massive global weekend of action, with people all over the world pushing our governments for serious climate action. Will you join us?

Organize a Global Climate March where you live and join thousands telling governments to keep fossil fuels in the ground and finance a just transition to 100% renewable energy by 2050. Alternatively you can check if there’s one already planned nearby here.

None of this will be possible without the people who have the ambition our governments are failing to deliver — people like you and the members of your community, the real leadership on climate change.