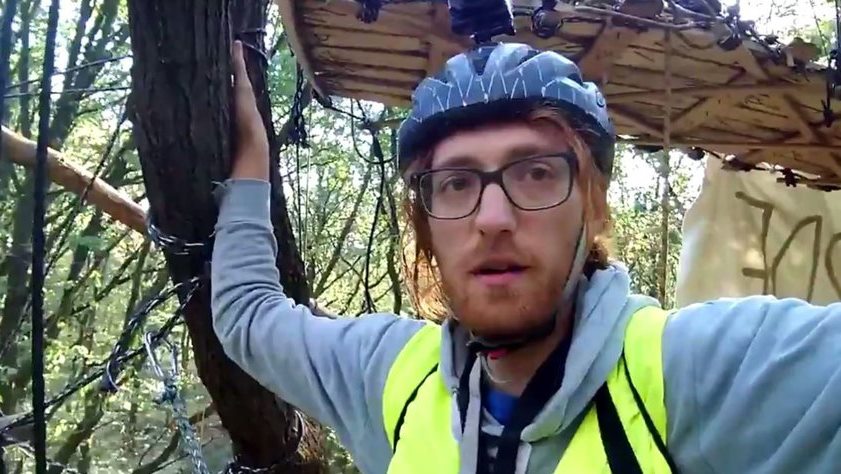 Over the last week, the German Police have deployed thousands of officers, backed up by water cannons and armoured vehicles, to evict hundreds of climate activists trying to defend the last remnants of an ancient forest in Germany from being destroyed by RWE, which wants to expand the biggest open coal mine in Europe.

And yesterday this brutal eviction ended in tragedy when it caused the loss of life of young blogger and journalist Steffen Meyn. He reportedly fell from a suspension bridge between two cabins which had been built by activists high up in the trees to try and prevent the ancient 12,000 year old and much-loved Hambach forest – known locally as Hambi – being cut down.

After Steffen’s death, tensions were running high. Last night activists pasted a statement that: “We are deeply shaken. All our thoughts and desires are with him. Our compassion goes to all the relatives, friends and people who feel concerned. We urge the police and RWE to leave the forest immediately and stop this dangerous operation. No further lives may be endangered.”

The fight between RWE and climate activists has been going on for years and has become of the defining battles of fossil fuel extraction of our time. Activists are arguing RWE has to stop mining dirty coal to protect the oak and hornbeam forest, home to protected species such as bats, frogs and dormouse. They are also trying to prevent wider climate change too. 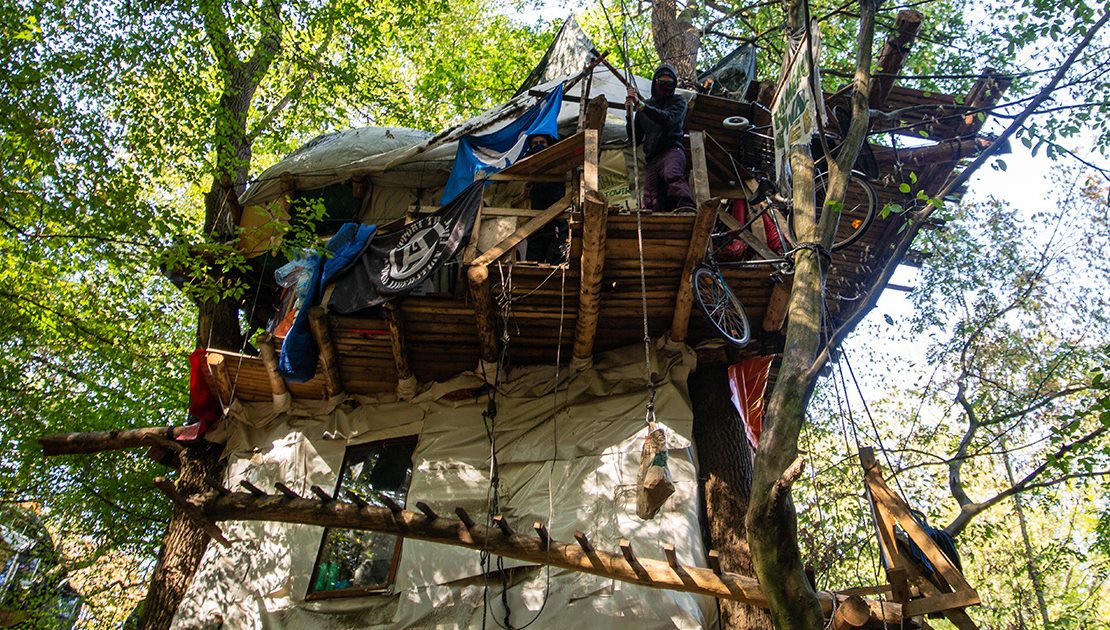 The journalist is understood to have fallen from the bridge leading off this treehouse. Image: David Speier / NurPhoto / Getty

The Hambach open-pit mine is already vast: some 85 square kilometers or 33 square miles and a huge open scar on the landscape. One of the largest man-made holes in Europe, it is half the size of the US capital of Washington D.C. Most has already been ripped up and dug for lignite or brown coal, an especially dirty and carbon intensive fossil fuel. Of the 4,100 hectares that were there origin ally, some 90 per cent has already been destroyed and only 200 hectares remain.

The tragedy could have been avoided. Like many other front-lines battles over fossil fuel extraction, it is a conflict that should not be taking place. We should not be expanding coal production. Steffen joins a list of people stretching back to Ken Saro-Wiwa in 1995, who have died fighting (or reporting on the fight) between Big Oil and Big Coal and those seeking to protect their land or the wider climate.

Undeterred by the protests and criticism, RWE belligerently plans to clear cut the forest next month and bull-doze two more villages: the 1000 year old village of Kerpen-Manheim and Morschenich. Four other villages have also been destroyed in the last thirty years, consumed by Germany’s love of dirty coal. They were bulldozed for the “common good”. 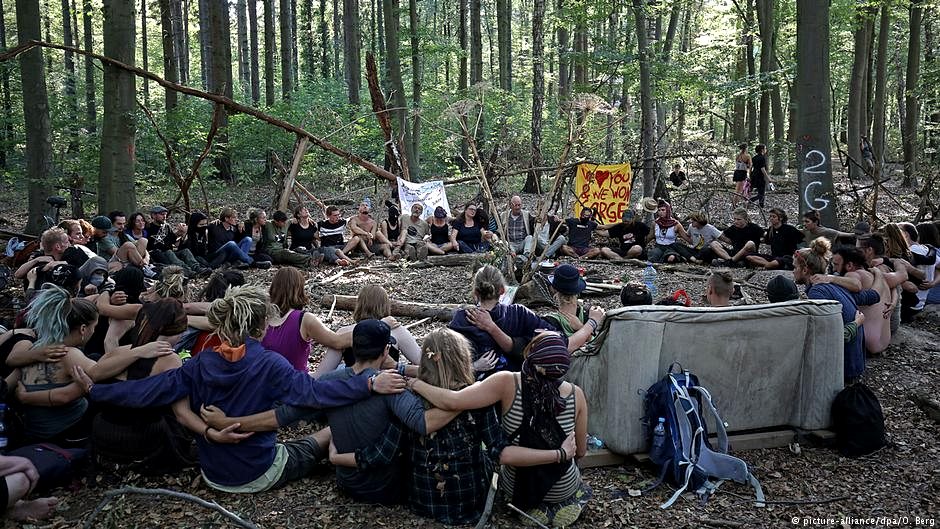 Activists and citizens took time to mourn and honor the dead journalist in Hambach Forest.

But the fight to protect the forest has been growing for years and has come to a head this week, with Police trying to evict the protestors. Last Sunday, saw thousands of activists – some estimates say 9000 people – march towards the woodland between Cologne and Aachen in support and solidarity.

Others remain in the treetops. One of them is Mux, who told DW: “The problem is that it’s not only destroying the forest and nature here, as well as the place where people in this region live, it’s also causing climate change. There are lots of people dying because of global climate change, which is caused here, so I think I have to use my privileges to stand against that. I have to do it because I can do it.”

Another activist, Emil Freitag, from Aktion Unterholz, adds: “It’s not just about the forest, the forest is a symbol for climate justice and if we stop the eviction and the cutting of the forest, we can also stop the lignite mining in the area. That’s what all this is about. We want Germany to stop coal mining immediately because it’s the dirtiest form of power. So the forest is a kind of symbol.”

He is not alone arguing that the forest is a symbol of the fight between dirty coal and a clean energy future. Andreas Büttgen of Buirer für Buir, a citizens’ initiative from the nearby town of Buir, also says: “The Hambach Forest — for us a symbol of a future-orientated society — now threatens to become a memorial for the destruction of our future.”

And the figures back him up. Kai Niebert, head of environmental group, Deutscher Naturschutzring, argues that expanding the mine would make it almost impossible for Germany to meet its 2015 Paris Agreement commitments. “There’s around 1.5 billion tons of carbon under us here in the Hambach area,” he says. “If it was burned, we would use up virtually all Germany’s carbon budget, and that would be anything but a socially acceptable way to exit coal. It would mean all the other mines in Germany would have to close tomorrow.”

After last night’s tragedy, noone is sure what will now happen. In response to Steffen’s death, the North Rhine-Westphalian state government has suspended the clearance “until further notice”.

A petition signed by 500,000 people due to handed in today to North Rhine-Westphalia’s state premier Armin Laschet calling for the state government to step in and save the forest, has been postponed.

If there is any good that can come out of Steffen’s death it is that RWE should stop mining dirty coal. They should also stop clearing the forest immediately too and declare that this last remnant will never be cut down. And maybe they should rename this ancient beautiful forest of oaks and hornbeams after Steffen, too.