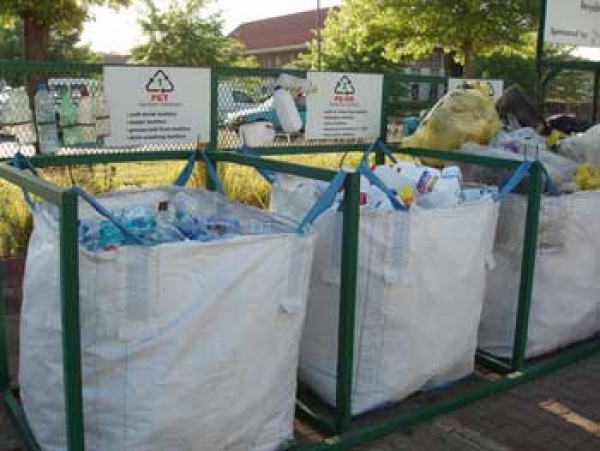 It’s the middle of a cold and stormy Cape winter and your hollow-fill duvet or thermal underwear might just be made from recycled PET.

The most common container in the soft drink market today in South Africa is the plastic bottle, the polyethylene terephthalate (PET) bottle. The PET container is the transparent, rigid plastic bottle used to package bottled water, carbonated soft drinks, sports drinks, water, juice, household cleaners and food trays. It’s a polymer manufactured from oil based raw material, and is tough, resilient and 100% recyclable. The first PET container was recycled thirty years ago.

In 2000, Peninsula Beverages, the Bottler of the Products of the Coca-Cola Company in the Western Cape, was one of the pioneers in forming the company PETCO, whose sole mission is promoting and improving the waste management and recycling of post consumer PET products on behalf of all stakeholders in the PET industry in South Africa.

The organisation has taken the lead in PET recycling in South Africa from under 1000 tons in 2000 to over 22 000 tons (28%) of beverage bottles recycled in South Africa in 2008 – this represents more than 1.5 billion bottles to date.

According to Greg Morse, PenBev’s Manufacturing Director and chairman of PETCO:

‘We have set our sights high by establishing a range of ambitious PET recycling targets and goals. Our target for 2010 is 38% of beverage PET recycled.’

PETCO CEO Cheri Scholtz says ‘Fortunately South Africa has significant recycling capacity and a niche fibre market, but new end-use markets, and bottle to bottle recycling, where a percentage of PET recyclate can be used back in original packaging will be critically important going forward.’

‘Peninsula Beverages makes use of composite lumber (made from recycled plastics) in the form of crates and pallets in all their production processes,’ added Morse.

This year, the PET industry has taken the first steps to obtain approval from the Health Ministry of SA for standards and protocols for the use of recycled content in food contact packaging. This is the first step in closing the loop and developing bottle-2-bottle recycling in South Africa.

‘There are currently fifteen B2B recycling plants in the world. For this to become a reality in South Africa, we need a clean, consistent supply of post consumer bottles at the right price. This will ensure good clear PET bottle scrap to give B2B technology a chance to develop in SA along with job opportunities,’ says Morse.

Probably 55% of the PET collection and recycling currently achieved is in the Gauteng area, where the largest PET market is, with Cape Town following at 34%.

What happens to your used PET bottles and containers?

Discarded post consumer PET bottles are collected, principally by informal collectors, baled and delivered to the recycler. The sorted bottles are washed and then conveyed to a granulator, where they are reduced to flakes which are washed, dried and then extruded into pellets.

Some interesting facts and figures about PET:

Collect-a-Can Regional Manager Rodrick Resandt says that the organisation has been successfully recycling used beverage cans (UBC) across Southern Africa. Its model not only provides a regular income to an estimated 37,000 people in the lower income segments, but results in a recovery rate of 70 % in Southern Africa, one of the highest beverage cans recovery rates in the world. Resandt says that the organisation runs a very successful school clean up programme. ‘Peninsula Beverages is one of our key supporters and makes a contribution to the schools prize money. Millions of school children have been introduced to the idea of caring for the environment. Collect-a-Can schools competition attracts close on 700 schools annually, earning cash and prizes.

We are creating a new attitude.

Back to the cradle

Greg Morse added, ‘In addition to supporting an organisation that shows profit financially, socially and environmentally, like our PET recycling involvement, we strive to support the ‘cradle-to-cradle’ nature of steel recycling.

‘The recovery rate for used beverage cans for southern Africa has grown significantly from a modest 18% in 1993 of all used beverage cans sold in southern Africa to an all time high of over 70% currently,’ said Morse. ’40 million South Africans produce 42 million cubic metres of waste a year and the steel content of this waste has reduced from 8% to 1% thanks to the efforts of Collect-a-Can.’

Resandt added that since 1997 Southern Africa has ranked among the best in the world in steel beverage can recovery.