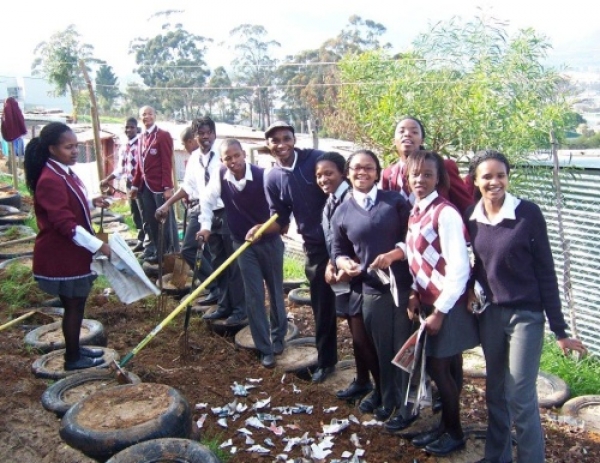 The one thing more heart-warming than food being planted for a crèche in Kayamandi, is seeing the teenagers from Kayamandi High School pitching in with absolute joy. On 19 July they contributed their 67 minutes for Mandela by planting spinach, onions, lettuce, beetroot and spices next to the Siyavuya crèche, a project by the Vuya Endaweni Community Conservation Partnership.

The non-profit organisation (NPO) Vuya Endaweni started about two years ago after Enkanini, an informal settlement, developed next to Papegaaiberg. Informal dwellers were collecting housing materials at the dumpsite, walking through the suburb of Enkanini. This caused concern among Onderpapegaaiberg residents and the Middlevlei Farm about the possibility of increasing crime and reducing property values.

A group of neighbours got together and decided to address the problem in a positive manner and approached the informal settlers in a church situated in Enkanini. A committee was established including members from Onderpapegaaiberg, the informal area, Kayamandi and Middlevlei Farm.

The committee developed a tourism trail, trained nature guides, planted trees, startedvegetable gardens and founded the Siyavuya crèche. ‘We now want to expand the vegetable garden to include a Renosterveld tea garden as a tourist attraction. We are looking for Renosterveld plants, garden furniture and kitchenware to start our tea garden. We also sell craft and second hand clothes and need more of those to sell at our office in the Tourism Corridor,’ Dr Leanne Seeliger, co-ordinator of Vuya Endaweni said.

The idea for the Siyavuya crèche was suggested by members from Enkanini, as the parents felt a great need for a safe and affordable place close to home to leave their children during the day. The crèche consists of two Wendy houses, and currently there are 15 preschoolers (3-5 years old) and 10 babies (0-2 years old), who are taken care of by two teachers and a teacher’s assistant. There is no electricity or water and therefore no toilets. The children use a ‘bucket system’.

The crèche has no kitchen. Toddlers whose parents can’t afford to send along lunchboxes currently receive sandwiches from the nearby primary school. ‘The vegetables from the food garden will be cooked at the Ikaya primary school and used as soup for the kids and the church,’ Elliot Nkaune, a church volunteer, said.

‘We use an easier, less intensive method of planting that works perfectly in the muddy and clay areas in Kayamandi. These ‘lasagne beds’ allow air to get in and keeps the soil healthy,’ Nkaune said.

The grade 11 and 12 scholars from Kayamandi High School knew what to do during the planting session. They tore up old newspapers and sprinkled them on the raked soil. This was followed by a soil fertiliser. They then added a second layer of newspaper, sprinkled it with more soil and wet it with water to form a fertile mush on which the vegetables were planted. ‘Now we are left with a layer of soft fertile soil on top of the clay soil. The newspapers aerate the soil and this method ensures that the vegetables are rooted well,’ Nkaune said.

‘We want to give back to the community for Mandela. This is the least we can do,’ a young learner in his maroon and gold school jacket said.

Throughout the 67 minutes of planting the sound of house music echoed loudly through Kayamandi and even Umshini Wami popped up on someone’s playlist. At the crèche itself the 2-4 year olds were singing their traditional educational songs. These included our national anthem and ‘Special me’ on the Afrikaans ‘Vader Jakob’ tune. They all sang with enthusiasm, even if they didn’t know the words and clapped their hands and swayed their little hips.

Currently the crèche functions on the income generated by school fees (R150 per child per month), jumble sales and contributions from individuals. Apart from ongoing needs, a lot still needs to be done in terms of infrastructure. Please see the list below for items needed.

Story and photos by Willemien Calitz.