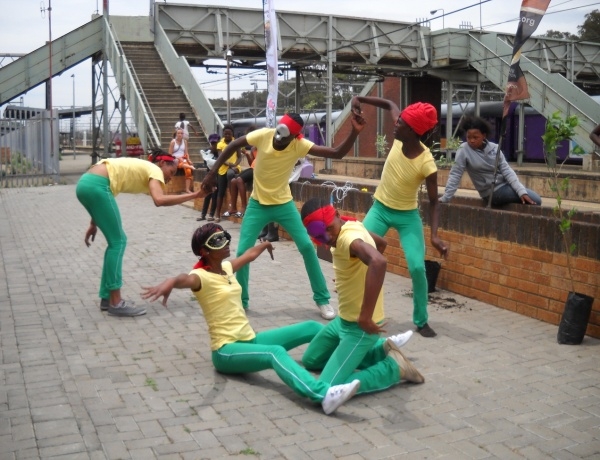 For the past week we’ve been doing a lot of climate talk, tree planting and painting with the aim to raise awareness about climate change. We’ve travelled through four cities and worked with over 3000 children and adults, but when we arrived in Klerksdorp on Friday, we were taught a couple new moves.

Known as the ‘city of people’ the footprints of the first gold miners still run deep in the streets of Klerksdorp. Now, years later, this very community is creating a new kind of footprint – a lower carbon footprint, that is.

In a predominately Afrikaans speaking area, John Sekobo from the Abogazi cultural dance group found that it became increasingly difficult to explain concepts such as ‘climate change, greenhouse gasses and mitigation’ to community members, particularly children.

With a deep love and appreciation for nature and the preservation of it, John, together with five other group members came up with a plan to teach children more about climate change. This plan involved no long power point presentations or complicated terms; just a few beats and freedom of movement.

John explains: ‘What child likes to sit in hour long presentations about things they have no knowledge of? Because it’s such an important issue and vital that they receive as much information about it as possible, we started a dance group, teaching and educating them in a fun and relaxed way.  Through dance we endeavour to teach children the effects of climate change and show them ways to contribute to making a change. ‘ 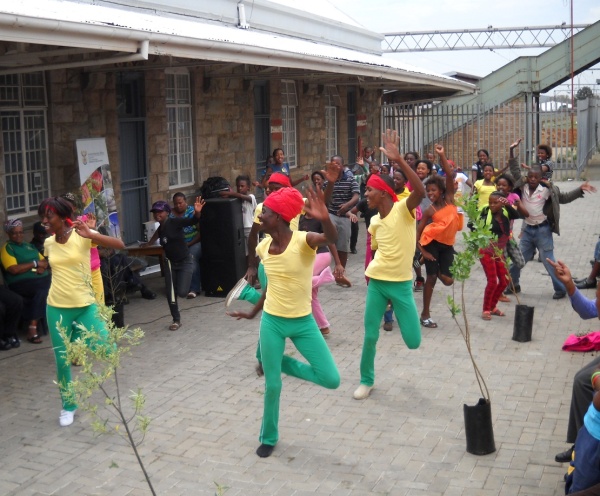 Using plants, soil and even oxygen masks as props, children are taught about the importance of plants, weather pattern changes and health consequences  by exploring new dimensions of climate change through the movement of their bodies.

Seipati Lemeku (11) from Vaal Park, who was on board the Climate Train for the afternoon’s activities, said Abogazi offers her a fun way of learning new things. ‘My friends and I love to dance. The Abogazi cultural dance group makes learning so much fun. While we practice the dance moves, we learn about plants and nature,’ she said.

She added that everything she learnt on the train, was part of their dance routine.
Pick it up and recycle

‘In the train we were taught about Mother Earth and how it’s important to look after her, because all the litter and pollution is making her sick. When John and his group visited our school to teach us the dance, we were taught that plastic and garbage were all bad for the earth and that we should pick it up and recycle it instead,’ she continued.
Diketso Molema (12) said although she learns a lot at the dance class, activities on the train also helped her to gain new knowledge.

‘We watched movies about climate change and wrote messages to Mother Earth. I am happy that I came. I am excited to go home and tell my family about my experience.’

Relationships with earth and air

Dressed in yellow and green, the Abogazi cultural dance group entertained the community on the stoic station, incorporating both plants and oxygen masks. Their routines consisted of three movements, using a combination of physical theatre and dance; exploring the relationship they each share with earth and air.

As they moved effortlessly across the platform, each dancer inhaled deep breaths of air as though if every breath was used to enrich their bodies, which gave the illusion of a dying and sick patient grasping for his last breath.

Later on about  40 children joined them on the platform as they expressed their love for earth through dance.