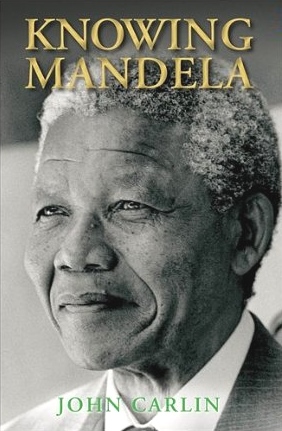 I have never felt the need to read a book about Mandela, though I have always adored him. But by grace a little book came across my path … Knowing Mandela by John Carlin. Of course I want to learn more now, but I also suspect that having started with this one, it will be very hard to match.

John was the South Africa correspondent of London’s Independent newspaper from 1990 to 1995 – the pinnacle time when the true genius of Madiba orchestrated the most magnificent transition in the world amidst dire risks and unrest. In sharing his close-up experience, John charts the father of our nation’s delicate footwork during a time of intensely opposing needs and fears, combining his journalistic attention to detail and enquiring, even sceptic, mind to assess the story from all angles.

As a fellow journalist it was fascinating, sometimes frustrating, to notice how the author strives to describe the most exceptional behaviour of an advanced soul, without resorting to ‘spiritual’ terminology.

Using beautiful words, like ‘munificence’ (the quality or action of being extremely generous) he showed how Madiba treated all human beings always with the greatest of respect and gratitude – even those whom anybody else would have  considered enemies. For example instead of firing the staff that served the previous regime, when he took over, he marvelled at their capacity to adapt and serve him with ease in the Union building.

Or the lovely vignette,  when Madiba first met Zelda le Grange. Overwhelmed by the “Afrikaner guilt,” which we all have, she burst into tears when he addressed her unexpectedly in perfect Afrikaans. He held her hand while she was emotional, put his other hand on her shoulder and tried to calm her, saying “No, no, no … this is not necessary, you’re overreacting a bit.” Was this an absolution of her and others who grew up in a Nationalist regime? It had me in tears. The hand of forgiveness, for which he became so famous. She was 23 and he 76. She a secretary, he the president. They were inseparable for the rest of his days.

The Madiba grace was also illustrated in the close relationships he forged with his jailors, particularly one man whom he proceeded to help, support and encourage afterwards. It seems that whenever there was ample reason to hate, he loved instead.

What was also news to me was Madiba’s love and understanding of the Afrikaner in general. How he studied the history, spoke the language and had compassion at all times. And hence how masterly he managed to turn everyone into friends, even those who were “instinctively racist,” even the “Bittereinders,” like Constand Viljoen. He understood the original boere-instinct and love of the land – including their fears and anxieties and even empathically expressed his awareness and grasp. And so he was gracious enough to publicly call President De Klerk as “a man of integrity.”

Compassion builds the bridges we need

With so much war and conflict on this planet – and in our country – those in negotiations and peacekeeping can learn from Mandela’s intricate and sensitive footwork during the most delicate time in our country’s history. He was indeed a master negotiator, using compassion for and understanding of both sides to build the bridge towards our new nation.

Surely his life could inspire anyone to rise above the self-interest of polarities, to move beyond intellectual justifications for violence or recompense and find the human needs and creative solutions beyond the differences.

How did Madiba qualify himself as “quite possibly the most unanimously admired head of state in history”? How was he moulded and grown in the silence and contemplation in captivity?

“Prison had taught him to take the long view and preserve his self-control.” After 27 years he looks back and calls his time inside “an opportunity which is also very rewarding,” and expresses gratitude for those who “did everything to try and make you as happy as possible.”

Planet-wide the old is falling away. Injustice is coming up to the light at the rate of knots. Chaos proceeds a new order. Letting go of what is familiar is the new skill which we all need to hone. Even here Madiba showed us how.

Like when he moved into his new presidential office,  Madiba was “gracefully at ease in his presidential role as if he had spent the past third of his life not in jail, but amidst the gilded trappings that his white predecessors had lavished on themselves to compensate for the indignity of knowing the rest of the world held them in contempt.”

Always adaptable, he could speak to anyone and his genuine interest became his trademark. Reducing himself to the level of the person he was addressing, he respected everyone equally and showed the humility of greatness.

Loafing on an island for many years

Quick to forgive and apologize, and falling back on a great sense of humour, he used the technique of self-depreciation. Joking with himself, he even referred to his time “loafing on an island for many years.” Seeing the light – even in jest –  in such darkness, I am inspired to rise above my own difficulties too. “Always with a cheery mischief in his eye he was always regal yet approachable.”

Though so enlightened, he was also realistic and pragmatic: Aware of his limitations, he announced right from the start that he would only serve one term in office – an example to leaders everywhere. He emphasised that much needed to be done to ensure that all the good work of the liberation struggle was not undone. How true this holds today.

I could go on about his exemplary manners, his true chivalry, his appreciation, how he honoured everyone. The pinnacle of his mastery possibly goes to the maturity of his leadership. Always focused on the long view, and self-discipline. Qualities that he credited prison taught him. He signalled that “a mature patriarch had taken charge and the time for rash action and dangerous talk from his followers was over.”

I don’t believe anyone can read this little, but powerful, book without being effected by the sheer grace of this man’s life. It should serve as a guidebook for our current parliament and politicians. What blessed energy that would blow into the lack of respect that is so often bandied about, raising the levels of honesty, integrity, maturity and wisdom.

If Madiba could find meaning in his suffering, then so can all of us. If he could turn injustice into the liberation of the human soul, then so can we.

“What a hallelujah!” said Bishop Tutu after Madiba’s first press conference.  This best describes the overwhelming  feeling that stayed with me after this gracious read.

“Humanity is, and always has been, capable of great things, and there is always room and reason for us to do better,” said John in the preface.

May we lock into the slip stream of this grace, integrate it as caring and active citizens, and drive this country towards good.
We were kindly gifted a few copies of Knowing Mandela. Please leave a comment below this story, if you are keen on a copy.

This is a must read for all South Africans.