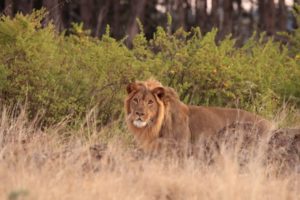 When you think of a species on the brink, you probably don’t think of the African Lion – the king of the African savannah. But for the last two decades the lion has been quietly sliding closer to extinction, and Africa has lost half its wild population of this iconic species in the last 25 years alone.

A new knowledge hub, recently launched by the Endangered Wildlife Trust (EWT), under the auspices of the Cat Specialist Group (CSG) of the IUCN’s Species Survival Commission, plans to accurately quantify the numbers and population trends of the African Lion, and document its presence or absence across its range.

Although the African Lion is one of the best-studied big cats, there is still uncertainty as to how many remain and where they occur across the continent. Existing information tends to be dispersed among various institutions, preventing optimal conservation impact for the species as a whole. In October 2018, the EWT and CSG embarked on an exciting project to address this issue and develop the African Lion Database, a platform to consolidate critical data on this iconic species.

The database is hosted by the EWT on behalf of the broader conservation community and will be used to compile, analyse, and store data on African Lion distribution, abundance, and population trends, and support the continuous assessment of the status of lions across the continent. This is significant because the more we know about a species the better we can protect it, by guiding conservation action and directing funding resources to where they are most needed. 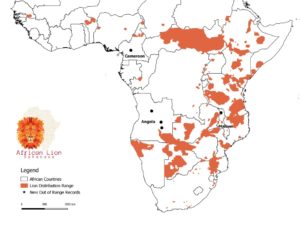 This project has been collating existing data from reserve management, researchers, existing data platforms, and from governments for the last six months and, in the countdown to World Lion Day on 10 August 2019, we can already share some exciting new insights into the distribution of lions in Africa. For example, the presence of a resident male lion in Nyika National Park, Malawi, was recently confirmed by Central African Wilderness Safaris. Months after the initial report, the EWT received photos to confirm his presence. Another exciting record comes from Angola, where a sighting of a male and female with their two cubs was recorded in Luando Special Reserve.

These are the first female and cubs to be seen in more than a decade in this area. A recent Born Free expedition recorded a small pride of lions for the first time at Mpem and Djim National Park in southern Cameroon – again, in an area where lions were considered to be locally extinct. These records provide some hope that lion populations are beginning to establish and increase in areas where hope was lost.

This project is made possible with the financial support of the Lion Recovery Fund and National Geographic Society. It was also recently showcased thanks to support from aha Hotels and Lodges, aha Ivory Tree Lodge, and the Pilanesberg Wildlife Trust, who, because of their commitment to lion conservation and support of the EWT’s Wild ‘n Free campaign, hosted members of the media in Pilanesberg National Park in the build up to World Lion Day.