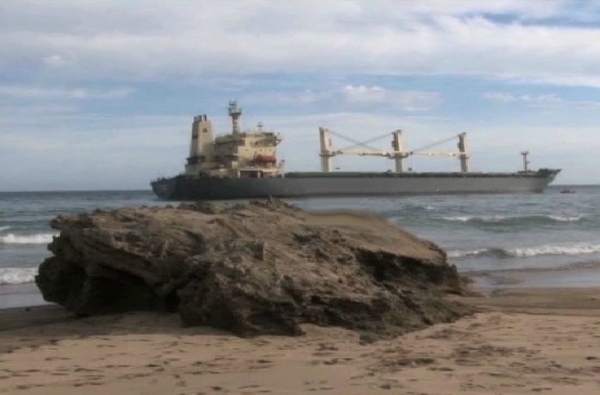 Almost a week later, and the Kiani Satu cargo ship remains stranded off the coast of Buffels Bay, Knysna. Officials are working hard and fighting the elements to float the vessel away from the protected coastline.

Saturday morning 3 tonnes of oil had spilled into the ocean. By Monday 15 tonnes mar the marine protected coastline of the Goukamma Nature Reserve, which stretches 14km along the Garden Route coast.

The ship was carrying 330 tonnes of fuel oil and 15 000 tonnes of rice when it ran aground on Thursday 8 August due to a technical failure. Since then many attempts were made to salvage the cargo and refloat the ship. SA Marine Safety Authority (SAMSA) has been present on the scene, as well as CapeNature, SanParks, the local municipality and police and several government officials – a total of 322 people working hard to manage the potential disaster.

Attempts to complete salvaging the ship on Monday and have it refloated by 5 pm were foiled due to a technical failure in the Russian helicopter. The wreck is difficult to access hence helicopters are needed. Smaller helicopters are now bringing the equipment to the ship for the salvaging to commence. Nigel Campbell, spokesperson of SAMSA, says he hopes to start the refloating process on Tuesday at 5 am before the heavy weather sets in.

“The wind is affecting the swell we want. Mother Nature is not playing along. Basically two hours before every high tide we pull with the tide. We have been doing that twice a day.” The Kiani Satu has not come completely off the shore, but has swung by 45° off the beach to face the open sea, which is “positive” according to Campbell.

Much work is being done to manage the spillage “[They are] drilling into tanks to take the oil out. It has not been heated for a week now, so we are going to try to put the oil into plastic tanks and fly it off the ship,” says Campbell.

Onshore work has also been hard. The Garden Route National Park has been managing on site using bulldozers to dam up the Swartvlei River in order to prevent pollution of the freshwater. Booms have been roped across the ocean to contain the oil and prohibit it from spreading further into the Goukamma and Swartvlei Nature Reserves.

The nearby Protected Marine Area affected by the oil spill stretches 1.8km into the Atlantic Ocean of the Knysna coastline. This bio diverse area supports wildlife species like Grysbok, bushbuck, bushpic, and the honey badger. It also sustains over 220 bird species such the Knysna loerie and the rare African black oystercatcher, and occasionally provides a habitat for the endangered African penguin.

Teams have been on standby to rescue any marine life affected by the oil. On Monday morning 3 penguins crawled onto the beach covered in oil and were taken to Tenikwa Wildlife in Knysna for rehabilitation. Locals are waiting anxiously, hoping the wreck is cleared soon to avoid further damage to the sensitive ecosystem.

Who gets the bill?

SAMSA confirmed that the ship’s insurance is covered by the owners who have indicated that they will be responsible for all costs, including both the salvage and the cleanup of the polluted area.

“We have responsible owners who have the best insurance in place. Evidence of this is that they have flown in experts from all over the world to give assistance. Financial commitments are being met and there is no doubt in my mind that there will be no costs to the state in this exercise,” said Campbell.

The biggest priority is to remove the freighter before more damage is dealt to the sensitive ecosystem of the Goukamma coastline. Marietjie Engelbrecht, spokesperson for CapeNature, says these waters are a vital feeding ground for fish migrating past the southern coast of Africa. Resources from insurance will be pumped out to finance the extensive clean up of the affected areas. SAMSA are currently attempting to work with the tides in order to float the ship out to sea.

Friday’s update: The oil leak in the Kiani Satu has been stopped. On Thursday SAMSA pumped the fuel oil onto higher parts of the vessel to avoid further contamination of the ocean. SAMSA spokesperson Nigel Campbell says the safest way to remove 300 tonnes of oil is to fly it off the ship in plastic bags. MEC of Tourism Alan Winde said there is a decreased amount of oil seen along the coast. “It was about 75% less than it was two days ago.”

We hope that this method of airlifting the oil is successful.