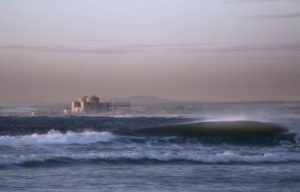 Eskom has released a statement confirming the suspension of Koeberg’s General Manager for performance-related issues. This is concerning as it raises several questions from a safety perspective.

Eskom’s chief nuclear officer, Riedewaan Bakardien, is now also doing the job of Koeberg plant manager, which means he can’t be giving 100% of his attention to either job. What aspect of these jobs is going to be neglected during this time?

It also shows that there is a lack of nuclear expertise within Eskom as there is too much reliance on too few people. Will South Africa have the skills to continue operating the plant into the future, as well as safely disposing of the high level radioactive waste when it is finally decommissioned?

Not so reliable after all…

Also, the reason for this suspension is performance, as half the Koeberg plant has been down since January 2021. This is embarrassing to Eskom particularly at a time when some are trying to claim that nuclear power is reliable and cheap, and to use that as a justification for procuring new nuclear power and extending the life of Koeberg. In the hands of Eskom, a nuclear plant is more dangerous than reliable.

But what about the safety aspects at the plant? Presumably an underperforming plant manager has also neglected effectively managing things in other areas such as maintenance, repairs and the emergency readiness. Any problems in these areas may only come to light in the event of a malfunction of one of the nuclear reactors with potentially catastrophic results.

When it comes to the next person appointed to the position, the message is clear: keep the plant running or face suspension. This is deeply problematic.

There are times when a minor equipment failure should result in a reactor shutdown even if the probability of it causing an accident are small, according to nuclear safety protocols. But any new manager will be conflicted between exercising an abundance of caution for the sake of safety, and keeping the plant running for fear of suspension.

The Koeberg plant itself is old and deteriorating more rapidly than expected, and Eskom wants to get approval this year to extend its life by another 20 years. For example, the two containment buildings have been corroding faster than expected, and in 2018 a crack was found all the way around the top of one of them. Will repairs and maintenance be given enough attention by the new plant manager when the pressure is on to get both reactors running again, or to face suspension?

The suspension of Koeberg’s plant manager shows that Eskom is not able to effectively operate a nuclear plant and especially not one that is already on its last legs. Ignoring the fact that one is offline, the two reactors at Koeberg represent just 3.6% of national nominal generating capacity. They are simply not worth the risk.