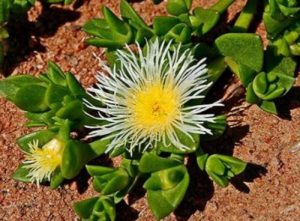 Indigenous natural and healing plants should be used with caution. In the case of the plant Sceletium tortuosum, the science seems to show that people should be careful not to overdose.

Scientist Dr Carine Smith of Stellenbosch University warns that if you want to chew its leaves to calm you or make you feel less depressed, you should do so in moderation; don’t indulge yourself indiscriminately.

She recently published research on the effect of sceletium in vivo on the psychological stress of rats in the Journal of Ethnopharmacology. Her research shows, among other things, that too big an intake of the plant can lead to diarrhoea and suppression of certain parts of the immune system.

Sceletium tortuosum – traditionally also known as kougoed (literally, ‘something to chew’) or kanna – is a succulent-like ground cover that grows particularly in western and eastern South Africa, favouring quartzite soil. The Khoi, we are told, chewed or smoked kougoed or fermented it before using ti as a sedative with anxiety-alleviating properties and as a light anaesthetic for toothache.

According to SANBI research ‘The use of ‘kougoed’ by the Khoi-khoi and San peoples as a mood enhancer, sedative and analgesic for toothache and stomach pains, and appetite/thirst suppressant was noted and recorded by early settlers at the Cape, who adopted its use for similar purposes. This has continued to the present day.’