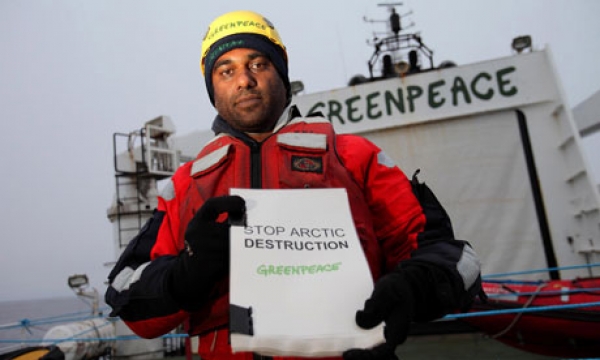 Kumi Naidoo, South African born International Executive Director of Greenpeace International, and 5 other Greenpeace activists have been attacked and shot with water canons by Gazprom workers after they embarked on a courageous venture to save the Arctic. They had interrupted the work at the Gazprom super monster drilling platform in the Arctic.

At 4am local time the activists set off in three inflatable speedboats from the Greenpeace ship Arctic Sunrise and scaled the platform via mooring lines. Six climbers have taken up positions on the structure and have interrupted the platform’s operations. The activists are out of reach and have enough supplies to last them for several days.

This is the second time Naidoo has engaged in direct action to oppose Arctic oil drilling. The South African human rights activist boarded a drilling rig operated by British company Cairn Energy off Greenland in June 2011.

Earlier this week, scientists at the US National Snow and Ice Data Center predicted that Arctic sea ice would soon match 2007’s lowest ever recorded extent before setting a new record in September.

over a million people join movement

Speaking from a ‘portaledge’ slung below the platform, Naidoo said:

“We climbed Gazprom’s rusting oil platform backed by over a million people who have joined a new movement to protect the Arctic. We are here on their behalf. We are also standing shoulder to shoulder with the Russian Indigenous Peoples, who just last week signed a joint statement opposing offshore oil drilling in this area, which is near their traditional territory.”

“Like Shell’s reckless plans to drill in Alaska, it’s not a question of if an oil spill will happen, but when. The only way to prevent a catastrophic oil spill from happening in this unique environment is to permanently ban all drilling now.

“This threat affects us all. In my home country of South Africa we are now facing a far more dangerous climate because companies like Gazprom and Shell are pumping money into politics and blocking clean alternatives so that they can extract the last drops of oil left. We’re here in the Arctic to draw a line in the ice and say ‘you come no further’.”

operating without a response plan

Last week Greenpeace discovered that the Gazprom platform is operating without an official oil spill response plan. Gazprom’s response plan was approved in July 2007 for a period of exactly five years. The Russian Ministry of Emergency admitted to Greenpeace in a letter that a new spill plan has been neither submitted nor approved.

The Arctic is one of the most extreme and hostile environments to drill for oil on the planet. The Gazprom drill site is covered by thick sea ice for nearly two-thirds of the year, whilst temperatures as low as -50˚C are not uncommon. The Pechora Sea is often battered by fierce storms and during the long northern winter is plunged into months of almost total darkness.

Despite such extreme conditions, Gazprom has only released a summary of its oil spill response plan to the public. Yet, even this document shows that the company would be completely unprepared to deal with an accident in the Far North, and would rely on substandard clean-up methods — such as shovels and buckets — that simply do not work in icy conditions.

A full briefing on Gazprom’s Arctic oil drilling programme can be viewed here.

A live ‘ticker’ of signatories to Greenpeace’s Save the Arctic campaign can be viewed at www.savethearctic.org