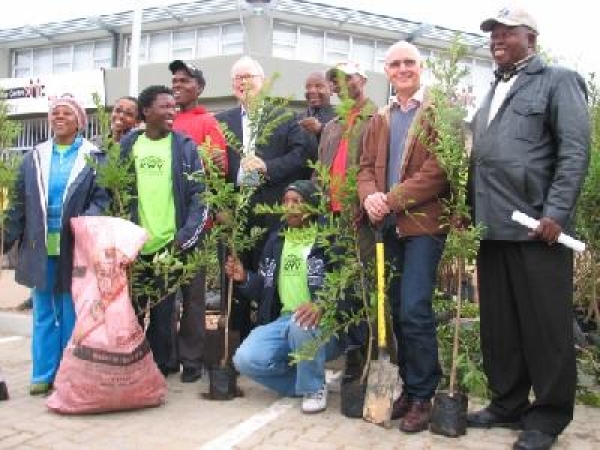 More than 300 community members from Paarl-based township Mbekweni participated in an extensive tree-planting initiative, launched by KWV yesterday. 500 fruit trees were planted as the first phase of a project that aims to establish 2 670 trees in the next year.

KWV completed a baseline study in 2008 to determine its carbon footprint and immediately several carbon reduction strategies were explored – and one of them involved planting trees. Out of the five available community-based offset projects, the company chose to plant trees in its surrounding communities because it felt that this would empower people through:

The tree planting project is spearheaded by KWV’s Viticultural team, Unathi Mantshongo and Cobus van Graan, in partnership with award-winning greening social enterprise, Food & Trees for Africa. The first 500 trees – consisting of 6 species, namely Karee, White Stinkwood, African Olive, Water Berry and the Cape Holly trees – were planted yesterday, with the rest to follow during the year. With the 2670 trees it plans to plant, this will sink its carbon emissions (1000 tons over the next 15 years) and provide many benefits for the disadvantaged settlement.

Mbekweni is a settlement that was formed in the mid 1950’s, when this community was forcibly moved to this area between Paarl and Wellington. This predominantly Xhosa-speaking community has a high rate of unemployment. Some of the residents rely on seasonal work on nearby farms, work as domestic workers and find temporary work at the local municipality. As part of the government’s efforts to create a better life, Project 2 low-cost housing project was implemented between 1997 and 1998. Currently over 2000 low cost housing units have been constructed and occupied in the area. Due to the population growth of this area, it currently has a number of sub-settlements namely: Thembani, Silver Town and Polar Park.

The housing assistant manager for Project 2, Similo Tshali, welcomes the company’s greening intervention, “This greening legacy will form part of the housing consumer programme which aims to encourage the new homeowners to be conscious about improving their environment through greening their property, keeping it clean and further changing their mind set towards engaging in sustainable environmental practices.”

KWV’s Chief Winemaker Richard Rowe expressed his appreciation for the way in which the community supported this initiative and looks forward to this forming part of the sustainable development of Paarl.

KWV is one of the leading wine and spirits producers in South Africa. Its head office is located in Paarl, in the Western Cape region; one of the country’s top wine producing regions. KWV is known internationally for brands such as Roodeberg, KWV wines & Cathedral Cellar, and is a founder member of the Industry Association for the Responsible Use of Alcohol (ARA).