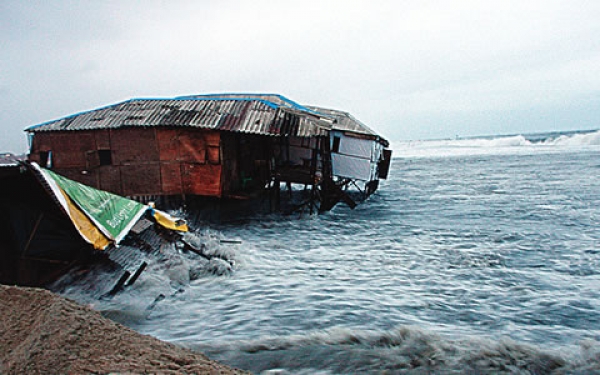 Four people, including a six-year-old girl, have been confirmed dead after the Atlantic Ocean charged into Lagos, Nigeria’s Kuramo beach on Saturday.

With the aid of a boat, the officials of the National Emergency Management Agency (NEMA) recovered the body of the girl, identified as Bisi Kolawole, and two adults, as they floated on the water body, on Sunday morning.

Bisi’s mother and sibling are still missing, according to a source close to the family.

One body was retrieved from the ocean on Saturday. Two bodies are still missing in the aftermath of the surge, according to NEMA, although residents put the figure at around 30.

The Lagos Emergency Management Agency said that the recovered bodies would be deposited at the Lagos State University Teaching Hospital.

More ocean surges are expected before the turn of the year, according to Adesegun Oniru, the Commissioner for Waterfront Infrastructure and Development.

“It (the surge) happens three times a year, not always as bad as what happened within the last four days,” said Mr. Oniru. “It has come down for now, we are expecting another powerful storm in November and that will be the last one for the year. But the chances of more water from the Atlantic going into Kuramo is very slim because what we are gonna do now is to try and push the ocean back and abridge the breaking in the sand,” he continued.

As a fallout of the fatal ocean surge, the Lagos State government, on Saturday, issued an immediate order to the residents to relocate from the beach.

On Sunday morning, the residents frantically evacuated their belongings before the noon deadline given to them to move.

Worn mattresses and battered generators made way for the bulldozer, stationed at the beach’s entrance and awaiting the deadline.

Just before noon, the bulldozer’s giant blade descended on the first shanty, scattering wooden debris into the air.

“All these things are illegal,” Dr. Oke-Osanyintolu shouted over the hum of the bulldozer.

A woman, who lived in one of the shanties, let out a cry.

no time to make a plan

“The government should have made provision. They didn’t give us enough time to move out,” said Abbey Edwards, a security guard who has lived on the beach for half of his life. “It is not safe. When you chase everybody out, the level of crime in the society will increase.”

“The incident that happened, about the people that died, its not as if the ocean came and washed them away. Some people were just trying to rescue those that were struggling to swim,” Mr. Edwards said.

One hour later, the dozens of shanties that usually dot Kuramo beach was reduced to rubble.

The residents said that they felt shortchanged by the government.

“We have lost lives and properties, and now they have come to destroy our homes. After all their promises during the elections,” one of the residents said.