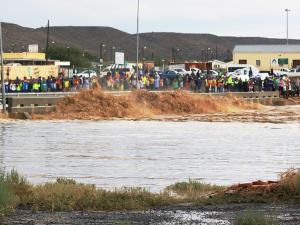 Residents watch floodwater near the Bergsig bridge in Laingsburg. Due to heavy rainfall the Karoo town has experienced its worst flooding since 1981. Photo: Laingsburg Tourism

Laingsburg is again under siege, hit by what some say is the worst flooding since the terrible flood of 33 years ago that wiped out half the buildings in town.

On Wednesday, the N1 was closed for several hours as farms were cut off and crops submerged.

Communication systems were failing amid dramatically rising river levels and some homes had to be evacuated.

A joint operations centre has been set up in the Karoo town and a number of rescue resources, including helicopters, are on standby in case the situation becomes worse.

On Wednesday, Laingsburg residents described to the Cape Times how continuous rain and thunder showers had pummelled the area and how one resident, who had survived the first flood 33 years ago, had to be medically treated after suffering a panic attack.

“It’s just about as bad as it was during the 1981 flood,” said Francis van Wyk, 75, who experienced the first flood and started a museum around the event. “It’s an experience of a lifetime to be going through it again.”

On January 25, 1981, a flood there resulted in 104 people being killed and 185 houses and 23 business premises being destroyed.

On Wednesday, the Buffels, Wilgenhout and Baviaans rivers in the Laingsburg area flooded. Telephone, cellphone and internet connections in Laingsburg were intermittent as a result of the weather and at one stage, part of the N1 highway had been closed due to flooding.

The province’s disaster management chief director, Colin Deiner, said it was expected to rain in Laingsburg until tomorrow, but the amount expected to fall was set to decrease progressively. A spotter aircraft was meant to have flown over the area to assess damages on Wednesday, but Deiner said the weather had been unsuitable for this, though there was concern for some farmers in the area.

Agri Wes-Cape chief executive Carl Opperman said farms below the Floriskraal Dam, which reached a capacity of more than 150 percent, had experienced damage. Those farmers were involved with producing onion and carrot seeds.

Opperman said vineyards had also been affected, as had apricot, peach and pear crops. He said it was too early to determine the extent of the damage.

“We’re battling to get hold of people. There are no communications. Some people are completely cut off,” Opperman said. He said the weather front, that initially hit on Tuesday afternoon, had been “totally unexpected”.

Laingsburg mayor Wilhelm Theron said it was “definitely” the worst flooding since 1981 and the rain had resulted in some damage to his farm in the area. His wife, Annalie Theron, said she had heard that a lucerne farmer about 5km outside of Laingsburg had “lost everything”.

She said a golf course in Laingsburg had been damaged.

Holes number four and five on the golf course had completely washed away.

“We are very scared at the moment. If there’s more rain, we’ll have a problem,” Theron said.

Marisa Vieila, who runs a guest establishment outside of Laingsburg, said she had tried several times to get hold of people in the town, but it appeared phones were not working. She had eventually managed to get hold of a relative who told her it was “raining terribly”, there had been hail and people had been advised to stay in the town as roads could flood.

According to a disaster management statement, other areas affected by the heavy rain included the Breede Valley where some homes were flooded.

In Kannaland, 10 people, five of them children, were rescued from a farm that had been cut off by floodwater. The statement said Department of Water Affairs staff had been deployed across the province to monitor flooded rivers and affected dams.

On Tuesday in Robertson, five homeless people had been trapped under a bridge in rising water during heavy rain. Three were rescued and two washed away. Their bodies were discovered in the Montagu area. The body of a mentally ill man, who had fallen into a river in a separate incident in Robertson, was yet to be found.