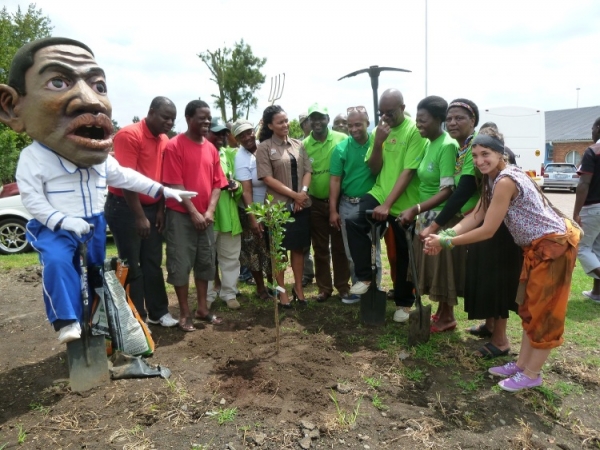 After a beguiling journey through some of South Africa’s remote communities, the Climate Train has reached its final destination in time for the biggest conference SA has ever hosted.

While scores of delegates from around the world descend upon Durban for the 17th Conference of Parties (COP17) to the United Nations Framework Convention on Climate Change (UNFCCC) to negotiate a just, fair and binding agreement on important  climate-change mitigation measures; the Climate Train brings along with it thousands of unheard voices from around South Africa.

The train kicked into high gear yesterday, after an inspiring day at its last stop in Pietermaritzburg Station, before departing for Durban.

Stop the cars and save our wetlands

Though they were unable to fully express themselves and at times seemed overwhelmed by the activity on the platform, learners from the EKuKhanyeni Special Needs School were by no means oblivious to the day’s teachings about climate change.

“I planted my own tree today and I know it will help the Earth. I want people to stop damaging the environment with smoke from their car and take care of our wetlands because it’s hurting our Earth,” said 20 year old MthembuThubelihle, when asked what he had learnt on the Climate Train.

Educator Margaret Bosisothele said she was very impressed with the learner’s impetus.

“This was the first time that they learnt about climate change. I am so impressed that they were able to grasp the concept so quickly. The facilitator’s patience and compassion towards them made all the difference. Everybody deserves to know about the implications of climate change, even the intellectually impaired. Even I as an educator was inspired by the work they presented. I can assure you that it had a big impact on our lives.” 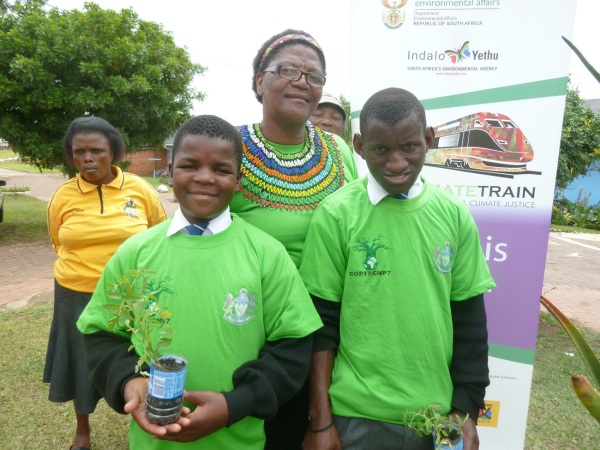 Trees for the future to care for

After participating in the day’s activities at the station, the Climate Train team joined the leaners as well as the Mayor Christopher Ndlela at their school building for a tree planting session.

XimbaSiyabonga (13) expressed his delight and joined Linzi Lewis and WayWord Sun from AMbush Gardening Collective in song, while they were planting the trees.

“I will water the plants everyday and take care of them like I take care of my plants at home. I will not throw bottles and papers on the ground anymore, because it’s causing damage to the Earth. I will remember to keep my school and street clean,” he said while tightly clasping his tomato plant that he had received earlier the day.

We must go beyond COP17

The Mayor, who also got his hands dirty while planting trees, said he was pleased with the community’s receptiveness towards climate change. However, he hopes that it will go beyond COP17.

“We are working closely with the Department of Agriculture, Environmental Affairs and Rural Development as well as the Education Department to educate schools and the community about climate change and the preservation of nature. I believe that change is possible through education and awareness campaigns, starting with the young children. It’s important that everybody hears this message, because we will all be affected if nothing is done to address the problem. 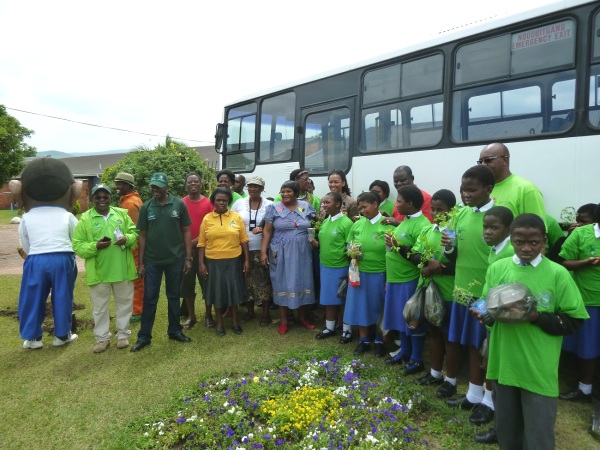 When the train first embarked on its journey, now a month ago, it was for this specific reason – to reach and mobilise remote communities and encourage dialogue with those who would otherwise go unheard.

As the train pulls into the now bustling Durban it is our duty to continue to facilitate that dialogue and share the fears and asperations of all the South Africans we meet along the way.

Thank you to our champion Sonia Koopman

THANK YOU to Sonja Koopman, our trusted journalist who threw herself into this journey with heart and soul. She experienced, she learnt and she grew into a true blooded greeny, albeit one very tired young woman at the end of 4 long and emotional weeks. Sonia managed to capture the hopes and dreams of the voiceless and neglected communities, who were so gracious and grateful to the Climate Train and IndaloYethu and their sponsors for reaching out to them.But the learning went both ways and we were all enriched by the unity of this common cause which touches everyone.

Read the other Climate Train stories too.

Teamwork for earth is the only way forward and this initiative was an excellent example of what can be done with thorough collaboration and a common focus on the future we want to create.