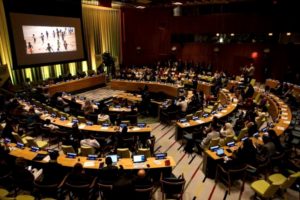 More than two-thirds, about 69%, of people killed in climate-related disasters in the past 50 years were living in 47 of the world’s poorest nations, according to findings released by the group of least developed countries (LDCs) ahead of the United Nations Climate Action Summit, which took place this past weekend.

The LDCs, which make up 13% of the global population, revealed the toll of extreme weather events like droughts, wildfires, floods and landslides between 1970 and 2019 as they launched their 2050 Vision, a blueprint for a climate-resilient future.

“Over one-billion people in our countries live on the frontline of climate change despite doing the least to cause it,” says LDC Group chairperson Sonam P Wangdi, adding that “the current system is failing”.

According to Wangdi, the global response to climate change must rapidly transform to move the world onto a 1.5 °C compatible pathway.

Together with other LDC leaders, Bhutan Prime Minister Dr Lotay Tshering, launched the 2050 Vision, which calls for every country to produce a national strategy to prevent global warming beyond 1.5 °C.

It also outlines measures to be implemented by the LDCs to push for climate resilience and net zero emissions by 2050. This involves channelling 70% of climate funding to drive local level action, holistic climate change planning from the local to the national level and ensuring climate solutions are centred on gender and social justice.

“Our goal is a more effective, more ambitious and more equitable global response to climate change, with no one left behind,” says Wangdi.

The LDCs requested an initial $450-million of investment over ten years in the LDC Initiative for Effective Adaptation and Resilience, to help them deliver the adaptation and resilience work outlined in their vision.

This money will support the countries who are the first to join the drive, such as Bhutan, Ethiopia, The Gambia, Malawi, Tanzania and Uganda.

The LDCs are also championing two other long-term initiatives that will work to support the vision, namely the LDC Renewable Energy and Energy Efficiency Initiative for Sustainable Development and the LDC Universities Consortium on Climate Change.

As more than half of the people living in the LDCs currently do not have access to electricity, the LDC group’s renewable energy initiative will focus on getting 100% sufficient and affordable renewable energy to all LDC citizens by 2030 and 100% electricity from renewable sources by 2050.

Through the climate change consortium, ten founding universities will strengthen the understanding of climate change across the group, design LDC-owned solutions and train the next generation of leaders.

“The least developed countries are being bold and ambitious,” says Wangdi, adding that the LDC has committed to doing “more than its fair share” in the global effort to halt the climate crisis and address its impacts.

“But we cannot do it alone [and] we are asking the international community to commit to supporting our priorities, our initiatives and our vision”.

In 2020, LDCs will come forward with enhanced nationally determined contributions to the Paris Agreement, long-term plans to reach net zero emissions and climate resilience by 2050, and national adaptation plans.