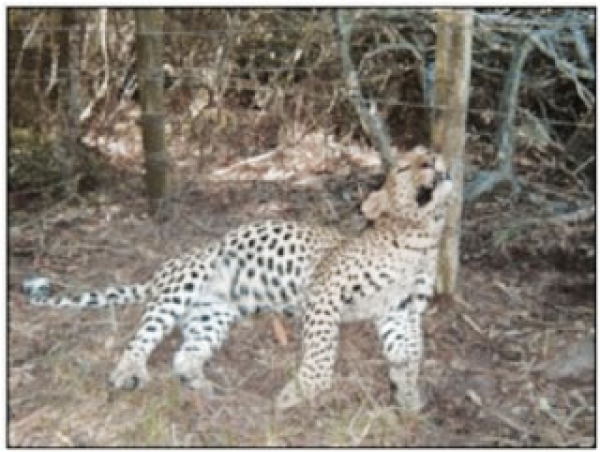 This large territorial male leopard, of 41kg, was killed on the outskirts of Port Elizabeth recently. It was caught around the neck in a cable snare and died of suffocation.

It was likely a dominant male that commanded a territory of larger than 25 000 hectares. The snare was made from a bicycle break cable. The damage to the already stretched genetic stock of the species in the region and the social structures of this population of leopard is incalculable. This leopard’s death is of major concern, as a recently completed Rhodes University study indicated that this cat would have been part of a core population of territorial leopard that lived in a 300 000 ha area in and around the Baviaanskloof Reserve. The study indicated that only about 30 territorial leopards remained in this region (between PE/Uitenhage and Uniondale, Eastern Cape, South Africa).

Over the past 6 years we know of at least 29 killed leopards in this area. It does not require a rocket scientist to realize that this species is under severe stress in this region, and that perhaps we are past the 11th hour for its survival. Such snaring and agricultural production practices such as gin traps, poisons and hunting dogs continue to threaten these species and hundreds of others across the country. We live in a country where we have legislation that makes it legal to set leg hold traps (such as gin traps), to use poisons and even to hunt predators from helicopters. We have many other less charismatic species suffering similar and worse fates, and at far greater rates.

We have production bodies like the National Woolgrowers, the South African Mohair Growers and Red Meat Producers Organization calling for more lethal controls of predators through indiscriminate methods. We as consumers must vote with our wallets and support produce that is not tainted with this abuse of our wildlife! Please support Fair Game Wildlife Friendly produce when it appears on your supermarket shelves later in the year, as it will be produce that does not destroy our wildlife in its production, and it will reward producers that comply with audited and acceptable production standards that are ethically and ecologically acceptable.

The last of these rescues occurred on Sunday 12 July 2009, where 2 leopard cubs were rescued in a cage trap – unusually caught together. This area had been totally cleared of gin traps which had been the method of predator control previously, and which in the past would certainly have resulted in the death of at least one of these cats. The cubs were released and reunited with their mother who was seen with them at the release.