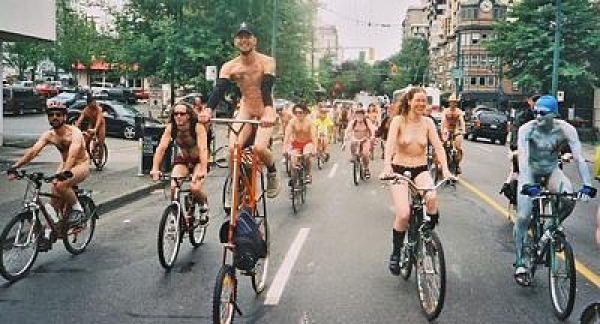 On Saturday 12 March Cape Town is going nuts! This will be a first – the previous attempt in 2007 to join the world in doing so was banned by the authorities. Will we succeed this time? Are we ready to bare all for earth?

Have we had enough lessons from the droughts and floods – and resultant outbreak of diseases – to understand that this message is serious and urgent?

A group of volunteers are organising the Cape Town leg of the global World Naked Bike Ride (WNBR). Their mission is to entertain Capetonians and promote renewable, sustainable energy, cycling as a means of self-powered transport, a healthier body and self-sufficiency.

70 cities are doing it

This global event has happened annually in 70 cities and 20 countries across the world, since this organisation started in 2004.

Groups across the world ride in celebration of a safer, cleaner, more body friendly and positive world. I wonder if our country is ready to join hundreds of naked compatriots in a free, non-sexual, fun bike ride?

How much to bare?

All are welcome! From the shy to the bold. Cyclists, rollerbladers, rollerskaters, skate boarders. All ages, sizes, and colours welcome. Bring your family and your co-workers!

What to wear?  The World Naked Bike Ride dress code is “As Bare As You Dare”…  You decide what you are comfortable with. No one is excluded or discriminated against based on levels of clothing, body-paint, or anything else.

Cyclists paint their bodies and decorate their bikes with messages or beautiful designs to complement their forms. People are being encouraged to be creative and colourful in expressing themselves.

WNBR’s message to the world is one of simplification, human harmony and love. “For a future to exist for tomorrow’s generations, we have to stop wasting the life blood energy of the Earth, stop fighting and killing in the name of consumerist wealth accumulation and learn to love and respect all life on this planet.” So says Conrad Schmidt, founder of The Work Less Party and Artists for Peace and WNBR and organizer for WNBR Vancouver, BC

“It’s time to put a stop to the indecent exposure of people and the planet to cars and the pollution they create. We face automobile traffic with our naked bodies as the best way of defending our dignity and exposing the vulnerability faced by cyclists and pedestrians on our streets as well as the negative consequences we all face due to dependence on oil, and other forms of non-renewable energy.”

Breathe easier. “If you stand in a closed garage with a running car, you will die in a matter of minutes. Hundreds of thousands of cars in our cities create dirty, unhealthy air.” – Go by bicycle

“Unless we change direction, we are likely to end up where we are heading.”