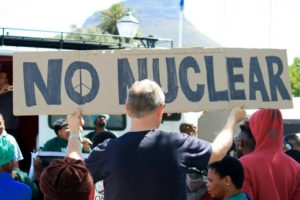 On Monday 26 April, it will be four years since the Western Cape High Court found the government’s R1-trillion nuclear deal and associated energy procurement processes to be “illegal and unconstitutional”. South Africa was spared from a corrupt deal under the Zuma government that would have bankrupted the country. This day also marks 35-years since the Chernobyl nuclear disaster in 1986 (Fukushima followed almost exactly 25-years later, on 11 March 2011). Civil Society is marking the fourth anniversary of the court case win as an important historic moment in our fight against corruption and state capture, while warning that the government seems to be once again set on building unnecessary and unaffordable nuclear energy.

According to Southern African Faith Communities’ Environment Institute (SAFCEI) Executive Director Francesca de Gasparis, “It is concerning that on the fourth anniversary of the ruling against the corrupt nuclear deal, the SA government has started to again pursue nuclear energy ambitions. South Africans cannot afford nuclear energy that will further inflate our electricity bills and create more toxic waste that cannot be effectively contained. If the government is serious about President Ramaphosa’s statement last Thursday at the climate summit, then as much as possible of our energy planning and resourcing needs to go into renewable energy sources.”

“Despite requesting information from government on their plans for nuclear energy, civil society are not being informed about the current situation at Koeberg, risks associated with nuclear or future plans related to new nuclear procurement” says de Gasparis.

She says, “According to the International Atomic Energy Agency (IAEA), Chernobyl was the result of human error when “safety measures were ignored.” Not very comforting, when the State Capture Commission has spent a considerable amount of time investigating Eskom and other actors in relation to energy governance over the past few months. “

Nuclear power plants can pose a grave risk to people’s health, safety and livelihoods. Following the accident at Chernobyl, the IAEA also estimates that at least 1800 children – who were between 0 and 14 years of age when the accident occurred – were affected with thyroid cancer. 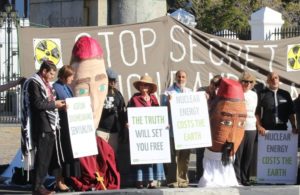 “The IAEA also estimates that approximately two million people had to be relocated at Chernobyl after the accident, with basically no-one living within the 30 km exclusion zone around the plant. These figures suggest that the current 16 km safety zone – the area covered in emergency planning – is entirely insufficient. Cape Town’s wind is infamous. What will happen to communities situated downwind of the plant? In terms of Koeberg, if an accident happened, it could impact nearly a third of all the people in the Western Cape who would need to find new homes and restart their lives somewhere else. Furthermore, many Capetonians will not realise that insurance companies may not cover loss as a result of a nuclear accident,” adds de Gasparis.

“This is why transparency, good governance and public participation and preparedness on these issues is so important. As we also celebrate our Freedom Day this week, the right to be involved in decisions that affect us is enshrined in the Constitution, which should be the cornerstone of our democracy,” concludes de Gasparis.

Ulrich Steenkamp from Earthlife Africa Johannesburg says, “A big concern is the growing amount of high-level radioactive waste temporarily stored on-site at Koeberg. There is no successful permanent solution – anywhere in the world – to safely dispose of this highly-toxic waste, which stays dangerous and a threat to human and environmental health, for thousands of years. 26 April is particularly significant for South Africa, as we still face a nuclear lobby that tries to convince us that this failed technology is a must, even though the evidence against nuclear continues to mount.”

Andre Naidoo – Indigene Traditional Khoi & San from Ocean View says, “In my community, not many people know what Koeberg is, what it does, nor the safety risk it poses. Many do not know what impacts the plant could have. It is unclear where exactly the 16km evacuation zone is. Most residents don’t even know they are living on such a ‘ landmine.’ It is frightening to imagine. Many South Africans living in the Western and Northern Cape are at a major disadvantage, when it comes to knowledge and information about the nuclear plant. Surely, considering what happened at Chernobyl and Fukushima, we should be much better informed?”

According to the Unitarian Lay Minister Celeste Esau from Manenberg, “We need more information about Koeberg. We just don’t have enough information about the nuclear plant. Some of the main fears about Koeberg centre around the costs involved in extending the lifespan and expanding the plant, as well as safety. Many South Africans are just scraping by on only basic necessities. This additional cost will affect us. Most importantly people need to know this imminent threat is right on our doorstep. People need to be made aware of what the fallout area is.

What stands out for me when thinking about Chernobyl, is that it destroyed an entire society. This nuclear disaster did not only affect the area where the plant is situated but it affected the entire region and beyond. So, when you think about it, a disaster at Koeberg will not only be a Koeberg thing. It will affect most of the Western Cape, and possibly parts of the Northern Cape. Even if you know nothing about nuclear, this affects you too. 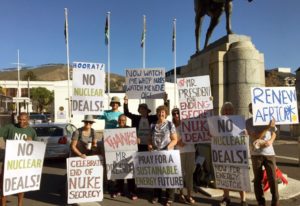 It is very difficult to get accurate information about Koeberg and it is just as complicated figuring out what the truth is. We need to make sure to speak with clarity and simplicity with the best intention for the highest good. But, on the whole, the way Eskom operates is questionable. It is disappointing for me to see that Eskom seems to discourage sustainable energy options, with people that utilise hybrid systems seem to be penalised. Makes no sense, especially when you consider the recent tariff hikes.”

Salieg Isaacs – Muslim from Manenberg says, “People do not know enough about Koeberg or nuclear energy. Our children should be learning more about this at school and they should be encouraged to think about the issues critically, and then to consider the alternatives. While I would like to talk more about these issues in our mosques and churches, our communities are more focused on immediate issues such as crime and violence. Our people need more information about nuclear energy. The lack of information shared, is a very real problem. I want to use my skills as a teacher to get the young people thinking about solutions and not accepting everything that comes to them.”

Zelda Ann Hintsa – Catholic from Athlone says, “People do not have enough information about Koeberg and what it does, nor do they know enough about nuclear energy in general. Information is not going out fast enough. There needs to be education about nuclear energy and the potential hazards involved, and if there is a major accident what is the effect it will have in Cape Town? What will people do? Another thing we need to connect the dots on is exactly how much water does Koeberg use per day? That type of information also needs to be easily accessible.

In our communities, people are struggling as a result of the electricity hikes. They could barely cope last year, and now they are scared they won’t cope at all. More people are using paraffin stoves and open flames to avoid electricity, and more people are burning more candles, all of which could cause more fire incidents in the community. It is not fair that so many South Africans have to choose between rather having the lights on or being able to cook a meal.”

Lydia Petersen from Mitchells Plain says, “Following a survey I did with approximately 250 people, it became clear that people do not know anything about Koeberg. While many have heard of it, they have no idea what its purpose is. They know nothing about nuclear, or what role it plays in our energy mix. In my survey, some of the key responses were around why something that is so dangerous is allowed to generate electricity? People want to know more.

Disadvantaged communities already struggle to survive. The pandemic and now also the latest price hikes have only made the situation worse. And we get no grace. For years the City deducts any arrears via your electricity purchases.

As of late, the Free Basic Electricity (FBE) was stopped in many households, without explanation. This is a human rights issue because indigent households cannot cope. Energy has become a luxury that only some can afford and enjoy. The energy poverty landscape is in a dramatic downward spiral. I believe that people need to be educated about tariffs, especially what we pay for electricity, the step tariff and what we can do to save energy.”

Iqram Hendricks – Muslim from Thornton says that people are ignorant about the ins and outs of Koeberg, with many believing that its contribution to electricity is huge in power delivery. But, did you know that the Koeberg nuclear only contributes around 3% of the country’s electricity?

Hendricks says, “Many South Africans do not know the dangers of nuclear, nor do we know the true condition of the containment structure. And, since the South African government has proven itself (over and over again) as corrupt, one has to question the integrity of maintenance and other expenses. As we continue to bear witness of the effects of nuclear disasters like Chernobyl and Fukushima, on top of the unresolved issues with nuclear waste disposal – cost involved should also be focus points. If the Chernobyl disaster has taught us anything, it is that there can be no shortcuts with nuclear!

And yet, electricity tariffs continue to increase, with people having to get creative with finding ways to bring household costs down, as well as reduce the load on the grid.”