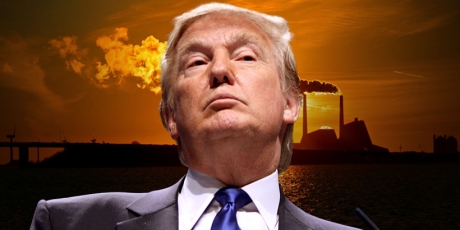 In 67 days, President Trump could go to war with climate action. But governments are at their annual climate summit right now. If we act fast, we could get them to lock in progress before he can destroy everything we worked for.

Germany, China, India, Brazil, the climate vulnerable countries, and others are reasserting their commitment to the Paris climate deal. But if enough of us call for it we could get them to urgently lock in the way to zero climate pollution, demand the US keeps its Paris promise, and commit to advance faster towards climate solutions that Trump won’t be able to stop.

Let’s ask them to make an unequivocal statement for climate action, regardless of what Trump does. Avaaz has staff inside the summit – let’s make this the biggest public call ever to show we will fight like hell for everything we love – it’ll be delivered directly to governments.

Trump has called climate change a hoax, dismissed the Paris agreement, and just gave a climate denier with ties to Big Oil the job of determining his environmental policy in the next few months!

But over 100 countries have signed up and Paris is already in force. Now the world’s most vulnerable countries are leading the charge for urgent climate action. Yesterday, Germany announced a bold new plan to radically cut carbon and, crucially, China is shutting down coal and breaking records on renewable energy. India too.

Trump could pull the US out of the UN climate convention when he comes to power – and as the world’s largest per capita emitter, that will have huge impact not only on the people of the US, but on all of us. But such a withdrawal is a bureaucratic nightmare that could take years. If enough of us join together now with a roar of NO! we can find ways to stop it, and ensure the rest of the world speeds up if the US slows down.

We simply can’t let this ignorant billionaire destroy the only path to save our planet. Let’s go all out now to keep the world on track when Trump takes office.

Let’s get our leaders to recommit to our planet.

Together, we helped make the landmark Paris climate agreement possible. We marched, donated, signed, and called. In the end, we helped push good leaders to be champions and made it difficult for anyone trying to block progress. Paris was always a starting point. We still have a long way to go to save everything we love from climate change. But if we lose it now, this shot at global cooperation is gone. This week we must act.