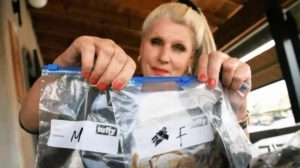 A novel new study using hair snipped from customers at barber shops across Gauteng has found how residents living in and near gold mining areas are exposed to elevated environmental levels of uranium, which eventually finds its way into their bodies.

The study, Human Exposure to Uranium in South African Gold Mining Areas Using Barber-Based Hair Sampling, aimed to uncover whether uranium enters the body and reaches elevated levels that can be detected in hair samples.

It was conducted by scientists from the International Agency for Research on Cancer (IARC), an arm of the World Health Organisation that probes the causes of cancer, together with researchers from Germany and South Africa.

Through a pioneering pilot study, the IARC is investigating whether uranium pollution might be linked to the development of cancers in gold mining areas on the Witwatersrand, which has 20 times more uranium dumps than the US and Canada combined.

“The main strengths of this study include the first direct human exposure measurement in the area concerned, the large sample, and the protocol that allowed sampling of also the most deprived communities,” write the authors of the paper, published in the journal PLoS One last week.