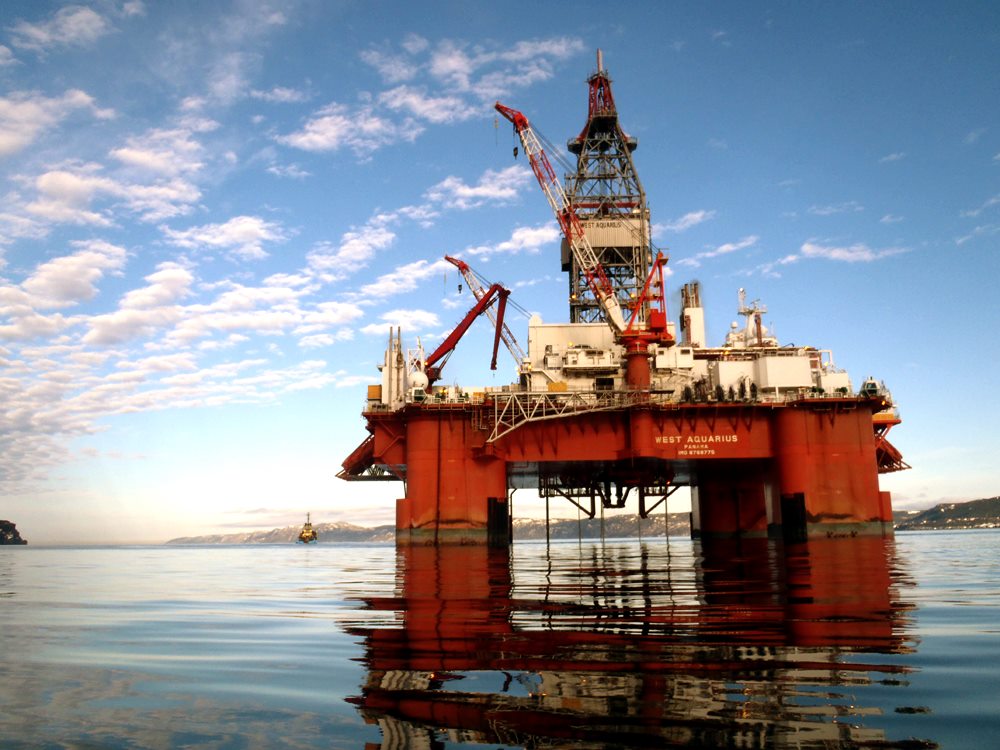 When I learned about the oil giant BP’s plan to drill off the coast of my home, my heart felt like it dropped out of my chest. As I write this the West Aquarius rig is well on its way to the Nova Scotian Shelf. By the time this is published, it might have already arrived. My thoughts went immediately to those oil sullied shorelines in the Gulf of Mexico, and to the fishermen there whose families and livelihoods were shattered to pieces, and the countless species of fish, mammals and marine birds suffocated in the earth’s primordial blood.

BP forever damaged that region and not only in an environmental way. The scars, the untraceable diseases, the suicides and domestic conflicts induced by despair, the financial ruin, displacement and alienation persist to this day. 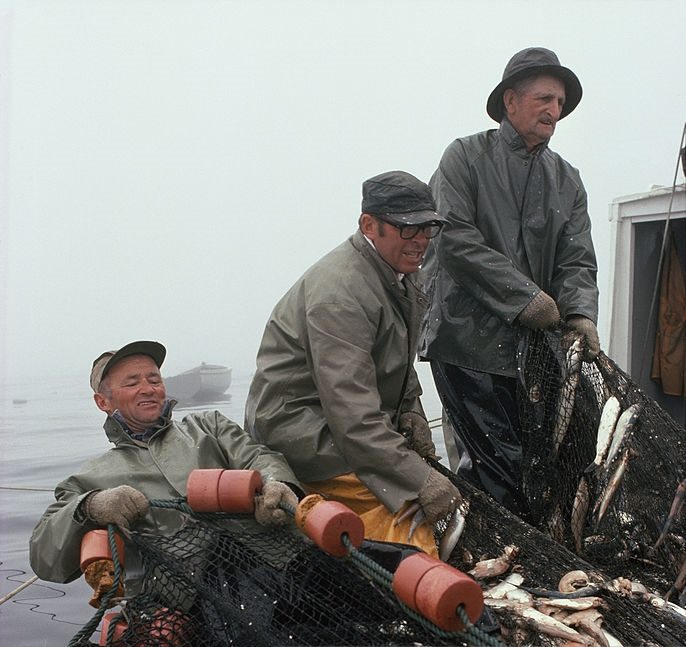 Three of my fishermen relatives, including my late uncle in the center, haul in mackerel and herring at Big Tancook Island, Nova Scotia in 1975. Image: Gordon Gahan / Getty

Many of my ancestors were fishermen here in Nova Scotia for generations. They negotiated the treacherous storms endemic to the North Atlantic and many of them perished in the icy waters which surround this rocky, unforgiving peninsula. I’ve several relatives whose livelihoods are still dependent upon the ocean. But it is more than just a job. The sea is entwined with one’s heart here. It informs the culture, the food, the language. The life of this province cannot be separated from it.

Until settlers stole their ancestral lands, Mi’kmaq, the region’s First People, lived in balance and harmony with this sea for thousands of years, carefully studying its character and respecting its surly and churlish mood swings. They still ply the currents of the deep cold inlets and hidden coves. 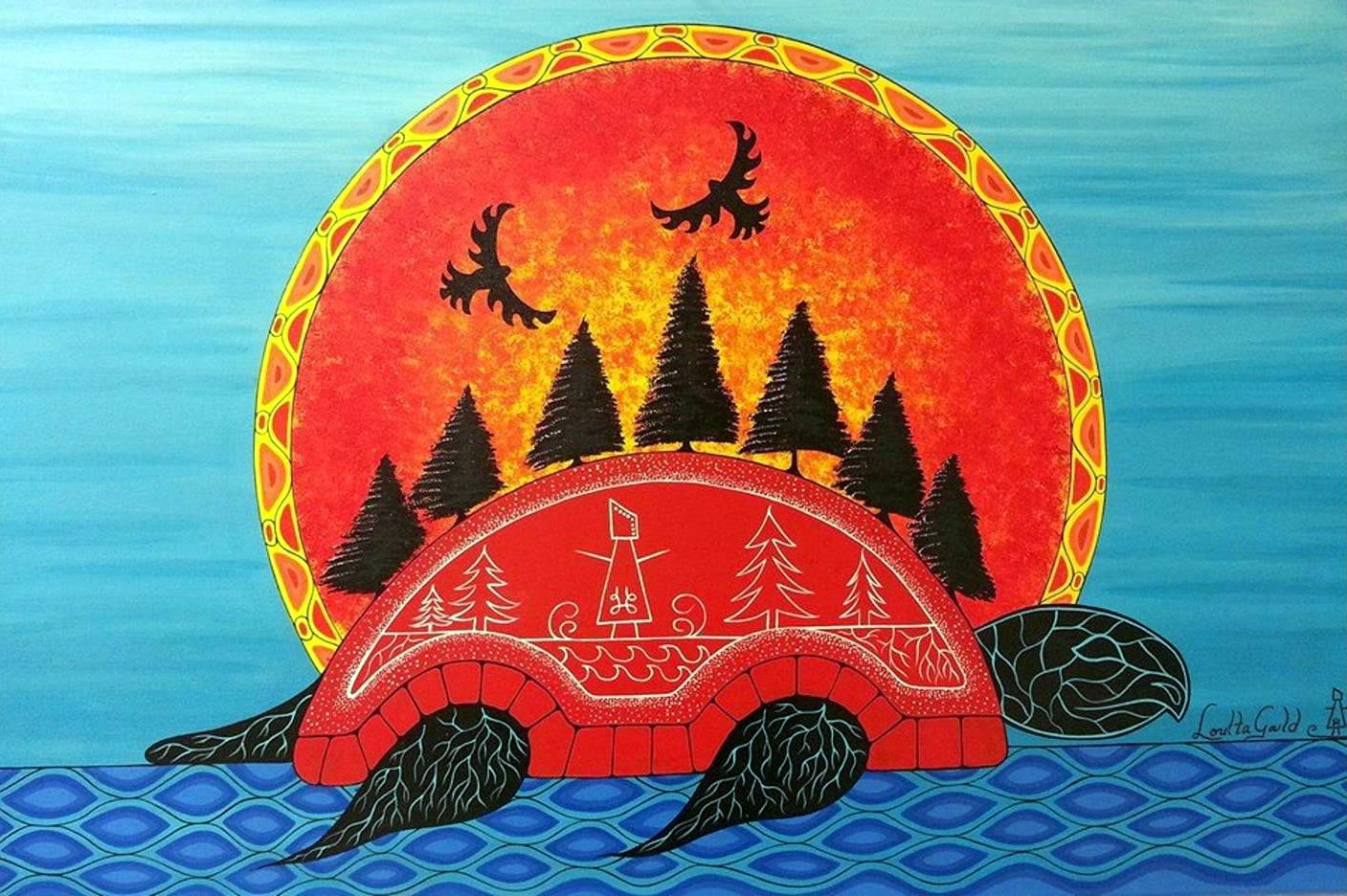 Nova Scotia’s rugged and breathtaking coastline, often blanketed in fog and punctuated by ancient, craggy pines, has been sang about at cèilidhs (Celtic social gatherings) for centuries. The provincial license plates proudly bares the logo “Canada’s Ocean Playground.” Indeed, the ocean remains one of the chief economic engines of the region generating billions of dollars annually. Above all of this is the biodiversity this place is graced with. But none of this, no wealth of culture, nor livelihoods, or biodiversity, or even physical beauty is of concern when a region catches the covetous eye of Big Oil.

In the case of Nova Scotia, a sparsely populated province with an abundance of natural resources, BP saw an opportunity. And a neoliberal government beholden to the interests of Big Oil paved the way for exploitation. The drilling will be in over stormy waters that are 3000 metres deep (roughly 10,000 feet) and is in one of the primary spawning areas for fish like haddock. 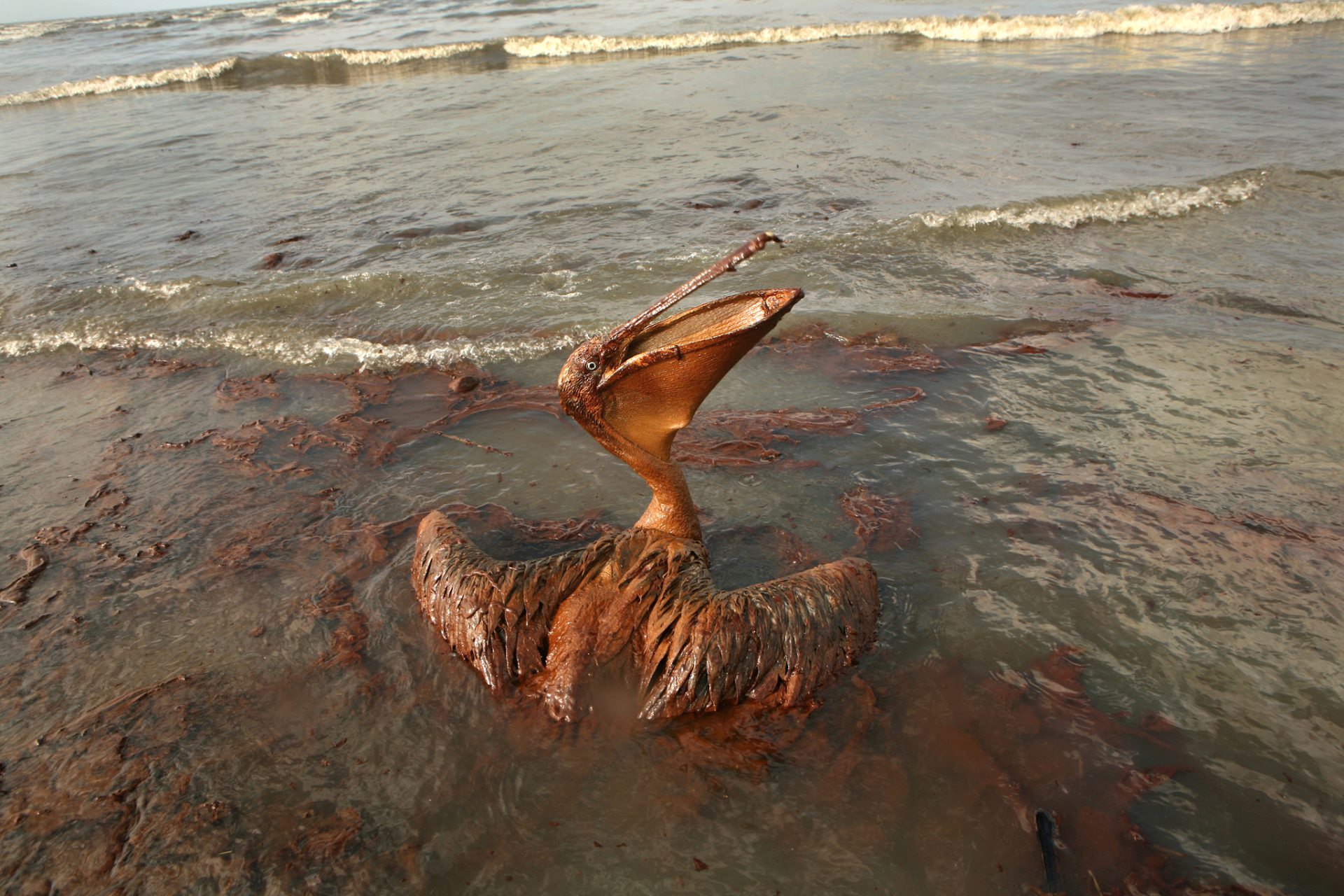 A pelican suffocates in the oil spilled by BP in the Gulf of Mexico in 2010. Image: Orlando Sentinel.

To add insult to this great injury: if there is a blow out the primary strategy for dealing with it will be the infamous toxic dispersant corexit, used in the BP spill in the Gulf of Mexico in 2010. And it would take at least two weeks for the company to transport a “capping stack” from Norway under normal circumstances, not taking into account the strong currents and wild storms endemic to the North Atlantic. If and when such a cap arrived there is absolutely no guarantee that such an intervention would even be workable in these deep and rough waters. After all, nothing like this has ever been attempted here. Nothing.

In a world where the fossil fuel industry inhabits the precincts of policy making and regulation, no place is off the table for exploration and exploitation. And history has proven that Big Oil enjoys near impunity for its crimes. In the Niger Delta, one of the most biodiverse places on the planet, Royal Dutch Shell has spilled an estimated 1.5 million tons of oil into the rich ecosystem while simultaneously assisting the Nigerian military in the violent suppression of protest from the indigenous communities of the Ogoni. 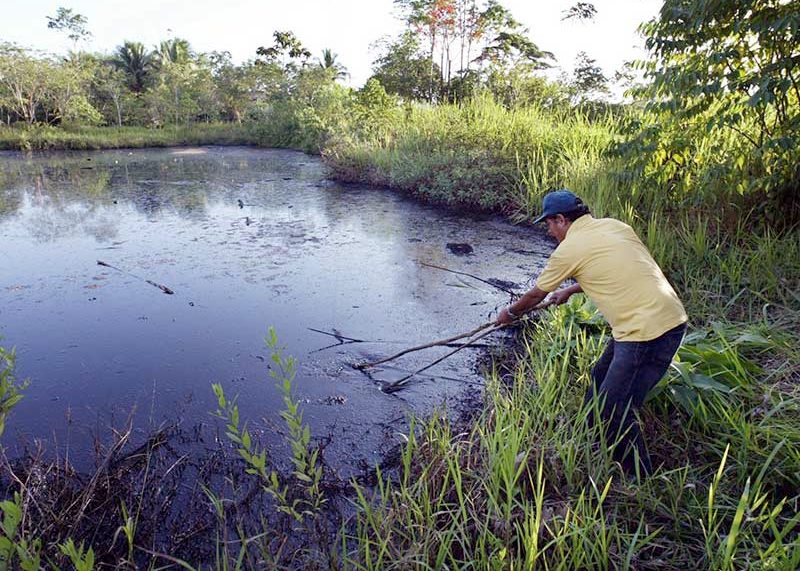 In the Ecuadoran Amazon, Chevron Texaco deliberately fouled huge swaths of the rain forest with at least 17 million gallons of oil and waste, and poisoned scores of indigenous communities with carcinogenic toxins. In the Alberta Tar Sands the fossil fuel industry has left a scar that is literally visible from space. There is no place on the planet that Big Oil will not sacrifice or future it will not jeopardize for money. No society or ecosystem will be spared its plunder for profit, large or small.

The fossil fuel industry is the most profitable business the world has ever known and today it is accountable to virtually no one. Its executives sit atop a virtual Lazy Susan, which glides them seamlessly and effortlessly from boardrooms to the halls of legislature and back. It fuels conflicts, spurs wars, and funds massively coordinated and aggressive campaigns of disinformation against climate change scientists and those who dissent. And in the end we are all being held hostage to its existential madness. It is the greatest tyranny humanity has ever known, to be deprived of a living earth for the avarice and shortsighted sake of a privileged few. 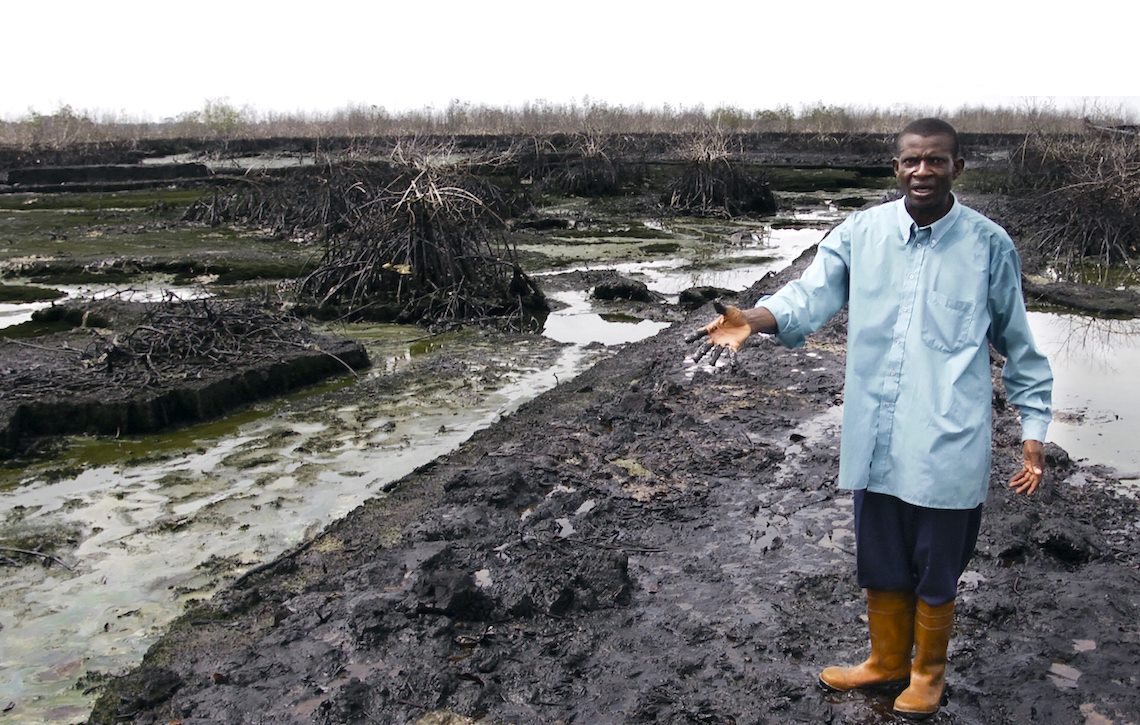 Pastor Christian Lekoya Kpandei used to be a fish farmer in Bodo, Nigeria. The Shell oil spill of 2008 destroyed his fish farm, which provided a living for about thirty families. Image: Amnesty International / AI Netherlands

I have no happy ending to this story as it is written today. After countless “spills, incidents, and accidents” Nova Scotia may become just one more open wound this industry has inflicted on the living flesh of the earth. They will extract what they can and when they pollute they will do so with impunity. The Mi’kmaq and rural, working people will suffer the worst, as will countless species of marine birds, fish and mammals.

Even in the absence of any particular “incident”with the West Aquarius rig, our fragile biosphere will lunge even further toward mass extinction thanks to the cumulative impact of industry’s rapacious extraction and reckless pollution. It will mean death by a thousand cuts. Or in this case, perhaps, a thousand climate change fueled catastrophes. The sea, as Rachel Carson said, will continue. Life, on the other hand, may not.

Nova Scotians will take on BP and Shell and Chevron, and every manifestation of this future killing behemoth, building on the strength and courage of everyone else who has been mercilessly punished by this industry’s greed driven recklessness. Sadly, that list is growing longer by the day.