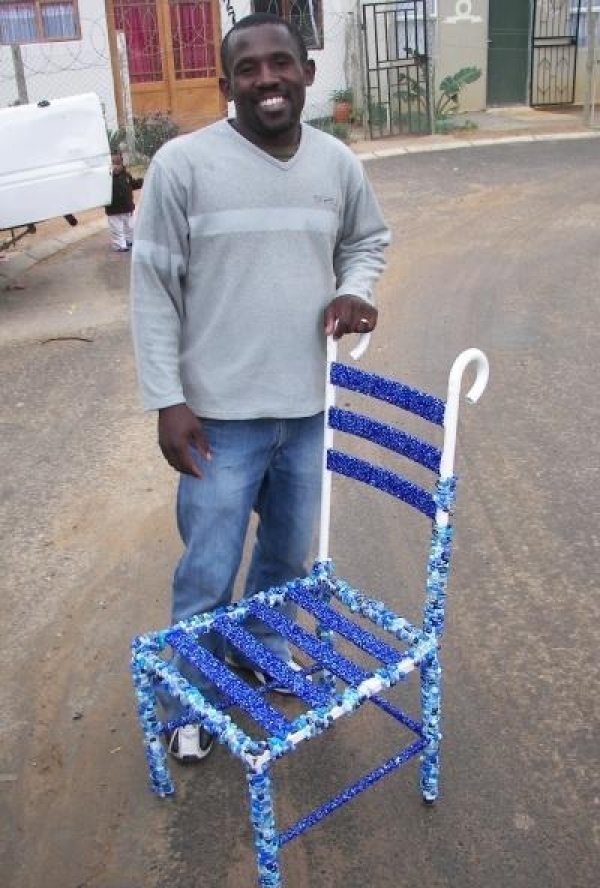 I know the man only as Jerry, yet I trust him enough to take me deep into Kayamandi, where he lives in a small house with three tiny rooms. I am reminded that I’m a child from the bushveld, a tourist looking around in awe at a world that I don’t get exposed to enough. Around every corner I see something new and I absorb it metre for metre.

‘Jerry I don’t want to sound ignorant, but please don’t take me anywhere that they’ll steal my boss’s car,’ I say jokingly.

Jerry laughs and says I shouldn’t worry so much. After a few twists and turns on the brown waste-covered road I am somehow more at ease.

I arrive at his home and learn that he has to pay R1600 monthly rent. Way overpriced!

‘It’s because I’m Zimbabwean,’ he says.

‘My name is Jerry McWire,’ he says, ‘because I used to make a living from wires.’

‘I’ve been making arts and crafts from beads and wires in Zimbabwe since high school. Then I started helping a friend make lamp shades from plastic milk bottles.’ 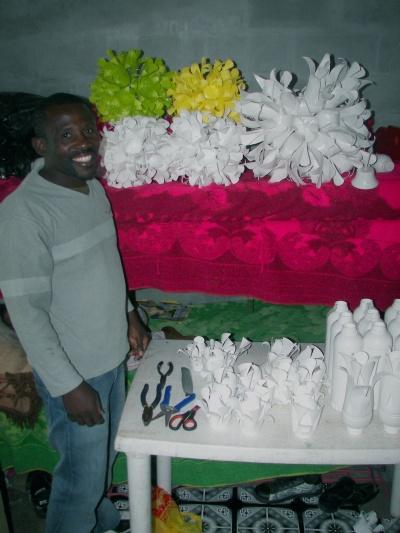 According to Jerry the plastic milk bottles in South Africa are too soft, so when he moved here he started using firmer bleach (Jik) bottles to make the shades.

Something valuable also cleaning the environment

‘At first I tried selling beads and wire ornaments in South Africa, but I soon realised everyone sells them here. Then I remembered about the lamp shades. It feels good to make something valuable that is also cleaning up the environment.’

The smaller shades Jerry makes by reusing plastic cups. They are fun and colourful – perfect for children’s bedrooms. Jerry encourages his clients to use LED light bulbs if they buy his lamp shades, not only because it will prolong the product’s life, but also because it’s better for the environment. 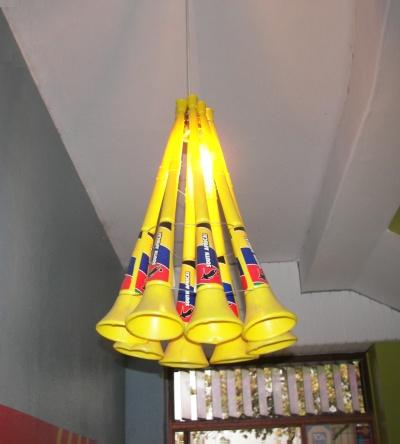 The lampshades are sold locally, because some of them are too bulky to export, even though tourists show the most interest. A small shade is R250, a medium one R400 and a big one R650. Jerry has also made very unique lampshades using discarded vuvuzelas and putting light bulbs inside. ‘During the World Cup I had requests to make them and now South Africans love them,’ he says.

The more interest, the more jobs

Jerry has been teaching others in his community to manufacture these shades. The larger the interest in them, the more unemployed people he gets to help. He hopes to set an example for them that working hard pays off. He wants to grow his business in any way possible so he can build up his community and provide them with more jobs.

His lampshades are sold at the Hathersage Market in Somerset West or the Stellenbosch Farmer’s Market on Saturdays. If you’d like him to make you any types of arts and crafts or to buy one of his impressive shades, please contact Jerry at 0835711665.