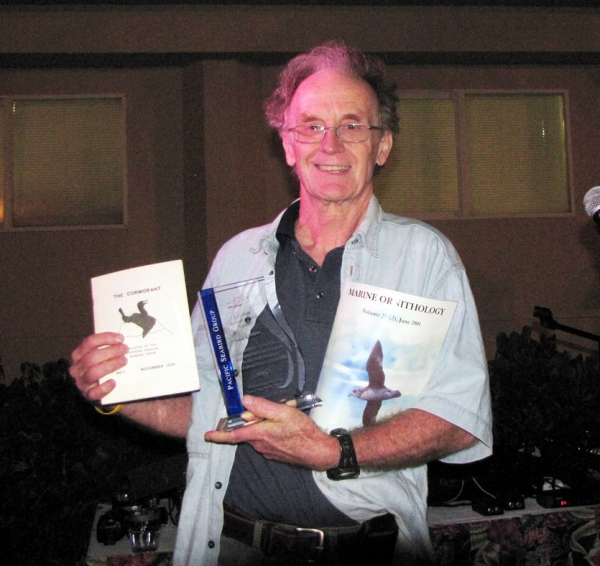 John Cooper, a research associate of the DST-NRF Centre of Excellence for Invasion Biology (CIB) at Stellenbosch University, was recently honoured for his career of nearly four decades dedicated to seabird conservation research. The Pacific Seabird Group (PSG) awarded him with a Lifetime Achievement Award at its 39th Annual Meeting in Oahu, Hawaii earlier this month.

The PSG Lifetime Achievement Award recognizes a seabird researcher, educator, or conservationist who has made significant, long-term contributions to seabird science, conservation and education in the Pacific Ocean or the world.

While attending the PSG’s meeting, Cooper presented one of the three invited plenary lectures with the title Conservation and restoration of islands in the Southern Ocean.

Cooper’s contributions to seabird research are exceptional. He retired from the University of Cape Town in 2008 after a 35-year career conducting research on seabird biology and conservation, with a special emphasis on islands in the Southern Ocean.

In addition to his substantial primary research on the Pacific Seabird Group from November 1997 to March 2001, he initiated and coordinated the Seabird Conservation Programme of Birdlife International.

He serves on the Management Committee of the Prince Edward Islands Special Nature Reserve (South Africa) and on the Tristan da Cunha Biodiversity Advisory Group (T-BAG). He is also an honorary conservation officer of the government of Tristan da Cunha.

Cooper is forum editor of the international journal, Marine Ornithology, which he founded in 1976. Currently he is the honorary information officer for the Agreement on the Conservation of Albatrosses and Petrels (ACAP), of whose advisory committee he is the past vice-chairman.

He is the author of numerous publications and books relating to birdlife. In 2010 Mr Cooper was a co-author of a glossy 176-page coffee table book, Marion and Prince Edward – Africa’s southern islands.