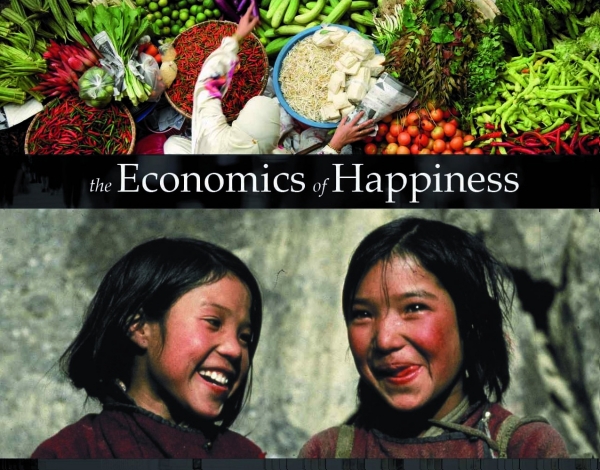 We know what makes us happy—but too often our economic decisions stand in the way. Here’s Helena Norberg-Hodge, director of the Economics of Happiness and winner of the 2012 Goi Peace Award, on how to change all that.

“The number of Americans who say, ‘Yes, I’m very happy with my life’ peaks in 1956 and goes slowly but steadily downhill ever since.”

That’s environmentalist and author Bill McKibben, speaking in the new documentary The Economics of Happiness. While our Gross Domestic Product has increased quite a bit since the ’50s, our happiness hasn’t (though we have seen hefty increases in the size of our landfills, waistlines, and credit card debt).

Our global economy is effective at many things—moving huge quantities of goods across great distances, for example, or turning mortgages into profits. What it’s not so good at is determining whether these activities are worthwhile when it comes to improving the lives of the people who live and work within the economy (not to mention preserving the natural systems on which the whole shebang depends). In many cases, economic policies that increase trade or production actually decrease well-being for millions, even billions, of people.

That’s the reality that’s leading more people (and, increasingly, governments, from Bhutan and Bolivia to Britain and France) to ask a very simple question: What’s the economy for, anyway? Do the rules and policies we create to govern the flow of money and goods exist to create ever more money and goods, or to improve our lives? And if we decide we’d like to prioritize the latter, how do we rewrite the rules to do that?

The Economics of Happiness tackles these questions on six continents, examining ways our economic decisions promote, and diminish, human happiness. I spoke with Helena Norberg-Hodge, the film’s director and the founder of the International Society for Ecology and Culture, about what her research tells us about the relationship between economics and happiness.

Brooke Jarvis: When did you start thinking about the connection between economics and happiness?

Helena Norberg-Hodge: Thirty-five years ago, I had the great privilege of living and working in Ladakh, or Little Tibet. People there seemed happier than any people I had ever met. To me, this seemed to come from a self-esteem so high that it was almost as though the self wasn’t an issue. Even among young people, there wasn’t a need to show off, to act “cool.” I remember being impressed that a thirteen-year-old boy wouldn’t feel embarrassed to coo over a little baby or to hold hands with his grandmother.

But as Western-style development came to Ladakh, so did the message that the people there were primitive and backward. They were suddenly comparing themselves to romanticized, glamorized role models in the media—images of perfection and wealth that no one can compete with. You began to see young people using dangerous chemicals to lighten their skin. In Ladakh, there is now a suicide a month, mainly among young people. Not that long ago, suicide was basically unknown—there would have been one in a lifetime. That’s a really, really clear indicator that something is really wrong—and the dominant economic model is what had changed.

In countries around the world, in fact, there is an epidemic of depression and suicides and eating disorders. With this film, we’re trying to show that, when you look at the big picture, these social issues—as well as our environmental problems—are linked to an economic system that promotes endless consumerism. Fundamental to that system are trade policies that promote the expansion of giant multinational corporations.

Jarvis: What impact do economic policies designed to promote pure economic growth have on happiness?

Norberg-Hodge: Among other things, it’s important for us to understand that growth—what we currently measure and promote—is destroying rural livelihoods and rural communities. You can see the end result in industrialized countries, where only something like 2 percent of the population is left on the land. This has meant the death and destruction of hundreds of thousands, millions probably, of smaller towns and villages.

We need a balance between urban and rural—we need diversity, the ability for people to choose. It’s difficult now, thanks to what our economic policies promote, for small farmers to earn respect or a decent livelihood. Many migrate to cities because they have little choice, not because it’s a superior life. At the moment, the global economy is set on this track of mass urbanization. Something like 60 million people live in Beijing, if you count the satellite towns. It’s an absolute disaster—socially as well as environmentally.

And all the time, more people are being pulled into big cities. People are made to feel that life as a farmer and life on the land is inferior, primitive, backward, anachronistic. The future is urban; their children must find a job in the city.

Looking at this trend from a global point of view, it’s clear we need to urgently do what we can to support rural livelihoods and the survival of healthy farming. Localization is the way to do that.

In some places, this movement is already starting to happen. There is a new young farmers’ movement that’s very inspirational. In the local food economies growing around places like Seattle and San Francisco, farmers are making enough money, they’re getting enough respect. Their work is small-scale, diversified, enjoyable—they’re not part of a machine or a monoculture.

There is a structural link between localized economies and diversification on the land. And this in turn means higher productivity—smaller farms with higher levels of biodiversity actually produce more food per acre of land. They also provide more jobs instead of relying on large machines and lots of fossil fuels.

Rural livelihoods can be enjoyable and highly respected. This fact—that there are two very different possible forms of food production—urgently needs to be communicated, especially in the less industrialized nations.

Jarvis: Much of the conversation around economics and happiness, including around the various new initiatives to track happiness as an economic indicator, has focused on tracking material well-being—for example, the distribution of income, or access to health care. Your focus seems to be more on the impact of economics on things like self-worth and interpersonal connections.

Norberg-Hodge: Right now happiness is very high on the agenda. I think it’s because the unhappiness is becoming so evident.

I’ve spoken with some journalists who ask, “Well, how do we know what happiness is? Who are you to say what it is that constitutes happiness?” It’s true that there are many definitions, but I’m most interested in the abundant research that says that people all around the world, more than anything, need to feel loved, appreciated, seen, and heard—especially as children growing up. They need to be nurtured in order to become nurturing, loving and happy people. That is what localization is all about. That’s why localization is the economics of happiness—because it’s about restoring that human connection and care. In addition to research, consider our spiritual traditions. Virtually all of them have a clear message that love is the path to peace and to happiness.

The “global to local” way of thinking about economics brings together the profoundly practical, in terms of our livelihoods and ecosystems, with our spiritual and psychological needs. All of these dimensions are pointing in the same direction, towards localizing as the economics of happiness.

Jarvis: What is your opinion of the recent interest in alternative economic indicators—governments that are using well-being rather than economic growth to gauge the success of their policies?

Norberg-Hodge: That’s an important trend. We need to recognize that the current indicators are absolutely crazy, that they’re contributing to this blind race in the wrong direction.

There’s plenty of evidence that we’re prioritizing pure economic growth at the expense of common sense. One of the scenes in the documentary shows how apples are flown from England to South Africa to be washed and waxed and put in plastic bags—and then flown back. In Mongolia I have been served water that had been bottled by Coca Cola in Hong Kong. In Nairobi, I found that butter from Holland cost half as much as Kenyan butter. In Devon, UK, New Zealand butter cost a third of the price of butter from the farm down the road. I started an informal study of butter prices as I traveled around the world, and found that literally everywhere I went, butter from many thousands of miles away cost less than butter from a few miles away.

Almost everywhere, too, I found a misconception that this was happening because producers on the other side of the world were more efficient. But when you see it from a global point of view, the picture looks very different. Since this is happening worldwide it’s not actually to do with efficiency; it’s to do with global monopolies and trade policy.

We need to think much more carefully about what an economy is for and how we can tell when it’s functioning well. New economic indicators are important, but they have to be part of a commitment to a broader shift in economic policy—a shift in what we regulate at the local as well as the international level, as well as in what we tax and what we subsidize.

Norberg-Hodge: It can’t happen if we continue to maintain a scale of economic activity where neither the producer nor the consumer nor the CEO nor the investor can actually see what’s going on—in other words, if we continue to operate in such a vast global arena, it’s virtually impossible to see the consequences of our actions and impossible to measure them in any sort of meaningful way.

We need to be shortening distances and creating more accountable and visible arenas, basically decentralizing and localizing our economies. But because of deregulation of both trade and finance at the global level, businesses are being pressured to grow faster and faster, to become more global, to increase in scale at any cost. The idea is either you go big and global or you die. But for our real needs, relatively small businesses closer to home can actually provide for our needs more efficiently and sustainably.

Jarvis: And by “what we need,” of course, you’re referring to more than material needs.

Norberg-Hodge: Yes. Because people so need to be seen and heard, respected and cared for by one another, rebuilding community at the local level can dramatically restore human well-being.

When people reach out to each other to start rebuilding the local economy—for example through the local food movement or local business alliances—we see a reduction in polarization, across political divides as well as across ethnic ones. At the same time, localization helps people reconnect to the natural world around them, something which fulfills another deep human need.

These are the things that really restore human happiness, and they come through localization.

PS. We at the Green Times have 5 copies of this ingenious film to lend out to our readers. Send us an email if you’d like to borrow and view it for two weeks. This way, we hope to spread these copies around much further as this film needs to be seen by as many people as possible.