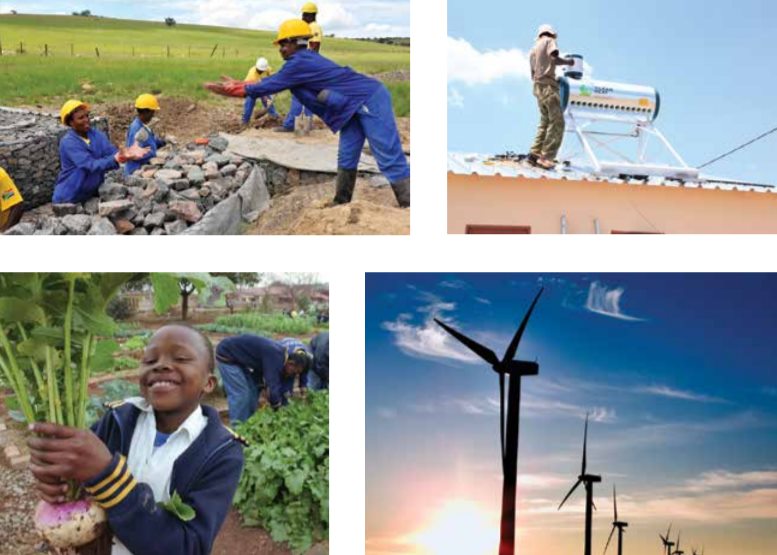 The present-day SA government is committed to addressing climate change through a just transition towards an inclusive, environmentally sustainable and climate-resilient economy. The transition to a greener economy is embedded in national policy which is driving the greening of economic sectors to support the creation of green and decent jobs, more energy and material efficient production processes, with significantly less waste, pollution and GHG emissions.

South Africa’s Green Economy Accord, signed in 2011, was the outcome of social dialogue between government, business and labour. It is the first multi-stakeholder effort to identify the tangible benefits of a green economy transition.

Since then, the enabling policy environment put in place by the South African government and public and private sector green investments have resulted in an increase of initiatives that seek to deliver environmental, social and economic outcomes across the country. These initiatives are innovative, practical and implementable, and are built on existing best practices in key sectors. They have real potential to bring about significant change and respond to critical issues such as resource inefficiencies in the water and energy sectors.

Upon request by the South African government, the Green Economy Inventory for South Africa (GEISA) was commissioned to assist with tracking, monitoring and evaluating existing green economy initiatives and programmes, to foster sector-wide coordination and coherence, and to help identify gaps and areas requiring further support.

The GEISA is a first attempt to capture a selection of green economy initiatives and provide a knowledge base of existing activities and help to prioritize work streams and actions under PAGE in South Africa.

South Africa’s vision of transitioning to a greener economy has been put into action through an extensive policy and regulatory framework. An overview of this policy framework indicates that a total of 32 sub-frameworks, strategies, policies or Acts enshrine environmental sustainability.

Within this framework, key actors in green economy initiatives in the country were identified; they tended to fall into one of seven groupings:

Most projects involved a variety of stakeholders to develop, implement and monitor green economy initiatives.

A Rapid Evidence Assessment (REA) method was used to review and assess a broad range of information on green economy initiatives implemented or on-going from 2010 – 2016. The REA helped to make the initial identification of initiatives and, through a sifting process, extract data.

A set of criteria (for example, the number of jobs created, geographical location of projects, funding sources and project partners, economic, environmental and social indicators, cross-cutting themes and circular innovation) were applied to identify green economy initiatives. Of the almost 1000 initiatives that were initially identified, 667 green economy initiatives were selected for further analysis. 357 initiatives had sufficient data and met the research criteria and were earmarked for analysis.

While the Inventory does not capture the full extent of ongoing green economy activities in South Africa, it does provide an indication of where activity is taking place.

The GEISA, developed over a three-month period in 2016, is a high-level inventory of green economy initiatives across sectors, spheres of government and service categories. The eight thematic areas outlined in the National Strategy for Sustainable Development and Action Plan (DEA, 2011) provided a framework to examine and understand the characteristics of green economy initiatives. These include their contribution to job creation, skills development and finance.

Due to the varied scales and agendas of green economy initiatives, a wide and diverse range of project partners operate horizontally and vertically throughout the country.