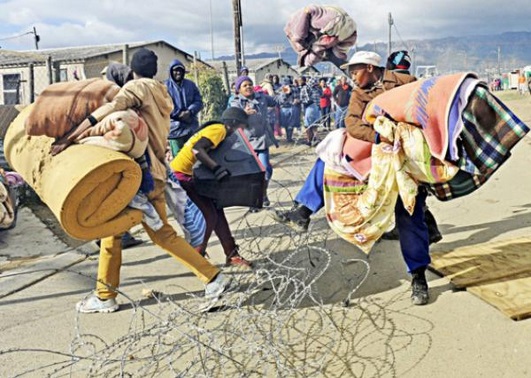 Last week I received a call from Ses’khona head, Loyiso Nkhona about the forced removals and demolishment of housing in the Lwandle informal settlement. I was due to meet with Loyiso yesterday out at the settlement. At 3pm he went into a meeting with the Minister of Transport and the Premier of the Western Cape. He asked me to go out and meet with a Ses’khona representative and community leaders. Which I did.

The Community Leaders first took us to the site of the forced removals. Desolate, utter, devastation. We then proceeded to the site where the building material is being stored by SANRAL. We heard accounts that corrugated iron and other material has been lost to theft as the storage site is completely unsecured, which we saw for ourselves.

Pulling up outside the community hall where the community is seeking refuge, we encountered a vehicle that had the words “Trauma Counselling for victims of violence and torture”. That humanity actually has such units … I have no words. The leaders took us to a room where they said they could put on a heater and we could consult. It was hard to find a room whose roof was not leaking and that offered refuge from the bitter cold. 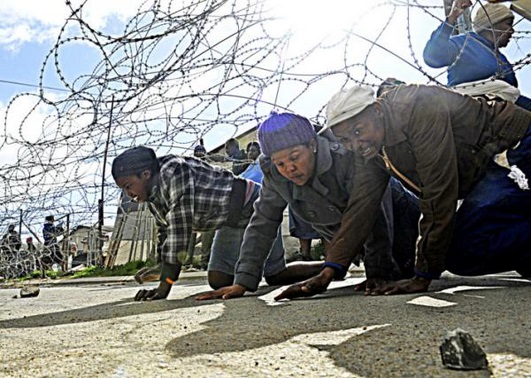 I noticed a sign setting out community initiatives. The one initiative was called “Don’t shoot the wounded.” I was devastated at the irony. I was about to meet with already injured humans who had suffered further injury. Already dispossessed humans that had been stripped of the very little they had. We eventually found a room. Heaters were put on and Mike and myself were offered tea and coffee which we gladly accepted.

I consulted with the community leader, Ses’khona representatives and some elders of the community. I heard that a 21 year old man had committed suicide by hanging himself after returning from work to find his home demolished. I heard of two pregnant women kicked by police. One 4 months pregnant, later lost her baby.

Another, 9 month pregnant whom I met later described being kicked in the hip as she was refused permission by the police to gather ID’s and birth certificates. I met with her and her 3 year old child who witnessed this. I had to go to her, as she cannot walk after the attack. 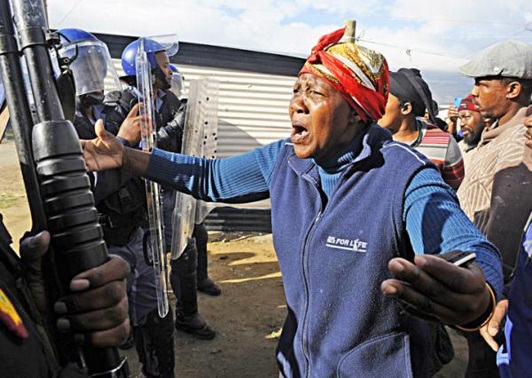 The community leader was stripped naked, shot at and kicked. She appears in court today on charges relating to swearing at police. There are 10 members of Ses’khona still in prison. They appear in court tomorrow. I addressed the community on how we will go about endeavouring to mobilize legal resource for them.

The first step is an information gathering and fact finding exercise. We will then assess applicable law (criminal action, civil claims and constitutional violations). I am meeting with lawyers and ADR practitioners tomorrow afternoon to set up an Access to Justice provincial substructure and intend to mobilize some local legal and dispute resolution resource.

Tragedy out of unjust administration

I am absolutely devastated that we live in a world where it is possible for the wounded to be shot, in so many ways. And the real tragedy is that this was born out of unjust administrative action. This means that it was a product of action/alternatively inaction of the governors of the region.

Peace on earth. Let there be peace on earth. Don’t shoot the wounded. Don’t stand by and watch the wounded being shot. Every single citizen of South Africa must rise up and send out a resounding message that we will not accept this. Get in touch with me if you are able to assist in any way. 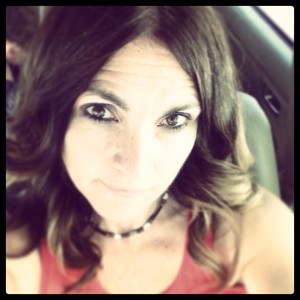 Photos by Cindy Waxa. For more check out the gallery at IOL News.