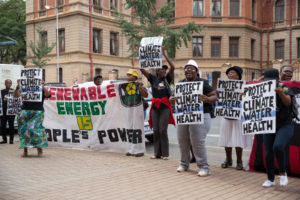 Activists from Earthlife Africa demonstrate outside the court during the hearing of the first Thabametsi coal-fired power station court case in March 2017. Image: James Oatway / CER

Major climate impacts and exorbitant costs have sounded the death knell for one of the last new proposed coal-fired power stations in South Africa: Thabametsi in water-scarce Limpopo.

Earthlife and groundWork argued in court papers that former Environment Minister Molewa had disregarded the devastating climate impacts of the 557MW Thabametsi project (originally approved for a capacity of 1200MW).

The setting aside of Thabametsi’s environmental authorisation means that, should it still plan to proceed, it would have to seek a new authorisation from the Environment Department – a major setback for the project.

Last month, South Korea’s state-run Korea Electric Power Corp, KEPCO, announced its withdrawal from its 50% stake in the Thabametsi project. Earlier this week, it was reported that both the Public Investment Corporation and the Industrial Development Corporation (IDC) had withdrawn their financing too, and the Development Bank of Southern Africa was quoted as saying that it was reassessing the project to determine if it was in-line with its policy of a “just transition towards a low carbon economy”. All South Africa’s private banks have already withdrawn their pledged funding for the project.

“In an environment where renewable energy is much cheaper than coal, any new investment in coal power is completely unjustifiable,” says Earthlife Africa director Makoma Lekalakala. “That is over and above the unconscionable health and environmental costs of coal, which are being borne by communities living in all our coal areas in Mpumalanga, Limpopo and KwaZulu-Natal.”

Thomas Mnguni, groundWork community coal campaigner, agrees. “This is a victory for environmental justice, the just transition and open democracy.”

Had it proceeded, Thabametsi would have been one of the most greenhouse gas emission-intensive coal-fired power stations in the world, and would have cost South Africa R12.57 billion in comparison to a least-cost electricity system.

The IDC, which faces criticism of its ongoing investments in fossil fuels, still seemed to suggest in reports that it would consider financing “clean coal” projects.

“Clean coal is a myth,” said Nicole Loser, attorney at the Centre for Environmental Rights who has led the legal challenge of Thabametsi. “There is no version of coal-fired power that curbs greenhouse gas emissions, or adequately mitigates all the harms of coal-fired power to the extent it is required. In any event, the additional costs of this technology make already-expensive coal completely uncompetitive with cheaper clean energy sources.”

Life After Coal is a joint campaign by Earthlife Africa Johannesburg, groundWork, and the Centre for Environmental Rights.