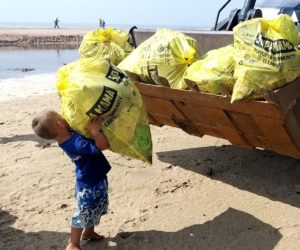 The event attracted 150 participants who joined in a clean-up at the lagoon to celebrate the network’s launch, removing more than 200 bags of litter (weighing more than 1 ton in total) from the area in an hour.

Explaining the importance of launching the KZN Marine Waste Network South Coast, Plastics SA Sustainability Director, Douw Steyn, said this is a much-needed project that was made possible thanks to the participation and support of industry partners across the entire plastics value chain. 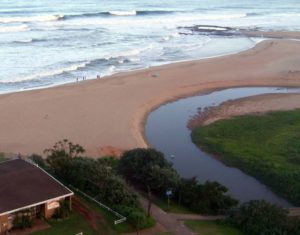 “As part of the African Marine Waste Network, various projects were initiated around South Africa in an effort to stem the tide of marine pollution. Following the successes we achieved with the KZN Marine Waste Network that was launched in Durban a few years ago, Sasol helped us to perform a baseline study to assess the current status of waste management and recycling in the KZN South Coast area. The results of this study clearly highlighted the need for river clean-ups, education programmes, buy back centres and other waste management projects in the Amanzimtoti and Isipingo regions,” Steyn stated. 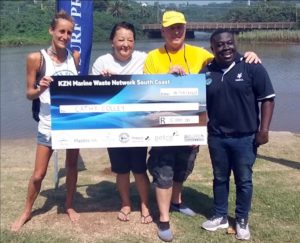 After heavy rains, litter affects the beaches along the KZN South Coast in particular as there are four large rivers that wash the pollution from surrounding river neighbourhoods to the sea and river embankments.

“It was therefore vital for us to launch a river catchment project that would focus on waste management and recycling, education and awareness, the setting up of litterbooms and regular cleanup campaigns. However, this would be impossible to do without the help of our Producer Responsibility Organisations (Petco, Polyco, the Polystyrene Association of South Africa and the Southern African Vinyls Association) and other industry partners,” he adds.

Although activities are currently being coordinated and managed by the Clean Surf Project, a South Coast steering committee has been formed consisting of industry, government and environmental organisations, who participated in the base line study and were involved in developing the project plan. 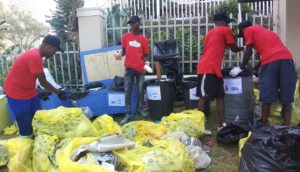 Another highlight of the launch was the handing over of a R5 000 cheque (sponsored by Plastics SA and Petco) to Cathy Colley, the winner of the competition to name the pilot project with her suggestion, “Inkwazi Isu”, meaning the African Fish Eagle Project. Cathy explained that the African Fish Eagle call is known as the “Voice of Africa” which is often heard across the Amanzimtoti River.

“Launching the KZN Marine Waste Network South Coast is directly aligned with the aims and objectives set by the SA Initiative to End Plastic Waste, i.e. solving the issue of plastic in the environment. It is significant in its ability to unite industry partners around a common goal and we are very excited about the future possibilities that this project holds. Not only does it offer a very real environmental solution for reducing waste in the environment, but it will also have very positive socio-economic spin-offs for local communities thanks to future job creation and youth development. We are truly fortunate to be part of such a significant initiative”, Steyn concluded.